1790 – Information from Matthew Yuill, Ayrshire is that Mossneuk Tileworks were situated on Woodside Estate. It used ‘local’ clay and got its coal from Lochriggs Coal Works on the West Bank of Kilbirnie Loch. The coal was transported by boat across the loch. This ‘Collier Boat’ belonged to the Earl of Crawfurd – 1790, Statistical Account.

1837 – Hugh Parker, Brickmaker, Woodside, Beith. (Page 248). (Note – SBH – I am not certain with works this reference refers to but I have recorded it here meantime). 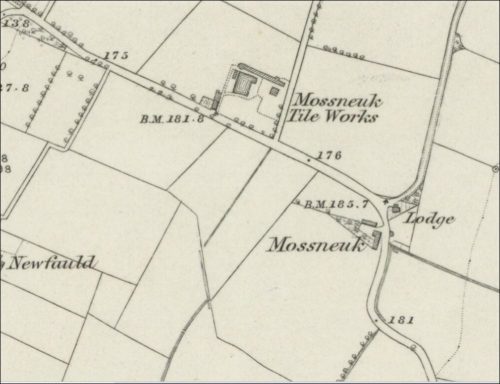 30/11/1872 – Ardrossan and Saltcoats Herald – Tile Work, Beith, Ayrshire. To be Let, for any number of years as agreed on, with immediate entry to the work and land, and to the Dwelling at Whitsunday next: That going tilework near the Beith Station of the Glasgow and South-Western Railway, and on Woodside Estate commonly called Mossneuck Tilework, with dwelling house, and upwards of nine acres of land, hitherto possessed by Mr James Boyd, who does not offer. The work is conveniently situated, being toll-free to the adjoining Station, and in an extensive district, where there is no other similar work; and in the hands of an enterprising tenant, could not fail to secure an extensive sale. Henry Brown, South Lodge, Woodside, will point out the work and clay fields to enquirers; and Offers are to be lodged with Love and Williamson, writers, Beith, on or before 1st January next. The proprietor does not bind himself to accept the highest or any offer. Beith, 25th Nov 1872.

11/06/1873 – North British Daily Mail – Beith, important capture – Sergeant McInnes here got information regarding a strolling fiddler and his wife, who had stolen a hen from Mossneuk Tilework. The sergeant followed the pair to Kilmarnock, where he ran them down and found the hen. Taking the precaution to search the male owner, he found, firmly packed in the toe of each of his hoots, eight one pound notes, doubtless the accumulation of some other plundering. The prisoner gives the name of James Corr.

Woodside House, Beith … The fireclay coped boundary wall gives character to the roadside and the copes may have been produced at the Mossneuk Tileworks which, until the mid to late 19th century, were located to the south-west of the grounds.