(Note – SBH – The following page has been created as I believe that the Scottish born and educated, Norman Macbeth, who later created Macbeth Brothers and Co Ltd, Agents, Bombay, India, also routinely ordered bricks from the Etna Brickworks, Armadale, West Lothian, Scotland and had them stamped ‘Macbeth Bombay’. He then exported these to India as part of his large merchant based business)

He was educated at Edinburgh Academy, and later at Friedrichsdorf, Germany.

At the age of sixteen, he commenced to serve his apprenticeship at the Heriotfield Paper-Making Machinery Works, Edinburgh. While with this firm he obtained a wide experience in the design and installation of paper-mill machinery, both in Scotland and in Germany.

In 1871 he worked in the drawing office of Messrs. Tod and McGregor, shipbuilders, Partick, Glasgow, and two years later went to Messrs. John and Edward Wood, Victoria Foundry, Bolton, with whom he was connected until 1904 as business and technical manager. During this period the business of the firm was extended very considerably.

He was a pioneer in the adoption of triple-expansion engines in textile factories, and some of the more valuable of his inventions were in connexion with universal metallic stuffing-boxes and high peripheral speed rope-pulley fly-wheels of steel construction.

In 1882 he formed a partnership, in conjunction with his brother, under the name of Macbeth Brothers and Co., who have since carried on a successful and rapidly expanding business in Bombay and Calcutta, as machinery agents, importers, and engineers.

He retired from active business in 1913.

His death took place at his residence at Woldingham, Surrey, after a long illness, on 9th March 1914, in his sixty-fourth year.

He was elected a Member of this Institution in 1883.

18/06/1901 – Hoosier State Chronicles – Norman Macbeth to Introduce Indianapolis Made Engines. Norman Macbeth, a junior member of the firm of Macbeth Bros. & Co., engineering merchants of Bombay, India, arrived In the city yesterday and Is at the Columbia Club, a guest of H. H. Hanna. He will be here ten days or two weeks and will go to his former home, St. Annes, England, to return to India In October. “We sell engines and mill stores In Bombay,” said Mr Macbeth, “and I am here to arrange for my house to sell Atlas engines In India. There are, I believe, no American engines In India, but there is some American-made machinery In use there.” “You will excuse me from talking about starvation In India. The ordinary observer who is not looking for it does not see much of it. The bubonic plague which has been raging In Bombay and which, at its height, carried off 300 victims a day, Is measurably subsiding, as It does In the hot weather. The deaths now number about 100 a day. The cotton industry is the chief thing in Bombay. Although I have travelled over northern and central India, I have no observations that are worth giving.” Mr Macbeth, at his home in England, had some reputation as a golfer, and Indianapolis golfers all endeavour to entertain him during his stay on the Country Club links. This is his first visit to the United States.

04/01/1915 – The Straits Times – The death is reported in England of Mr J.B.K Macbeth, senior partner of the well known firm of MacBeth Brothers of Bombay, London and Calcutta.

30/01/1917 – London Gazette – In the Matter of Macbeth, Taylor and Co. Limited, and in the matter of the Companies (Consolidation) Act, 1908. Notice is hereby given, that a petition was, on
the 18th day of January 1917, presented to the High Court of Justice by the above-named Company to confirm an alteration of the provisions of the memorandum with respect to the said company’s objects proposed to be effected by a Special Resolution of the said Company, duly passed at an Extraordinary General -Meeting of the said Company, held, on the 1st of December, 1916 and subsequently duly confirmed at an Extraordinary General Meeting of the said “Company, held on the 18th December 1916, and which Resolution is as follows:—
” That the provisions of the Memorandum of Association be altered by cancelling the existing Memorandum of Association, and by substituting the following Memorandum of Association therefor,
namely:—
” (a) ‘To carry on the business of commercial and general agents and primarily to act as commercial agents in the United Kingdom for Macbeth Bros. & Co. Limited, of Bombay, in the Empire of India.
” (b) To carry on the businesses of exporters and importers of and dealers in merchandise of all kinds; forwarding agents, freight agents, loading agents, and general merchants …

1918 – 1945 – A history of GKN  … GKN, which sold a variety of products to the sub-continent through its agents, Macbeth Bros. & Co., was anxious to establish a manufacturing base and network of wholesale outlets …(1931?)

07/12/1926 – Bombay Presidency Agricultural Show – Macbeth Bros. and Co., Ltd., Kodak House, Hornby Road, Bombay, are agents for the McCormick Deering tractors, tractor ploughs and other implements, which are manufactured by the International Harvester Company of Chicago. In the tractor line they demonstrated a 15-30 h.p. and a 10-20 h.p. model, each a sturdy and businesslike job. This tractor is built up on a very heavy boat-shaped one-piece frame lions big the engine and gear transmission. The engine is of the orthodox four-cylinder o.h.v. type, the .larger model being of 41-in, by 6-in, and the smaller 41-in. by 5-in. bore and stroke, each running at 1,000 r.p.m. In conjunction with the tractors, Messrs. Macbeth demonstrated three types of International cultivator, four models of harrow (peg-tooth and disc), a 30tooth rake, a seed drill for bullock power (8-hoe, 8,1n. spacing), and nine types of plough.

Below – 1929 – Handbook and Directory of the Concrete Industry in India  – Macbeth Bros and Co Ltd, Kodak House, Fort, Bombay are listed under the following headings ‘Asbestos Cement products’ and ‘Washers for sand and aggregates’ and ‘Piling Plant’ and ‘Roads, Concrete, Plant and Machinery’ and ‘Mixers’ and ‘Crushers’ and ‘ Block, slab and Brick Making Machines’ 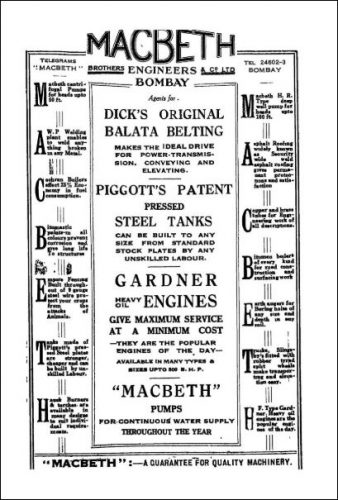 Below – 1932 – Directory of Bombay – Agents and General Dealers – T.A ‘Macbeth Bombay’. Throughout the directory they are listed as agents for countless different companies, producing a myriad of products in the UK and USA. 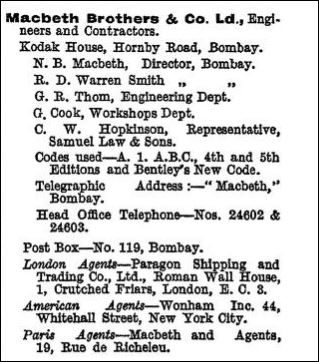