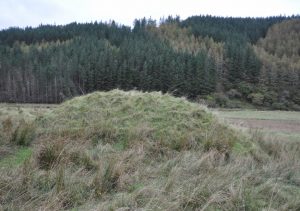 Please see this page on my website which relates to Allan and Mann Glasgow bricks being used to construct a lodge at Waternish – click me.

A local at Waternish has suggested that the bricks found at the lodge came from a brickworks in ‘Bay’ – Waternish is on the shores of Loch Bay.  The Allan and Mann bricks definitely were not manufactured on Skye but perhaps there are other unmarked bricks lying around which may have been manufactured in a small local works?

In 2013,  Nick Basden was on the Isle of Skye and had occasion to speak with a local at Bay, Stein, Waternish. Bay is basically an area of 2 to 3 houses.  There were several hummocks in the grassland and a local suggested that these were overgrown mounds of clay which was brought into the end of the loch and dumped. There was also a suggestion that a nearby white coloured cottage had internal walls constructed of ‘Stein’ made bricks. (Not Stein as John Gilchrist Stein, fire brick manufacturer, Castlecary and Whitecross etc).

George Kozikowski states – ” “just before Stein is Bay (Hence Lochbay) with some of the ruinous buildings still identifiable. They used the local clay and made bricks and field drain pipes and may have used local lignite as a fuel source. I have an example of a pipe given to me by someone in Harlosh. I was taken to the site some 10 years ago by someone who was researching it but can’t remember his name”

27/01/1847 – Inverness Courier … Another correspondent mentions that MacLeod of MacLeod is making preparations for commencing a brick and tile work on the farm of Bay. A person has been lately on the spot (engaged from Northamptonshire) to conduct the preparatory operations and the locality is said to be highly favourable for a brick manufactory.

Below – 04/01/1848 – Inverness Courier –  The farms of Claigain and Bay for lease … There is a house at Bay which is at present occupied by the Superintendent of a brick and tile work lately established by the proprietor in whose hands both farms have been for some time … Proprietor MacLeod of MacLeod, Dunvegan Castle, Dunvegan. 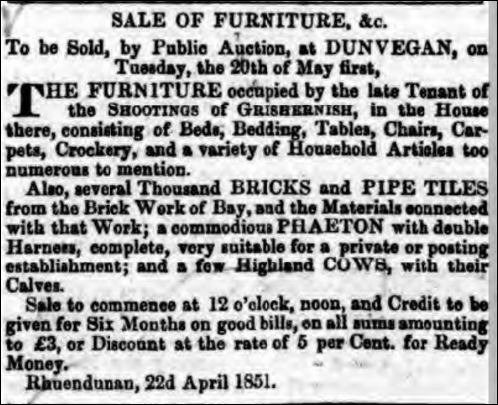 Below – 1877 – There is a reference to an old lime kiln situated at the end of Loch Bay. (On the 1901 map, the kiln structure is still shown but it is not detailed as being a lime kiln so I assume it was disused by this point) 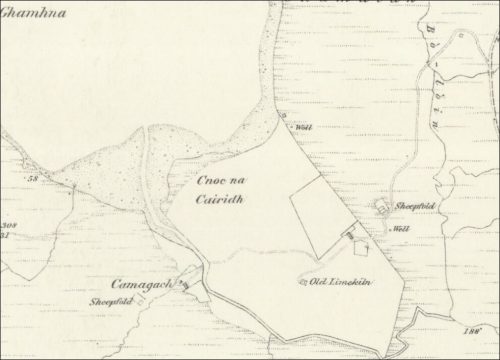 Many thanks to the Skye and Lochalsh Archives for the following corroborative information with regards to the presence of a brickworks on the Isle of Skye.

Feb 1952 – Clarion of Skye No 13 – Page 5  – ‘The builders, masons, and other traders in the West of Skye suggest that steps be immediately taken to re-start the long idle brick ovens (now in ruin) at Bay.  In olden days there were three different types of excellent quality bricks, manufactured there.  Now, with the tremendous increase in freight, this industry, if revived, could provide Skye with more and cheaper housing schemes.  The clay available is said to be as good as any to be found in Great Britain.  It is hoped that steps be immediately taken to resume this wanted industry.’

1986 – The Chiefs of Clan MacLeod, Alick Morrison – Page 200 – An entry regarding the 25th Chief Norman MacLeod. He was born on 18/07/1812 and died in Paris on 05/02/1895. He became Chief in 1835.-  “There was considerable unemployment at this time.  It was a period of comparative peace and the demand for Highland soldiers had fallen considerably: the kelp industry had been ruined by the free trade policy of the Government.  MacLeod made several endeavours to redress the situation.  He set up a brickwork from local clay at Bay: he secured the contract of bringing the mails from Inverness to the Isle of Skye.  He bought the ‘Atlanta’ and the ‘Blossom’ to engage in local and foreign trade.  All these enterprises provided employment but MacLeod was to lose money on them all.”

Below – 2013 – Photographs of the possible clay mounds as taken by Nick Basden. 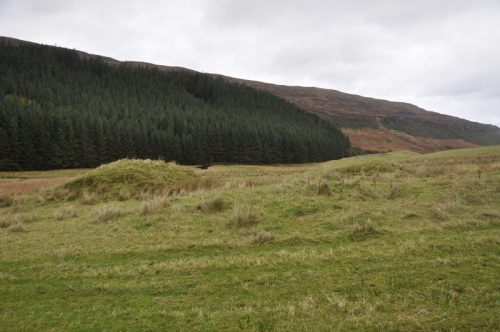 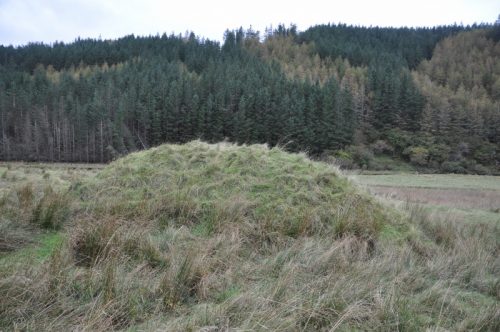 Below- 2018 – Many thanks to Joan Carson who forwarded the following 3 photographs of the suspected clay mounds at the Bay Brickworks and to her father Norman Carson who donated a Syke brick and drain pipe. The brick is from Normans house which is located near to the brickworks and the drainage tile was found on-site also. 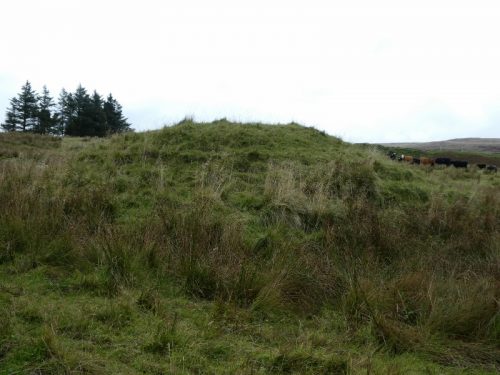 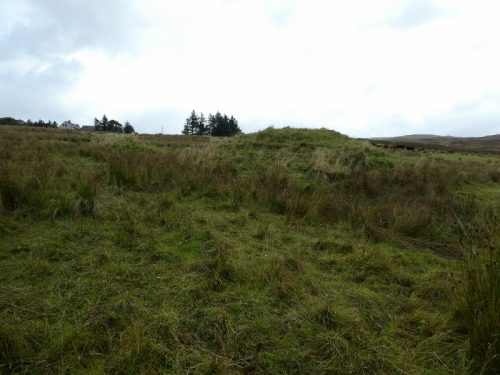 Below – All 3 clay mounds can be seen in this 1 photograph. 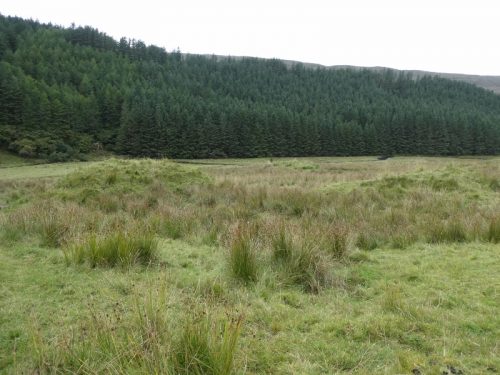 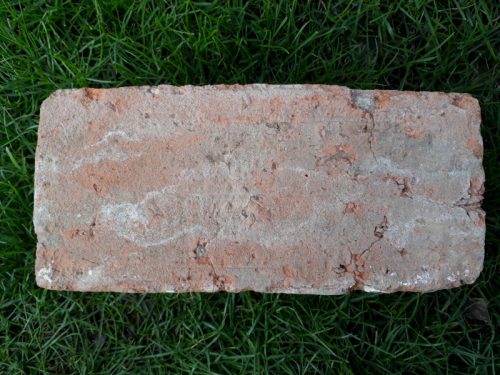 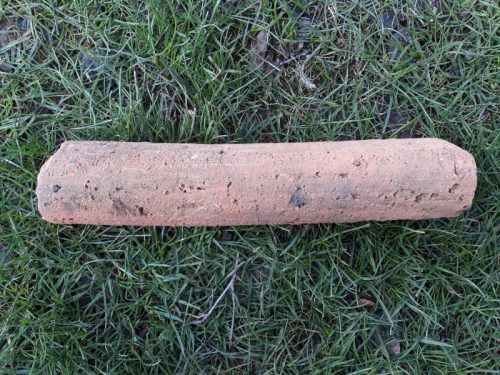 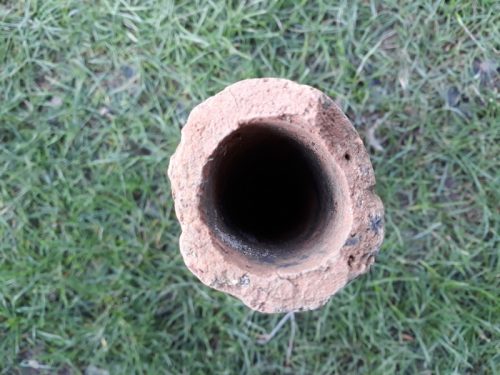 Below – An undated pamphlet on the Industries of Skye and Lochalsh. The ‘brick’ logo on the map indicates that the brickworks were situated at the end of Loch Bay just where the lime kiln was situated. The following photos were again kindly forwarded by Nick Basden. 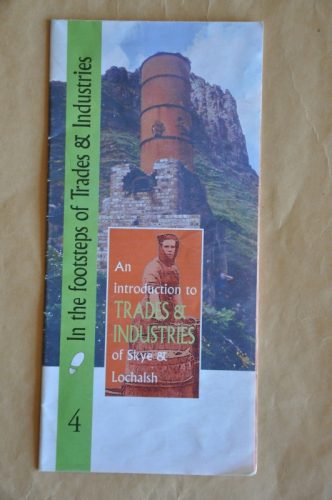 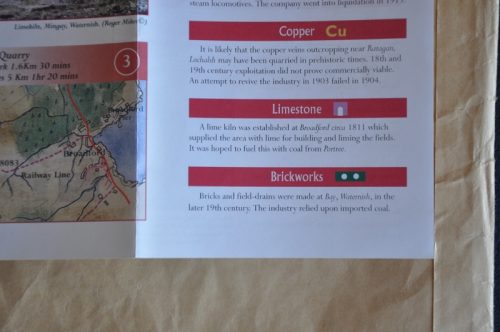 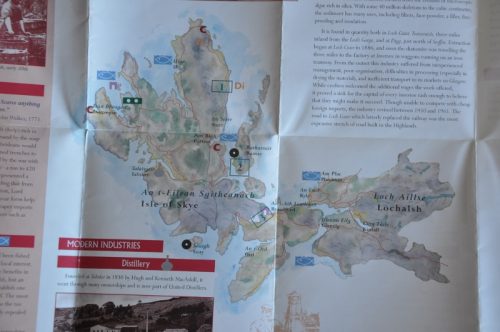 Below – 2 bricks found at Loch Bay by Nick Basden and believed to be products of the brickworks there. 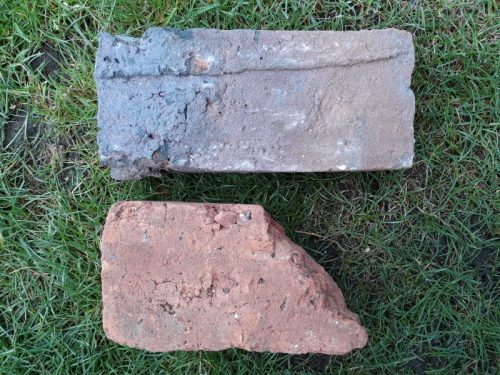 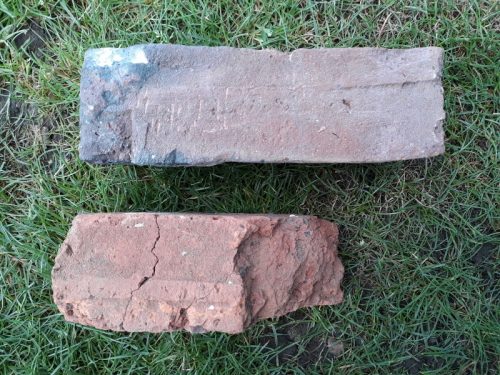