Below – Graham Dolan has kindly forwarded the photo of a brick situated in the exterior wall of Ayton Community Hall. He states ” The local community hall here was refurbished a few years ago.

It was built with local bricks from Linthill Brickworks which was near Eyemouth, probably in the 1870s or thereabouts.

We aren’t sure of the dates. Interestingly we found a brick with a handwritten name: Robert Cockburn, Lint Hill, Eyemouth” 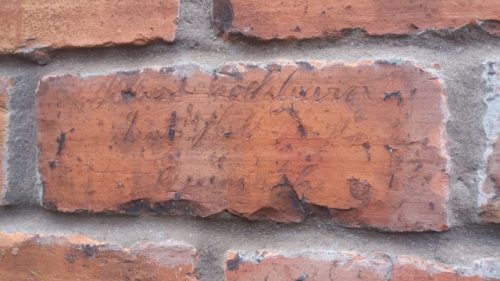 With regards to the above, I do believe the brick is inscribed Robert Cockburn, Linthill Tileworks, Eyemouth (the ’tileworks’ reference theory takes a little creative interpretation and may I well be wrong !)

Below  – 30/05/1829 – Newcastle Courant – John Cockburn ( 15) Linthill, Eyemouth dies at Fishwick after a cart accident. (Possibly related to Robert Cockburn above?)

Below – 27/05/1847 – Stirling Observer – Eligible investment – Clay fields at Linthill, Eyemouth. To tile and brick manufacturers. Eligible investment to be let, a stratum of clay, situated on the Farm of Linthill, in the parish of Eyemouth and Shire of Berwick, reported on as well adapted for the manufacture of Bricks and Tiles. Pits have been sunk, which show that the clay is at least six acres in superficial extent, and about thirteen feet thick. Below the clay, there is a stratum of sand about two feet thick; below the sand, there is water-bearing gravel. It is calculated that thirty-five millions of drain-tiles, of different sizes, may be made from the clay already proved. The distance of the nearest brick and tile work is seven or eight miles and of the next nearest thirteen or fourteen miles.  These are the only two tileworks in the eastern half of Berwickshire.  To the north, no work exists within thirty miles. The bed of clay is about 3000 yards from a turnpike road, which leads on one hand to the seaport of Eyemouth (distant about a mile), and on the other hand to Ayton, Press, Coldingham, Muir, and other properties, on which drainage is likely to be soon commenced. From the high prices of tiles in Berwickshire, and the increasing demand, it is the opinion of competent judges that a tilework in this district after deducting 7 1/2 per cent, on the capital invested, and allowances for tear and wear, and for rent, would yield to the lessee a very handsome profit. As no pipe tiles are made in Berwickshire (except partially in one work), there is a good opening for that species of manufacture. Any party desirous to obtaining a lease of this bed of clay, may communicate to David Milne, Esq., No 10, York Place, Edinburgh, the terms on which he would take it, and may see in his hands the reports by Professor Johnston, and Mr Livingston, tile manufacturer, Portobello, on the quality of the Clay. Offers must be lodged on or before the 10th of June. Mr Delgaty, the tenant of Linthill, will show the spot (Not to be Repeated.) Edinburgh 13th May 1847. 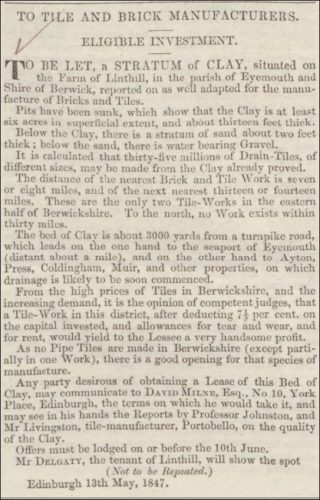 1848 – Plan of Linthill Tileworks. Held by National Records of Scotland. 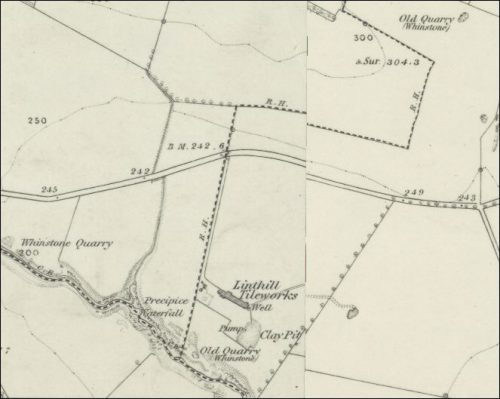 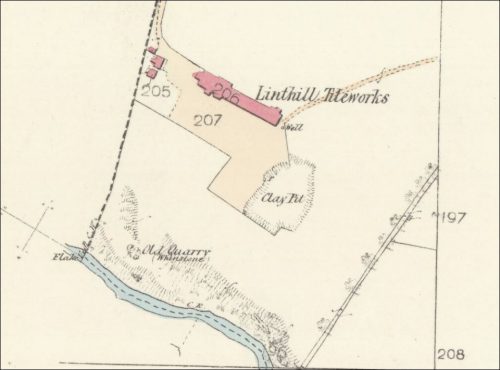 1856 – 1858 – Linthill Tile Works – A small brick and tile works on the farm of Linthill, with small cottage and garden attache. It is the property of D.M Home Esq, Milngraden.

11/02/1859 – Kelso Chronicle – Sudden death – As one of the workmen engaged in making tiles at Linthill Brick and Tile Works on Monday 31st inst, he complained of being unwell and immediately after he expired. No cause is assigned for his sudden decease. He has left a wife and family to deplore his loss.

23/06/1866 – Glasgow Herald – Brick and tile work to let on Billie Estate. The brick and tile work of Linthill situated in the parish of Eyemouth and County of Berwick, presently occupied by Mr Thomas Armitage. Linthill is within 3 miles of the Ayton and Burnmouth Stations of the N.B Railway and there is a good demand in the district both for bricks and tiles. Further particulars may be learned on application to James Bowhill, writer, Ayton in whose hands a draft of the proposed lease may be seen and with whom offers may be lodged until Thursday the 5th of July next. The Barony Officer at Eyemouth will point out the premises. Ayton 13/06/1866

Below – 1871 – Scotland Census – although  the link below refers to the Pertue family, this appears to be a translation error and the family are called Virtue

11/04/1876 – Berwickshire News and General Advertiser – County of Berwickshire – Billie Estate – To be let. Linthill Brick and Tile Works in the parish of Eyemouth with the dwelling houses, sheds, kiln and other buildings and erections, all as presently possessed by Thomas Armatage with entry to the same at Martinmas 1876 … 08/03/1876. 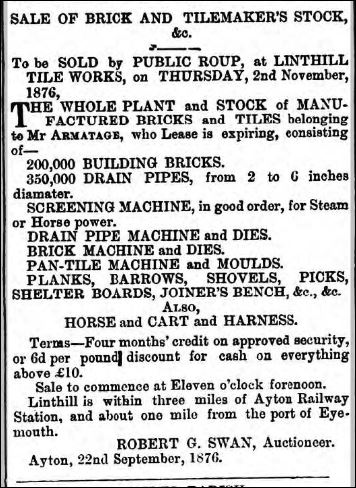 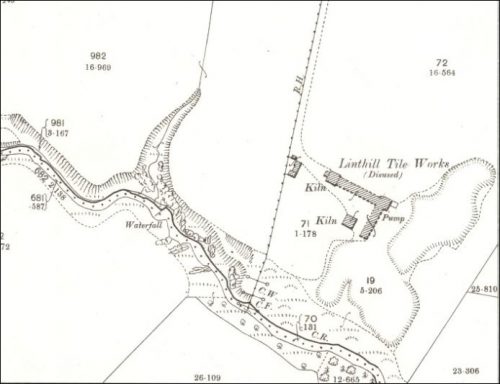 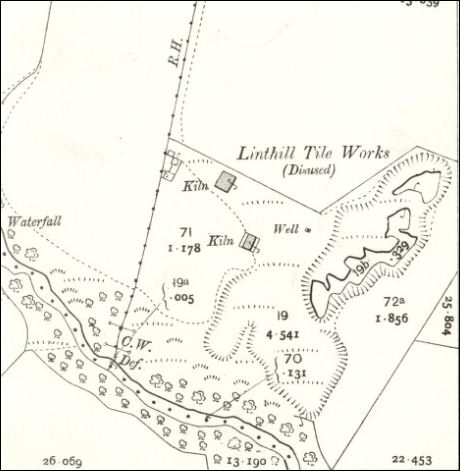 Below – In October 2016, I visited the Ayton Community Hall and took the following photos of fingerprints and boot marks that have been imprinted on the bricks while they dried on the ground after being moulded and prior to being fired in the kiln. 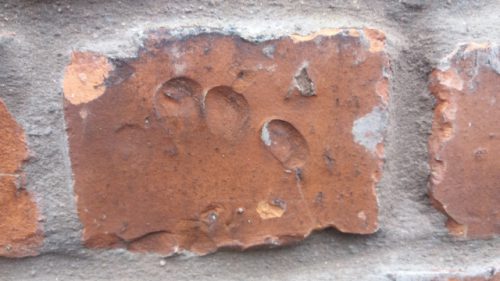 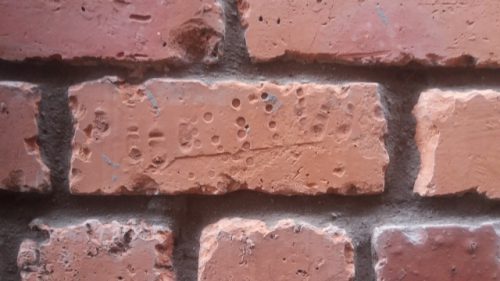 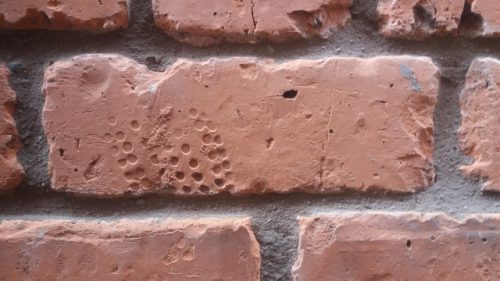 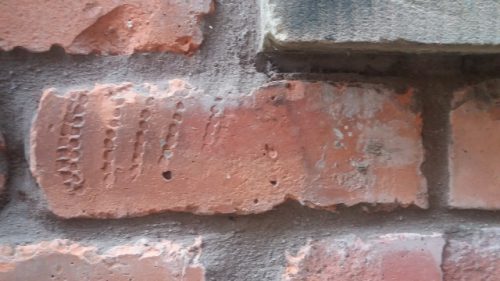 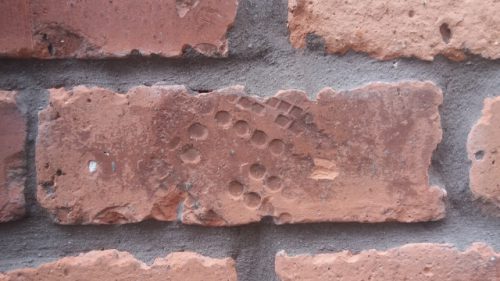 Below – A worn brick in the Community Hall wall and confirms the bricks were cored or holed. 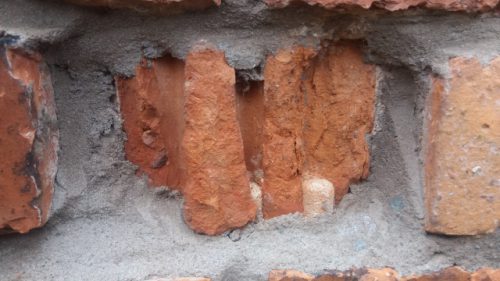 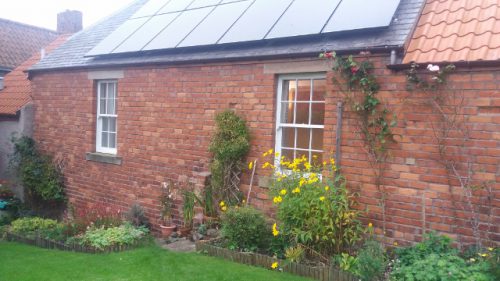 Below – The neighbouring building appears also to be built with the same Linthill brick. This was the local bakers originally and was also at one time owned by the Armatage family who also owned the Linthill Brick and Tile Works at one period in time. The walls appear to be double skinned bricks and every 5th course the bricks are turned 90 degrees so the header faces out and bonds the wall together. 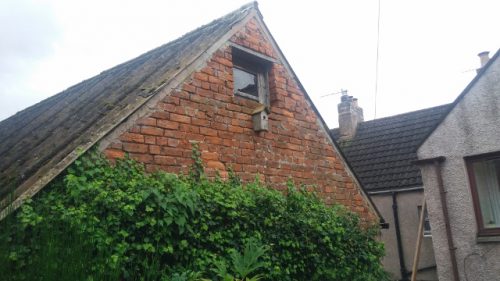 The current owners of the bakery had recently knocked down part of an adjoining building which was also built from the same brick as the bakehouse and therefore presumably Linthill bricks. They kindly donated the following 3 bricks which I believe were manufactured at the Linthill Brick and Tile Works ( photos to appear later).

Below – These four bricks were kindly donated by Ian Stebbing. They formed part of a stable adjoining a house in the middle of Eyemouth and are believed to have been manufactured at the Linthill Works. The 2 on the left show their stretcher faces and the 2 on the right show the normal bed face. 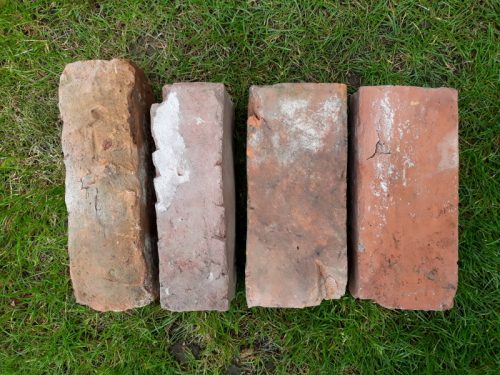 The following photos are of the Eyemouth Viaduct.

This viaduct was originally opened on 13 April 1891 to carry the privately-promoted Eyemouth Railway across the Eye Water into Eyemouth. Severe flooding in August 1948 caused grave damage to the structure, including severe foundation-scouring and the collapse of the central pier. New concrete foundations were laid and new cutwaters added as part of the reconstruction before the line was re-opened on 29 June 1949. The line closed to traffic on 5 February 1962.

It is believed the original piers were made from Linthill brick. Certainly they have the exact same appearance as those used to build the Ayton Village Hall. The bricks used to construct the viaduct were also the holed or cored variety but for added strength, every 2nd course was used to bond the course below by laying them with the headers facing outwards.

Below – the photo on the right shows the pier that was rebuilt after the flood damage to the fore. 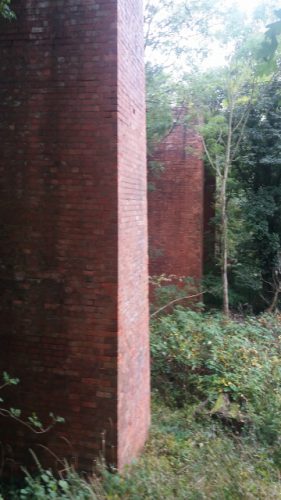 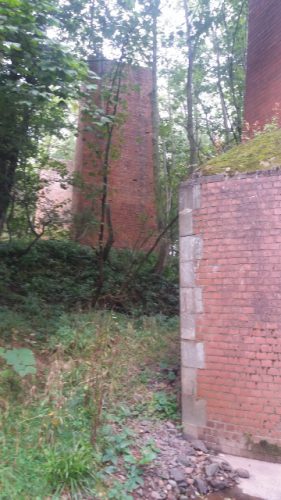 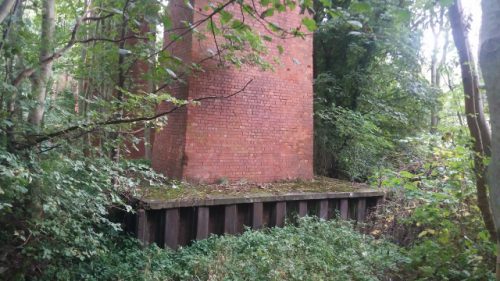 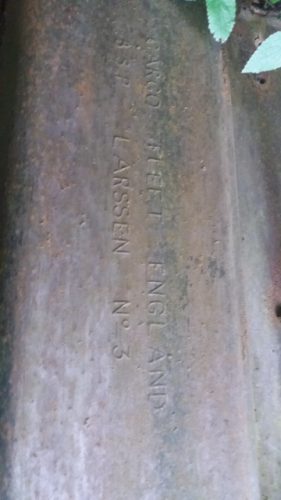