The following items were found in spoil heaps associated with the Bonnyside Brickworks, Bonnybridge.

These items are all related to works carried out in the laboratory at Bonnyside Brickworks.

Most large fire clay works, as Bonnyside was, employed chemical analysts and technicians etc in an on-site laboratory. Their products and no doubt the products of opposition works were subjected to many varied tests to establish quality and durability. Indeed the base clays were tested and manipulated to create ‘designer’ bricks fit for every industry and every situation.

The brown/black handwritten stamps were apparently written with manganese dioxide powder mixed with water. This was used for marking brick samples to identify them after testing at temperature. The dioxide being refractory did not run and slag off the surface to be measured etc. For higher temperatures, cobalt oxide was used.

The brick and half brick samples along the top of the  first 2 photos below seem to be all stamped with an ‘L’ – does this represent something in particular.

Many samples have an ‘X’ marked in one corner and many have the corners marked into squares, often on two faces. 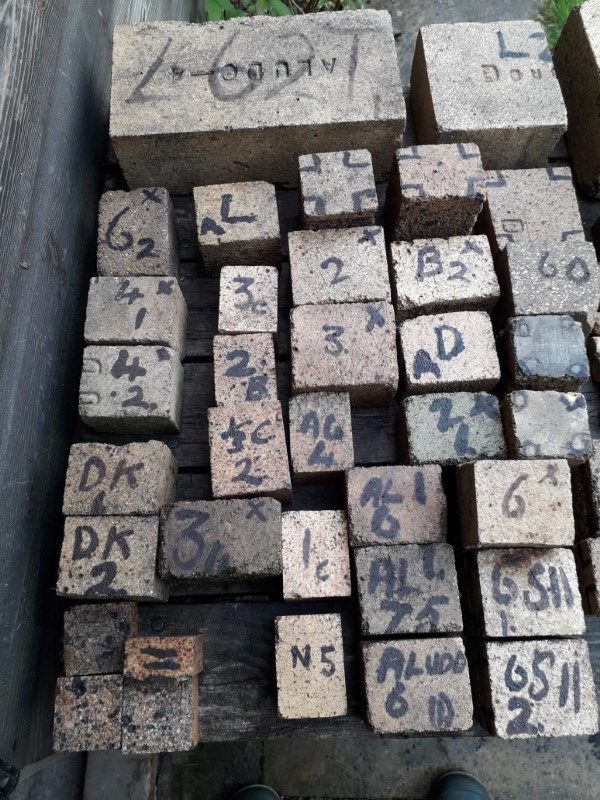 Below – In the middle of the photo, there are 2 blocks, one above the other. In each corner of the face shown there is a round circle. Harry Wilson states –  The flat surface samples with the marker rings in each corner are possibly reheat test pieces being measured before and after firing in the lab to record any shrinkage. The reheat test samples corner rings are probably manganese dioxide painted on prior to testing marking the measuring points. 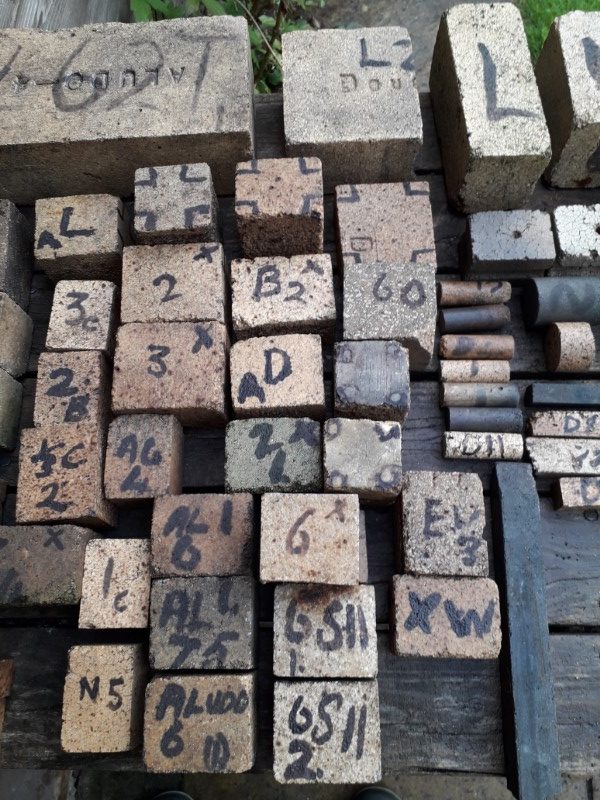 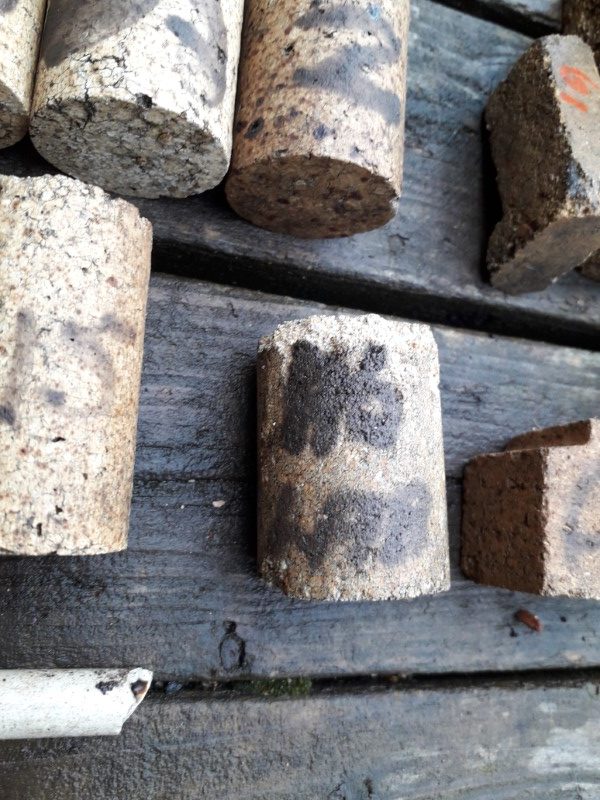 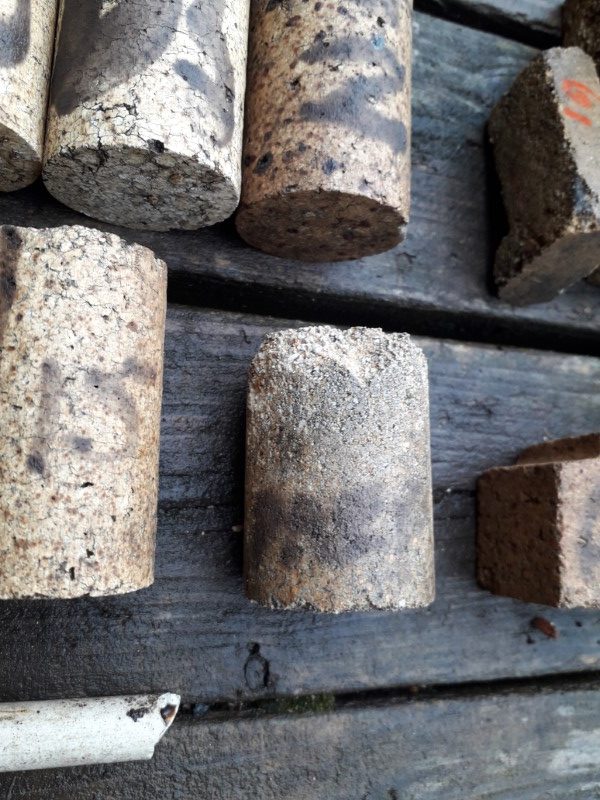 Below – One sample definitely marked ‘Lab’. Another shows where it has been cut with a Stihl saw or similar but the cut piece has been broken off. 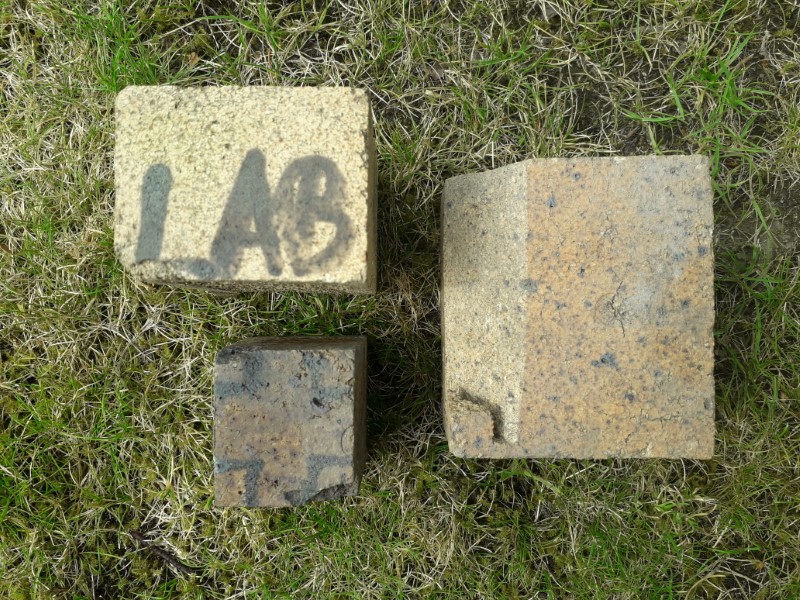 Below – The disc core on the right is a core from an insulation bricks. It is very light and floats on water. 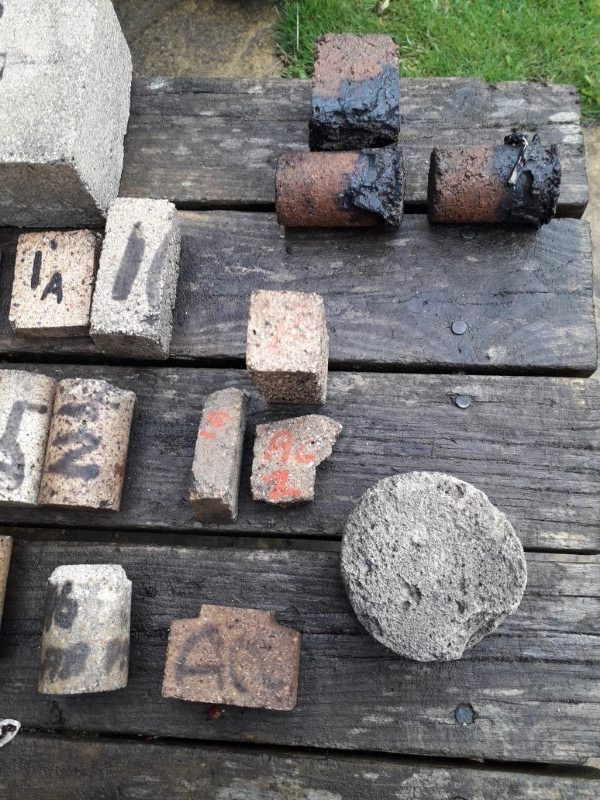 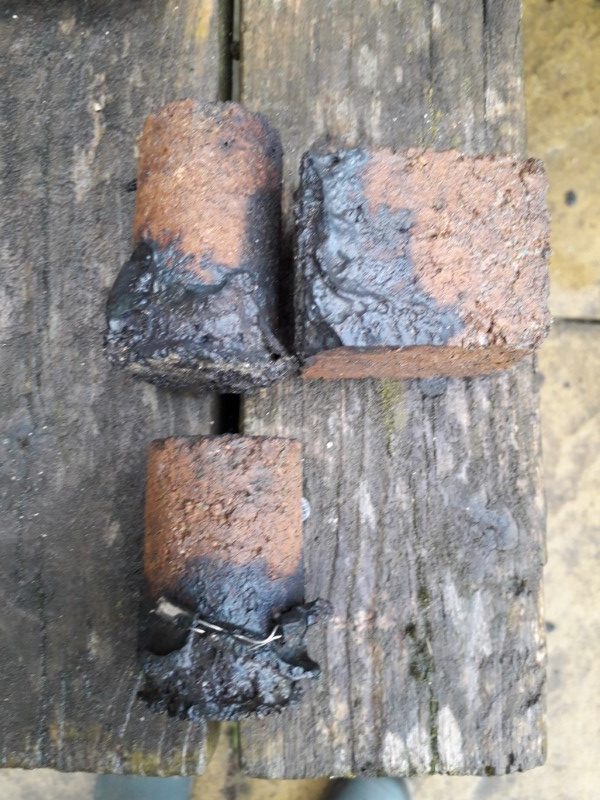 Below – This is an interesting test core (3″ long). It shows obvious burning along with electrical components attached. Harry Wilson states –  this is the result of a rudimentary slag test. The two wires in one are the end of a Pt/Rh thermocouple. Platinum/Platinum-Rhodium thermocouples are used for high temperature recording up to 1600 degrees centigrade when two dissimilar metals are joined at one end in this case a Platinum wire and a Platinum wire containing 5% Rhodium which on heating the joint end an EMF is generated which increases with increase in temperature this is known as the Peltier effect and an be recorded on a temperature scaled instrument.

The ceramic thermocouple tube (white tube photo above) is a protection for the wires with only the jointed bead end being exposed. 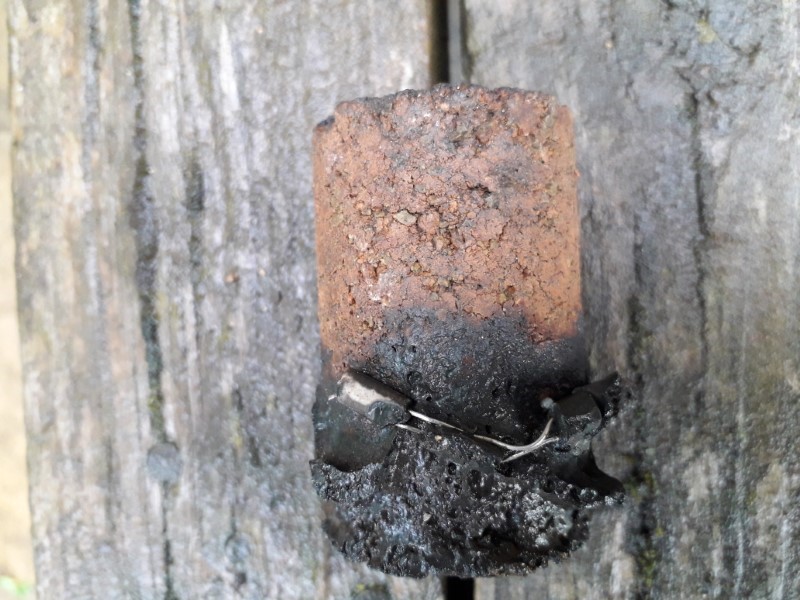 Below – Aludo 4 brick with test stamp L62T. This has been added to the bed and the stretcher faces. 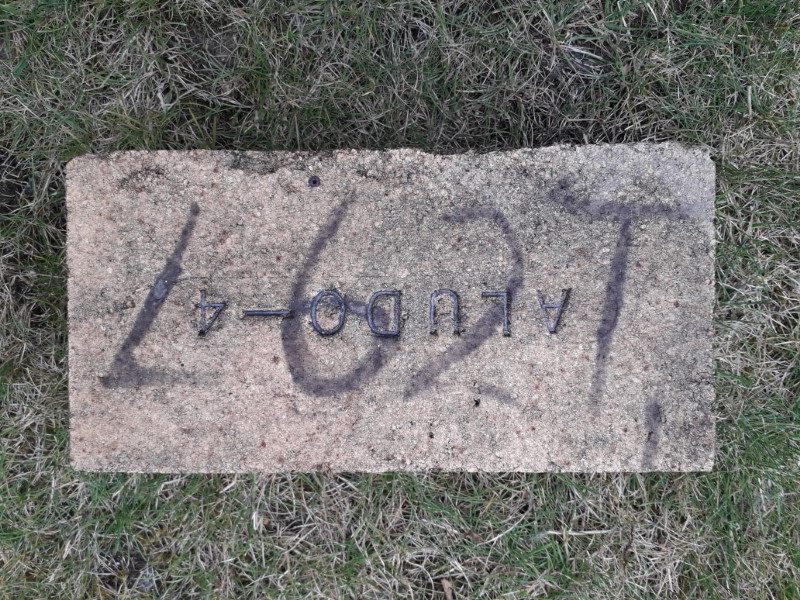 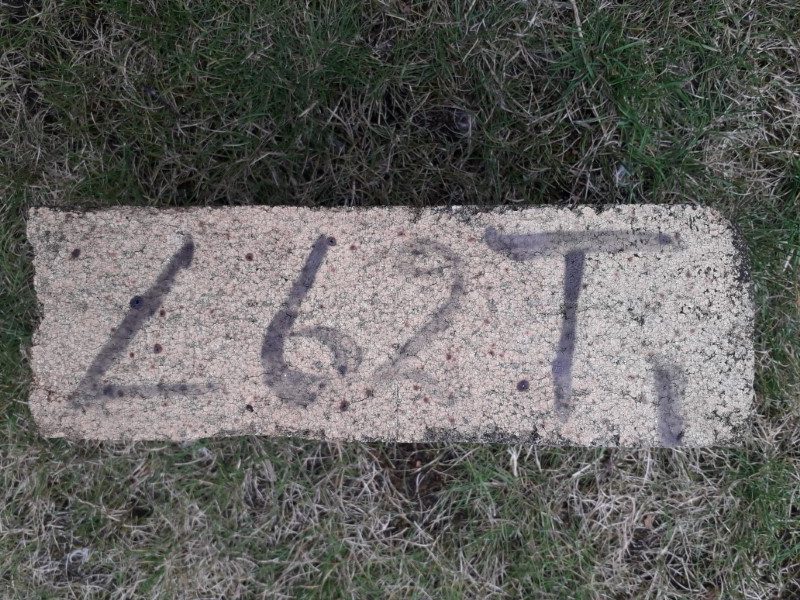 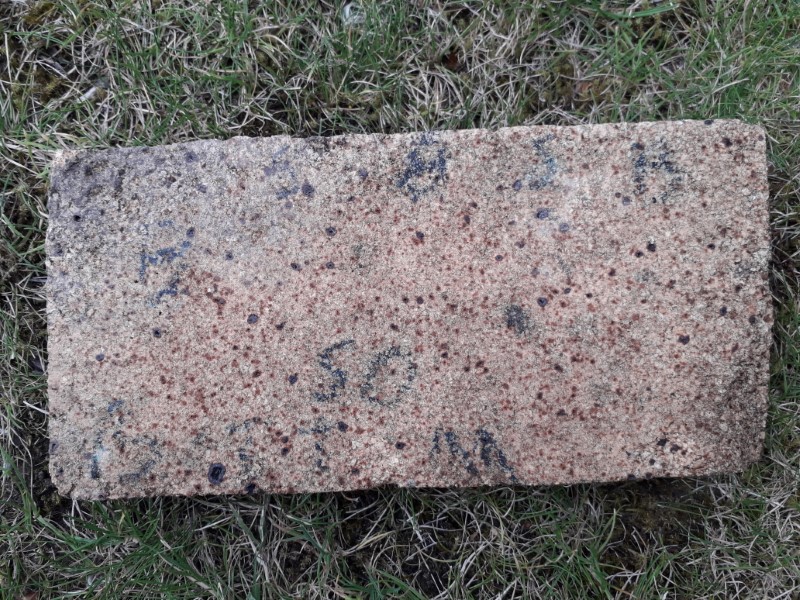 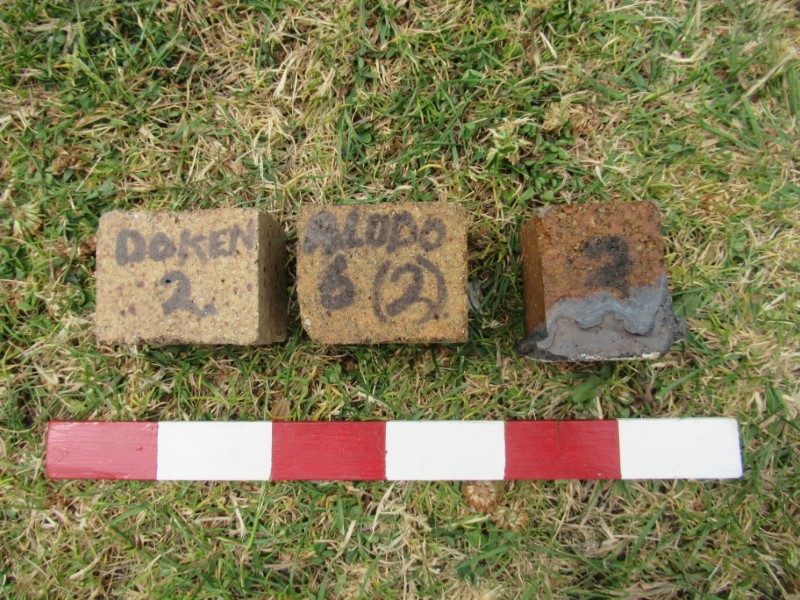 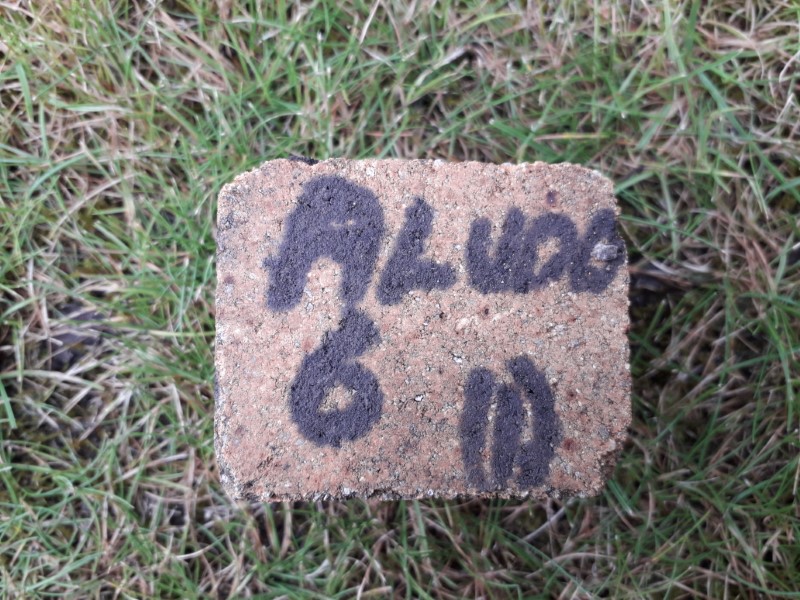 Below – The reason for the marks in the corners of these samples is unknown. The pencilled-in letters below are highlighting the original stamps on the diced-up brick. They may be letters from a brick stamped ‘Thistle’. Thistle was a competitor’s brand and it appears tests were being undertaken on the bricks from other fire brick manufacturers. 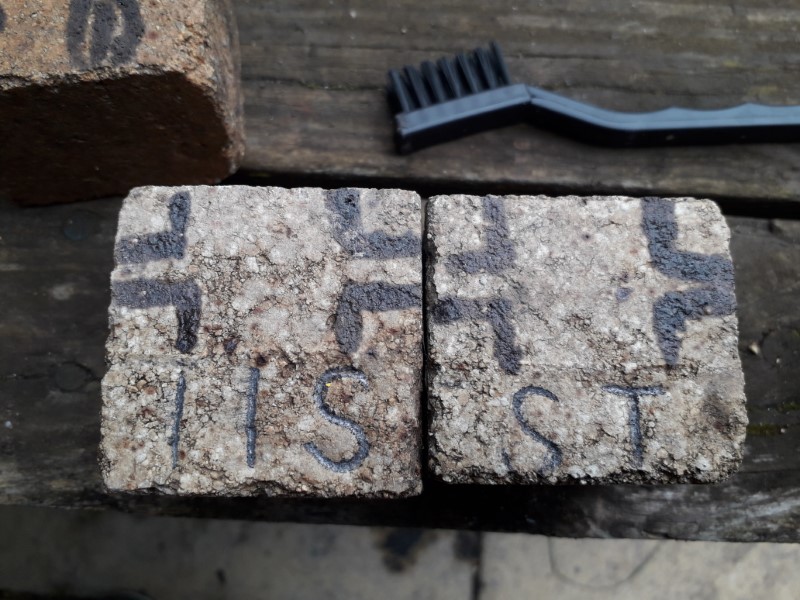 Below – An unknown stamp on these test samples – ‘V &’ – This partial stamp is not instantly recognised. Both bore the handwritten stamps possibly reading 6511, 1 and 2. 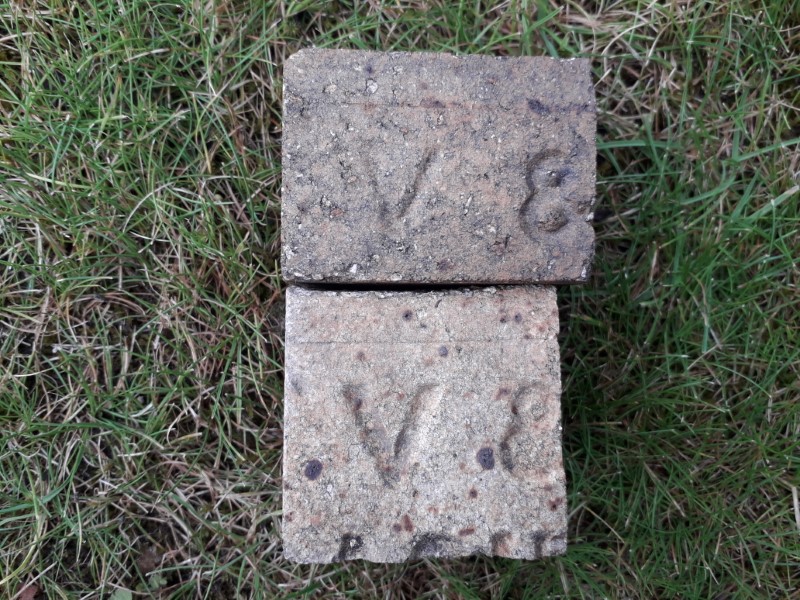 Below – A ‘docken’ brick that has been marked up’Lab 3 and Car 5′ on two sides. When bricks were fired in a tunnel kiln they were stacked on carts or cars that rolled along rails within the kiln. This sample looks to have been taken from car no 5. 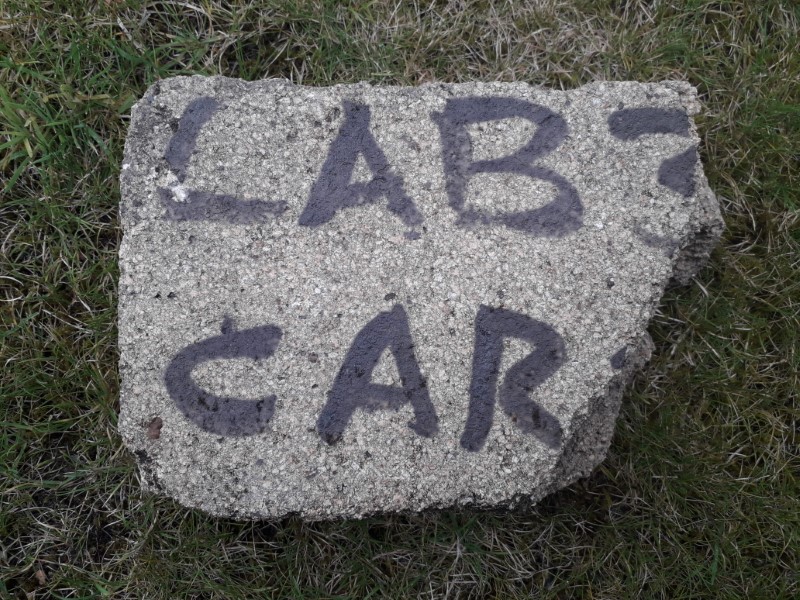 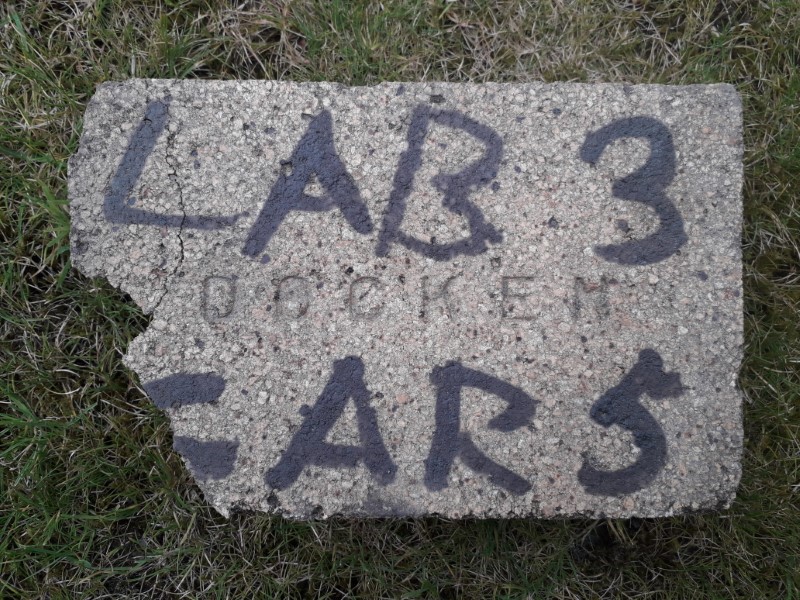