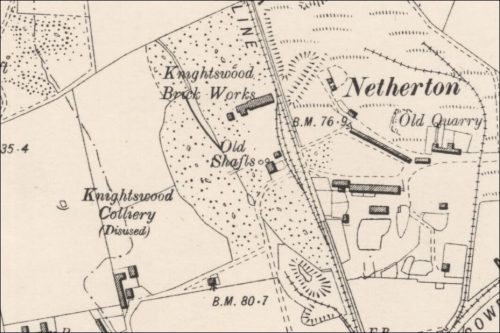 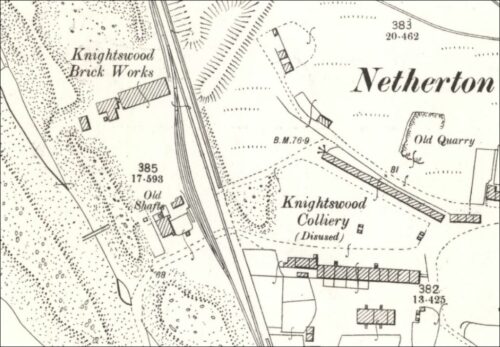 11/02/1898 – Glasgow Herald – North British Railway Company – A special general meeting of the proprietors of the North British Railway was held yesterday in the Queen Street Hall, Edinburgh, for the purpose of considering, and, if thought fit, approving of the following bill about to be introduced into Parliament, namely:-“‘A bill to confer further powers upon the North British Railway Company in connection with their undertaking, to authorise the Burntisland Harbour Commissioners to lease certain of their lands, and for other purposes”. The Marquis of Tweeddale presided … Nos. 3 and 4 were deviations of existing mineral lines at Knightswood and Cowdenhill. These were necessary in order to permit the extension of the brickworks of Knightswood belonging to the Coltness Iron Company, under an arrangement made with them; and, as the Caledonian Railway Company had statutory running powers over the existing lines, provision was made in the bill for the application of such powers to the deviated lines …

21/04/1899 – Glasgow Herald – Foreman wanted for common brickwork, must be a practical man with experience of Hoffman kilns. Apply by letter to Hurll, 144 West Regent Street. (Note – SBH – I am unsure which of Hurll’s common brickwork this refers to so I have recorded this information here to ensure it is not missed).

12/09/1908 – The Scotsman – New company. Peter and Mark Hurll Limited, Glasgow (private company), to purchase and take over the business of brick manufacturers carried on at Glasgow, Garnqueen, Glenboig, Knightswood and Garscadden Works near Glasgow. Capital £50,000 in 25,000 pref shares of £1 each and 25,000 ordinary shares of £1 each. 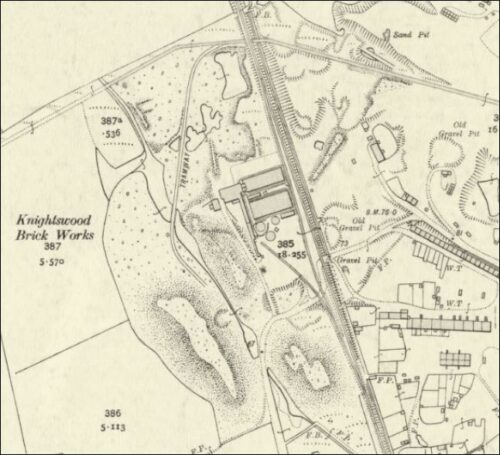 16/07/1909 – Milngavie and Bearsden Herald – Peter McNeil (19), van man, residing at 238 Berkeley Street, Glasgow, John Addison (19), labourer, 1 Alexander Street, Partick, and Duncan Wilson (20), labourer, 35 Gardner Street, Partick, were, on Thursday, 8th inst., charged, before Sheriff Blair, in Dumbarton Sheriff Court, with the theft of a damper pulley and chain for brick kilns, from Knightswood Brickworks, near Temple. Accused denied the charge, but were convicted on evidence, and fined twenty shillings each or seven days.

30/07/1909 – Milngavie and Bearsden Herald – At Dumbarton Sheriff Court, on Tuesday last, John Montgomery, alias Ford (50), vagrant, hailing from the Partick district, was charged with having the previous day stolen from Knightswood Brickworks, near Temple, a back balance and link chain for a furnace there. Accused admitted the offence and being previously convicted, was sent 30 days in prison.

17/11/1911 – Milngavie and Bearsden Herald – John McCluskie, (57), labourer, of no fixed residence, was on Thursday, 9th November, conveyed to Dumbarton and taken before Sheriff Blair, when he emitted a declaration and was committed to prison for enquiry, he having the previous afternoon, it was alleged, broken into the engine-house at Knightswocd Brickworks, where he was found by the workmen with a bag and some plunder ready to carry away, which included stamps and mixing knives.

09/04/1923 – Aberdeen Press and Journal – Raid on Explosives store. Three masked and armed men have raided an explosive store in the Anniesland district Glasgow for blasting operations in an adjacent quarry, getting clear away with a haul of gelignite and detonators. The scene of the occurrence was the Knightswood Brickworks. Two watchmen were on guard, and, choosing a time when these were separated, the raiders held up one with revolvers, enjoining him to keep quiet when would he be all right. They bound his hands and feet and tied him to a seat. The second watchman was then met and held up by one of the masked visitors, while his two companions broke into the store. It is stated that the raiders secured eight pounds weight of explosives, and used bicycles to get away. After their departure, the watchman who was tied up released himself. The alarm was raised, but the men were clear away. The police think the raid is the work of sympathisers with the Irish Republicans.

10/04/1923 – Hartlepool Northern Daily Mail – A Glasgow message says it is thought the quantity of explosives found in a railway tunnel near Kelvinside, Glasgow were a portion of the explosives stolen from the store at Knightswood Brickworks sometime during the weekend. The discovery was made by a workman stumbling over a mound in the tunnel. He found buried beneath the mound, 112 sticks of gelignite and coils of fuse. The place of concealment was a shallow hole between the ends of two sleepers. The authorities are of the opinion that the explosives were placed there temporarily prior to their removal to Ireland for the use of the Republicans. Three men detained in connexion with the raid on Knightswood Brickworks, when two watchmen were held up, were today remanded at Glasgow Police Court.

18/01/1929 – Milngavie and Bearsden Herald – Knighstwood. A man of about 66 years of age who had been asphyxiated by poisonous fumes was discovered in a kiln in the brickworks of Messrs. P and M Hurll at Temple on Friday. Apparently, he had been sleeping in the kiln overnight. The Police were informed and the body was removed to the mortuary at Maryhill Police Office, where it awaits identification. In a pocket of the jacket was found a National Health Insurance card bearing the name of Henry McNaughton, Douglas Street, Partick.

c. 1930 – Kenneth Sanderson states in his book The Scottish Refractory Industry 1830 – 1980 – “Hurll owned building brick works and associated clay pits at Garscube, Maryhill, Knightswood, Yoker and Garscadden, all in the Glasgow area. Garscube made sewage pipes on an early Pullen and Mann machine, using fireclays sent from Glenboig. The British Clayworker Magazine of November 1984 reported the discovery of a blue Staffordshire type of clay in the Carluke area, Lanarkshire, which was also used at Garscube for a period. The Garscube and Knightswood Works had closed by the early 1930s but the Garscadden Works continued until 1948 when it was leased to Keir and Cawder”