There have been marked changes to the Fordhead area over the last century.

In the late 1800s, there was a thriving tileworks at Kippen Station.

The clay from the carse was perfect for making all manner of bricks. They also made tiles for use in roofing and drainage.

The Tile Works closed in 1895. The actual site was on an area of land on the north side of the station. This area is largely untouched to this day and may well have remnants of the tileworks under the thick covering of vegetation.

A more dramatic sign of its existence is in the large field that runs from the Station to the Forth. This field (a part of Fordhead) is where the clay was dug out, and as a consequence is at least a metre lower than the surrounding area at the station end. Source

Below – Unknown date – Believed to be Kippen Tileworks. Note the tile making machine. This machine creates 3 lines of clay land drainage tiles at a time. The man 2nd from right is holding a 3 pronged wooden tile lifter. Once the tiles have been cut with a wire guillotine the 3 tiles will be lifted and taken to the drying shed for pre-drying prior to firing. 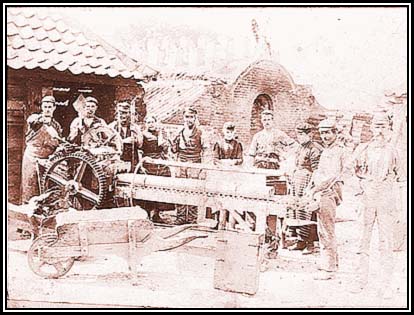 A brick and tilework, affording employment to about a dozen of the villagers, was carried on at Kippen Station till about 1895. The proprietor of Boquhan, Admiral Campbell, who had it in his own hands, gave it up at that date as a non-paying concern.  Source –  The Kingdom of Kippen Its History and Traditions by William Chrystal Page 38

This railway article refers to the Boquhan Brick and Tile Works which had a siding on the upside. It also references the tile works being converted into a sawmill.

08/04/1852 – Stirling Observer – Kerse Farm in the Parish of Gargunnock to be let … which has been to a considerable extent thoroughly drained will be let … Henry Fletcher Campbell, Esquire of Boquhan. 07/04/1852.  (Note – SBH – This infers that the Boquhan tileworks have been in existence for a few years – assuming the tiles were obtained from there!)

05/06/1856 – Stirling Observer – A trip to Balloch on the Forth and Clyde Junction Railway – … the brick and tile works belonging, as we were informed, to Mr Campbell of Boquhan, have been of great advantage to the farmers of the district. The proprietor supplies the drainage tiles etc to those on the estate at prime cost, a small additional percentage being charged to those requiring them on adjoining properties

23/10/1856 – Stirling Observer – The Farm of Ballochlinn on the Estate of Boquhan to let … a large proportion of it has been tile-drained and highly improved … Offers will be received by Henry Fletcher Campbell, Esquire of Boquhan. 15/10/1856.

Below – 19/06/1862 – Stirling Observer – Crawfordstone Farm for sale with reference to the Boquhan Tileworks adjoining it. 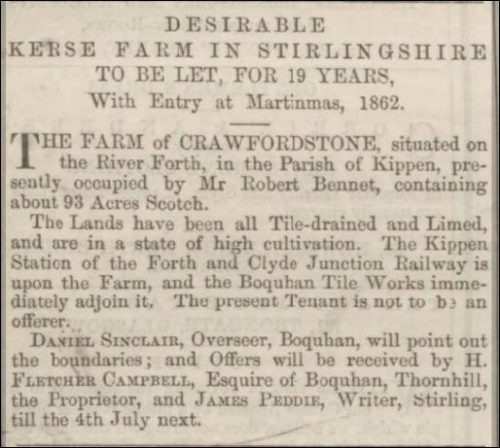 Below –  1865 – Boquhan Tile Works  –  Four buildings (one of them an engine house) are depicted, and a short railway siding linked them to the mainline. 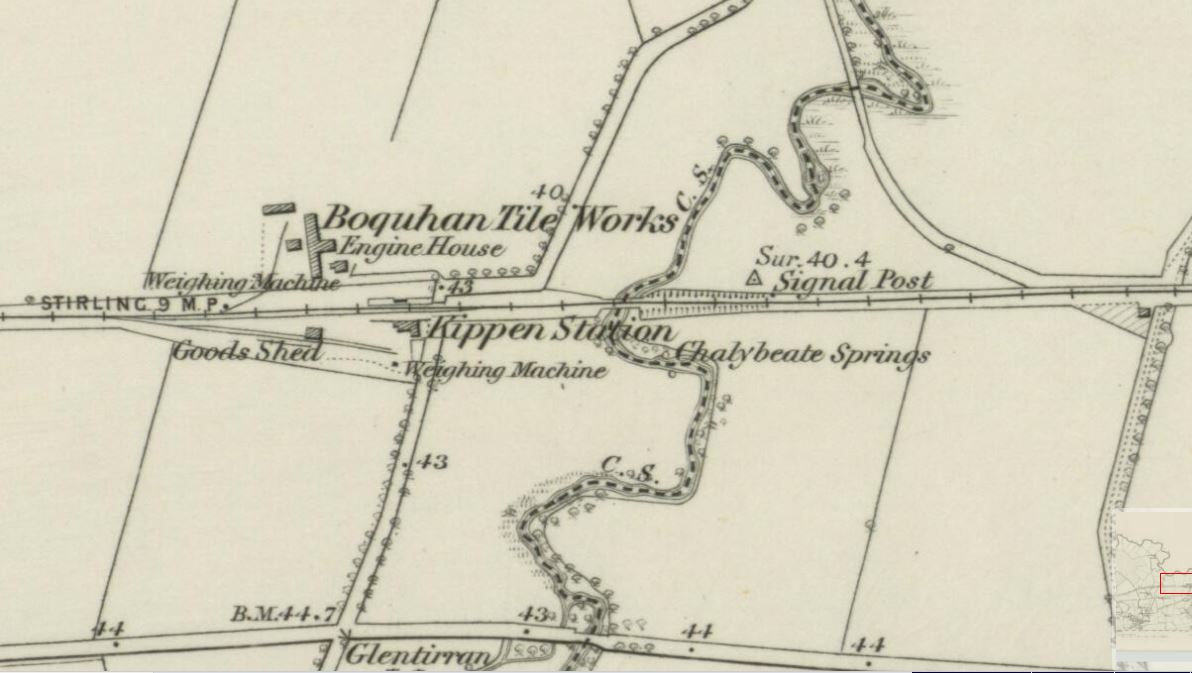 08/02/1869 – The Scotsman – Foreman wanted immediately for the Boquhan Tileworks. He must be thoroughly skilled at making and burning drain tiles and pipes. A married man preferred. Apply stating experience and terms and giving references to Mr J.M.Cunningham, Writer, Stirling. 03/02/1869.

Below – 1899 – Boquhan Tile Works. Note the tram line leading to the clay pit. 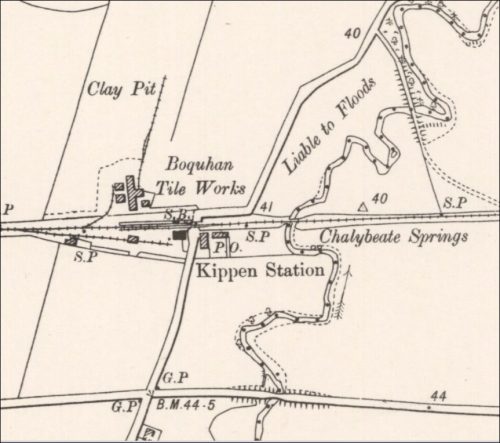 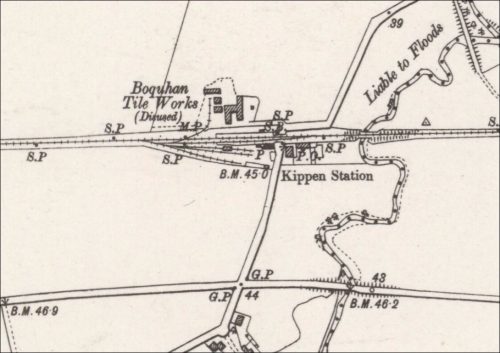 Below – 1948 – Boquhan Tileworks. Disused but the buildings are still shown as standing. 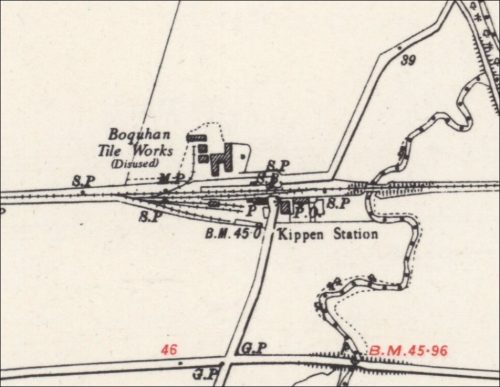