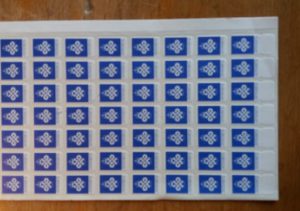 Press announcement – The Queen’s Award for Export Achievement has this year been awarded to GR-Stein Refractories Ltd., a Sheffield based subsidiary of Hepworth Ceramic Holdings PLC.  The company manufactures a wide range of refractory materials for heat-using industries in over 100 countries worldwide.
The award has been made in recognition of the company’s achievement in increasing its export sales by 48% over the two years to June 1986.  Exports, which are in excess of £30 million, now represent nearly half the company total sales.
Notable successes achieved in the last year have been in the supply of refractories for an ironmaking project in South Korea through Davy McKee and for a large blast furnace for China Steel in Taiwan in co-operation with Ishikawajima Harima Heavy Industries of Japan  (I. H. I. ) for whom the order represented the first ever blast furnace lining order placed outside Japan.
Similar successes were achieved in the cement and glass industries.  In particular, the company’s products have been selected by Pilkington Brothers for major float glass projects in Shanghai and Sweden and a direct sale was made to the Chinese cement industry.
For further information contact the Company Secretary, GR – Stein Refractories Ltd.,  Genefax House,  Tapton Park Road,  Sheffield S10 3FO.  Tel.  0742-306577
***********************************************

I am sure that you will be aware by now be aware that the Company have this year bee granted the Queen’s Award for Export Achievement.

The Award is in recognition of the Company’s achievement in increasing its Export Sales by 48% over the teo years to June 1986.  Export Sales now account for nearly half of our total Sales.

The Award is a tribute to the whole Company,  particularly to our Export Sales Staff, whose efforts throughout the world have produced such good results.

The Award itself will be presented to the Company by the Lord Lieutenant of South Yorkshire, at a ceremony to be held in Sheffield on Tuesday,  7th July 1987.  Whilst clearly it will not be possible for all Staff to attend the Award Ceremony,  it is intended that the Award will be displayed at each Works in turn as part of a local celebration.

In the meantime the Board of GR-Stein Refractories Ltd.  have decided to commemorate the occasion with a suitable memento to all employees, and therefore i hope that you will accept this Queen’s Award Tie/Scarf and wear it with pride.

GR-STEIN REFRACTORIES LIMITED
WINNER
THE QUEEN’S AWARD FOR EXPORT ACHIEVEMENT 1987
ABOUT YOUR COMPANY:-
GR-Stein Refractories Limited, with factories in England and Scotland, is one of the world’s largest refractories manufacturers.  Steadily and progressively the record of export sales has been growing until they now represent almost half the total turnover,
Historical Background
The Company is the result of the merger in 1969 of the United Kingdom’s two most famous refractory producers, General refractories of Sheffield and John G. Stein of Bonnybridge, Scotland.
In 1970 the newly-formed GR-Stein Refractories Limited became an important part of a new, larger group,  Hepworth Ceramic Holdings, which is now the United Kingdom’s leading producer of vitrified clay and plastic drainage systems and other construction materials ;
industrial sands, minerals and resins; and refractories.  in 1985 GR-Stein acquired the British Steel Corporation Refractories Group and as a result, a new company has been formed with Hepworth holding 78% and BSC 22% of the equity.  Another member of the Group,  The Hepworth Iron Co. Ltd. is a 1984 winner of the Queen’s Award for Technological Achievement.
PRODUCT RANGE
The Company has seven factories in England and Scotland producing an extensive range of products which include high alumina shapes; firebricks; alumino-silicate and insulating monolithics; basic shapes and monolithics; special ceramics including grinding media,  abrasion-resistant materials and refractories for continuous casting and ladle valve systems;  carbon;  silicon carbide;  silica;  zircon refractories;  hot face insulating bricks and pre-cast shapes from the full monolithic range.
PRODUCT APPLICATIONS
The products, a range in excess of 300,  are used world-wide throughout all the heat-using industries,  especially for all aspects of the iron and Steel, Non-ferrous, Cement and Glass industries.  In addition, the Hydro-carbon/Petrochemical industry requirements are supplied with a variety of products.
MAJOR MARKETS
The Company export to over 125 countries.  Important sales are made to the iron and Steel,  Non-ferrous,  Cement and Glass industries in Europe,  Africa, the Middle East and the Pacific Basin.
Part of the export strength lies in close technical association with the British Steel Corporation and the resolution of problems relating to the latest steel-making methods – similarly with Davy McKee  (Stockton)  Ltd.,
Pilkington Brothers PLC and Blue Circle Industries have been supplied for major export as well as home capital projects.  A particularly notable first was the selection,  in the face of the world-wide competition of GR-Stein’s refractories by IHI of Japan in a new blast furnace lining for China Steel Company in Taiwan.
RESEARCH & DEVELOPMENT
Research & Development receive special emphasis and the Company is acknowledged to have one of the most extensive and well-equipped refractories laboratories in the world.
M.  Dick,
Personnel and Safety Officer
Below – The following items were donated by Harley Marshall, who joined John G Stein at the Castlecary Works in 1949 aged 16 years. He started as an estimator. He thereafter became an Export Manager at the Manuel Works, Whitecross in 1980.
Invitation and menu for the celebration luncheon with regards winning the Queens Award for Export Achievement 1987. 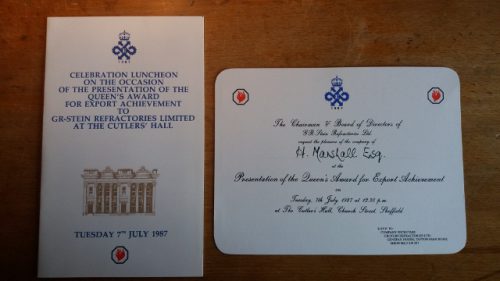 Below – Stickers that the company added to documents highlighting the award win. 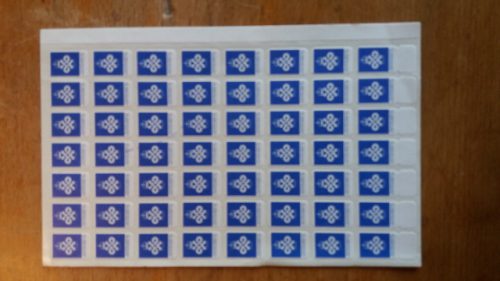