Below – 1858 – Gartnavel (Note – SBH – I have been unable to pinpoint the position of the brickworks but I suspect they were situated somewhere between the Great Western Road and the Gartnavel Asylum). 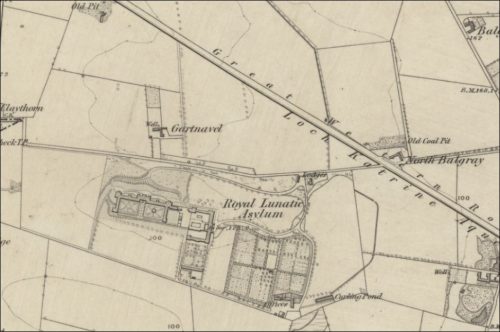 30/12/1861 – Glasgow Herald – Self-contained house in Garnethill for sale by a private bargain. A superior lodging containing dining room, large drawing room, parlour, six bedrooms with kitchen, bathroom handsomely finished. As the proprietor is necessitated to realise immediately this house will be sold cheap and the sum required to be advanced by a purchaser need not exceed £250. Apply to Robert Moyes, 77 Renfield Street.

13/01/1864 – Glasgow Herald – Self-contained lodgings at Elmbank Crescent. Another of these elegant and commodious houses has been sold since the advertisement in Mondays Herald. The remaining three of ten advertised two weeks since are now offered on favourable terms. Apply to the proprietor Robert Moyes, 225 Bath Street or Caswell and Skinner, 22 Gordon Street. (Note – SBH – There are numerous advert relating to Robert Moyes selling or letting houses and shops in Glasgow).

08/04/1870 – Glasgow Evening Post – Victoria Park feuing to builders. The compartment fronting the south, immediately behind Belhaven Terrace, will now be given off at a moderate price, for self-contained lodgings of a different size from the other Terraces in course of building, or about to be commenced, in the Park. Liberal advances made and stones can be had on the ground. Robertson & McCallum. 116 St. Vincent Street; or R & J, Moyes, 223 Hope Street .

07/03/1877 – Glasgow Herald – At Brickfield, Gartnavel, Great Western Road (occupied by Messrs Dick and Hardie), on Saturday 10th March at 12 o’clock noon, public sale under warrant of the Sheriff of 60 x 14 feet planks, pump and connections, bogie, 6 shovels, 2 picks, 3 barrows, about 7 tons triping and 18 tons dross and all effects enumerated in the schedule. Duncan Keith will sell by public auction as above. Sale to commence at 12 o’clock noon. 61 Renfield Street, Glasgow 05/03/1877. (Note – SBH – Renfield Street is a fair distance from Gartnavel).

In 1897, while William Moyes was taking art classes at Glasgow Technical College, he won a bronze medal in the annual National Competition for a ‘design for a hall fireplace’. Starting that same year he also attended the Glasgow School of Art until the 1900 – 1 session, giving his occupation throughout as an architectural draughtsman. He was articled to John Honeyman & Keppie / Honeyman, Keppie & Mackintosh for most of this time, being first paid by them in April 1898.  In 1900, he was among the Glasgow entrants for the ‘National Schools of Science and Art’ art competition, winning a bronze medal.

Moyes remained with Honeyman, Keppie & Mackintosh until 1907, becoming one of its longest-serving draughtsmen. He is now remembered more for his association with Mackintosh than for his own output. When the early Mackintosh scholar Thomas Howarth contacted Moyes in the 1940s, he provided Howarth with valuable information on Mackintosh’s working practices and design input on various larger projects.  Modern accounts of the cultural significance of his later Australian work for the Government Architect’s Department, New South Wales, usually mention his training during Mackintosh’s tenure with the practice.

As well as setting up Mackintosh’s perspective for Scotland Street School, Moyes worked on the design for the Glasgow School of Art, and probably helped with the interiors for Pettigrew & Stephens, Sauchiehall Street.

In 1907 Moyes emigrated to New South Wales, Australia, where he became a draughtsman for the Cootamundra Public Works Department. ‘In a very unassuming way he [was] obliging in the community. He was a diligent worker in the court-house garden’, but left for Sydney in February 1910. Moyes then joined the office of Walter Liberty Vernon (1846 – 1917), who retired as Government Architect of New South Wales in 1911. Moyes ‘would have brought to the office a new enthusiasm about some of the developments in English [sic] architecture and may well have influenced the design of a number of key buildings in and around Sydney. This was a large department designing railway stations, post offices and district hospitals, with numerous fellow Scotsmen, including the next two successors as Government Architects, George McRae (born Edinburgh, 1858–1923), and Gorrie McLeish Blair (1862 – 1939).

While working for the Government’s Public Works Department, Moyes designed an award-winning colonnade as a memorial to the Boer War in Melbourne (1915), and the gate-keeper’s lodge for Long Bay prison complex, south of Sydney (also 1915). During the 1920s, although much of their work is credited to the corporate body, rather than to any particular individual, the Sydney Public Works office was heavily engaged in infrastructure and approach-roads for Sydney Harbour Bridge. Moyes is known to have designed furniture for the University of Sydney’s Agriculture Faculty.

Moyes was living in Engadine, New South Wales when he corresponded with Howarth in 1947. He died there in 1963.