Frankfield Brickworks, Budhill Avenue, Springboig, Glasgow. These works were built in about 1899, probably to make common bricks from colliery waste clays, known as blaes. It had a single coal-fired Hoffmann regenerative kiln, with its tall square-section chimney. On top of the kiln are the damper controls which alter the flow of hot gases through the kiln so that different parts of the kiln can be loaded, fired, and emptied at the same time. In 1966 this works belonged to W & J Whitehead Ltd. In common with many other works of the type it suffered from the end of the post-war boom in the construction of public housing and closed in about 1970. The site has since been cleared. The tenement flats to left of the site are on Budhill Avenue, Springboig, Glasgow, and are still there, having undergone a major refurbishment in the late 80s early 90s. The present site is now occupied with modern private housing. The nearby works belonged to Inshaws, a heavy engineering company

Frankfield bricks were made in Carntyne in Glasgow.  I used to watch them coming out of the kilns.  Closed in the 1970s?  They made traditional Scottish bricks from colliery waste: black shale. – DS 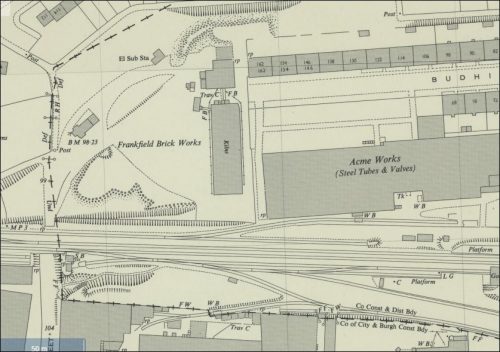 c. 1970 – The 1985 publication ‘A survey of Scottish brickmarks’ suggests the works closed around this time.