Below – 07/07/1820 – Edinburgh Gazette – Creditors meeting being held for the sequestrated estate of William Gardner. 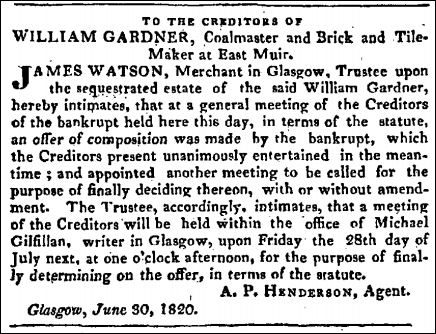 26/09/1828 – Edinburgh Gazette – To the creditors of William Gardner, coal merchant and brick and tile maker, reading at East-Muir. The Lord Ordinary officiating on the bills has this day appointed the creditors of the said William Gardner to meet within the Lyceum Rooms, Nelson Street, Glasgow, on Tuesday the 14th day of October next, at one o’clock afternoon, for the purpose of electing a new trustee, in the room of Mr James Watson, deceased. Chas Fisher, Agent, Edinburgh, September 26, 1828.

Below – 1858 – Eastmuir, Shettleston. The works are not depicted but they must have been situated in this area somewhere. 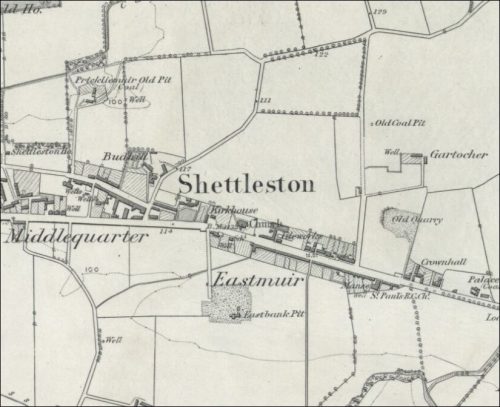 19/02/1863 -Fifeshire Journal – Shocking accident – On Thursday afternoon, a boy named Robert MacFarlane, joiner, Middle Quarter, Shettleston was suddenly deprived of life under the following circumstances:- The deceased and other boys had been amusing themselves at the tilework belonging to Mr John Anderson, tile maker, situated at East Muir, Shettleston close to the turnpike road when, it is supposed, he attempted to pass the horizontal shaft in connection with an engine used for driving a clay mill, then in operation. The result was that the poor boy was drawn underneath the revolving shaft and before the engine could be stopped he head was torn from his body. The tilework, we are informed is not guarded by any gate.