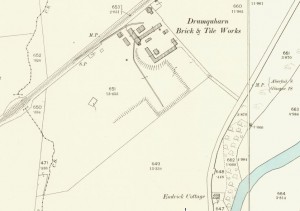 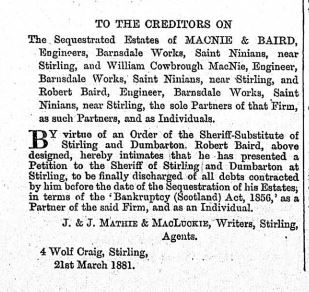 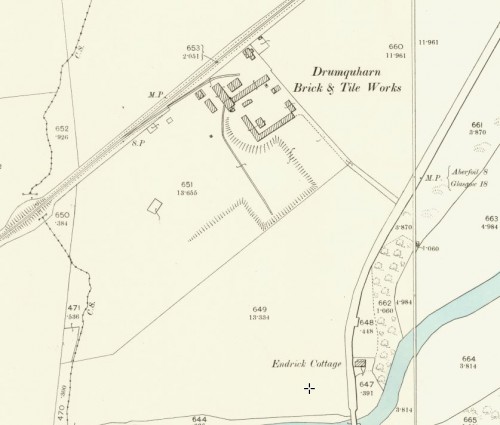 31/05/1899 -Kirkintilloch Herald – Jury trial sitting at Stirling – Before Interim Sheriff-Substitute McNair and a jury at Stirling on Wednesday, John Shaw, commission agent, 26 Aspley Place, Glasgow, was charged with having, between 21st December 1897, and 27th April, 1898, while undischarged bankrupt, obtained credit to the amount of £55 17s 3d from W. C. Macnie & Co., brick and tile manufacturers, Drumquharn Brickworks, Killearn.  He pleaded not guilty and was defended by counsel.  The jury returned a verdict of guilty, and sentence of three months’ imprisonment was passed.

20/06/1899 – Edinburgh Gazette  – A petition having been presented to the Lord Ordinary officiating on the Bills, at the instance of W. O. MacNie & Company, Brick and Tile Manufacturers, Drumquharn Works, Balfron, and Alexander Thomson, Brick and Tile Manufacturer, residing at Drumqnharn, Balfron, the sole Partner of the said Company, as such Partner, and as an Individual, for Sequestration of the Estates of John Shaw, Commission Agent, sometime residing at 26 Apsley Place, Glasgow,  lately residing in Oswald Street, Glasgow, now a prisoner in Her Majesty’s General Prison at Barlinnie, near Glasgow, his Lordship of this date granted warrant for citing the said John Shaw to appear in Court on the seventh day next after citation if within Scotland, and on the twenty-first day next after citation if furth Scotland, to show cause why sequestration should not be awarded; of all which intimation is hereby given. G. R. Stewart, S.S.C., Agent, 42 Queen Street, Edinburgh, 19th June 1899. 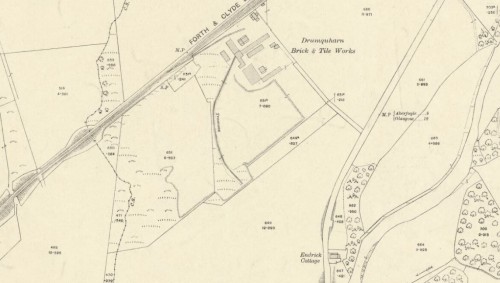 Below – source. – James Gray Seed and Grain Merchant, Stirling 1833-1890 took an interest in a brick and tile works sited at Meikle Drumquharn to exploit the clay deposits there. The farm was part of the Killearn estate and the original lease existed between William Cowbrough MacNie and Peter Blackburn of Killearn House. By the mid-1870s, the tileworks were in debt and James Gray seems to have taken over the ownership of the business, with Mr MacNie in charge of operations while Mr Gray took over the management of the farm. By 1889, James Gray wished to retire from the copartnery that had been formed in 1887 between himself and Alexander Thomson who was at this time running the works. They still traded under the name of William MacNie & Co, Brick and Tile Makers. Alexander Thomson agreed to pay back the money in instalments over a period of 8 years. In 1903 the lease was terminated and the business was finally liquidated after several years of negotiations. –