1778 – Mungo Smith was producing bricks at Drongan Pottery which was situated at Coalhall. The bricks to build cottages on the Dumfries House Estate, called Brick Houses were sourced from the pottery. Source – Matthew Yuill.

1790 – Drongan Pottery was set up and set directly on an excellent clay bed. This clay was used to manufacture drain pipes, flower pots, domestic and dairy products. One reference to the supply of drain tiles is recorded in a contract with the Muirkirk Iron Company in 1790. These tiles made for the supply of water measured 2″ internal diameter at one end and 3″ at the other end with a length of 13″. Most of these early tiles were ‘hand thrown’ on a potters wheel and as a result, they were expensive. Initially, they could not compete with the more common method of draining a field by ditching. – Unknown source.

1832 – Robert and John Boyle were operating the Drongan Pottery in 1832 and they increased production by installing equipment such as a clay mill, boilers and sifters. At this time the pottery output consisted of black and brown ware (table kettles and teapots) chimney cans and garden pots. – Unknown source. 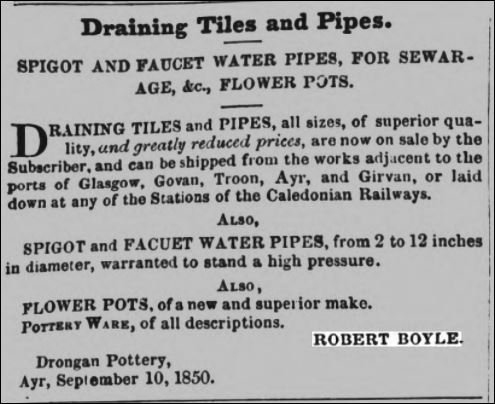 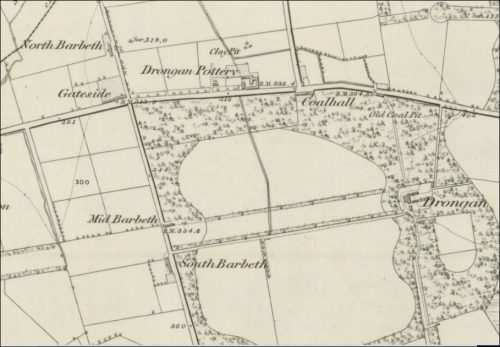 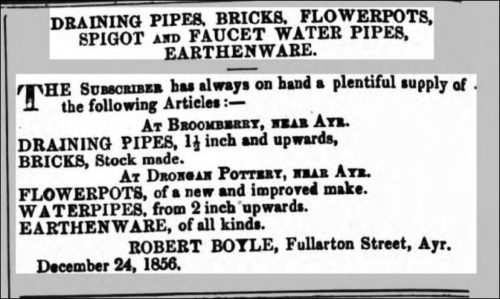