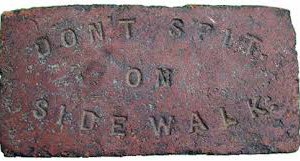 Dr Samuel Crumbine of Dodge City was one of the leading figures in the field of public health in the early 20th century. His health campaigns–including this brick admonishing  “Don’t Spit on Sidewalk”—had wide-reaching consequences.

Born in Pennsylvania in 1862, Crumbine came to Ford County, Kansas, in the 1880s to practice medicine. Beginning in 1904, he served as secretary of the Kansas State Board of Health for 20 years.

Crumbine was concerned about the spread of tuberculosis and other diseases and campaigned for their prevention. He became particularly concerned after observing tuberculosis patients spitting on the floor of a train. Crumbine was especially moved to act after watching one of these patients take a drink from a public drinking cup; he then observed a mother giving her child a drink from the same cup without first rinsing it. 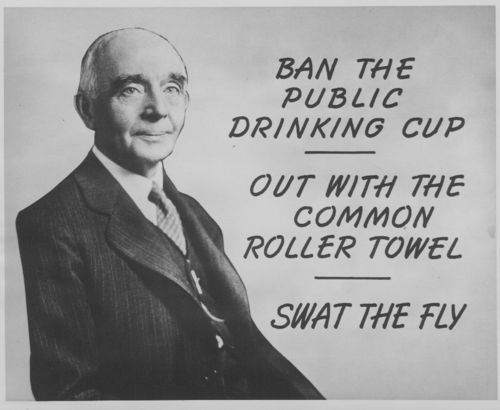 Crumbine’s public health crusade argued for pure food and drugs, elimination of houseflies and rats, water and sewage sanitary control, and the prevention of tuberculosis. He succeeded in abolishing the common drinking cup, the common or “roller” towel, and spitting in public places. Crumbine promoted these campaigns with simple and easy to remember slogans, such as “Bat the Rat” and “Swat the Fly.”

But as he related in his autobiography, Frontier Doctor, one of the slogans came to have a “disdainful” connotation:

It was ‘Don’t Spit on the Sidewalk.’ Many prefer the word expectoration to spit. But the shorter word drove the idea home and a brickmaker in Topeka helped it along by having the phrase engraved on bricks to be laid in the sidewalk.”

Another source suggests the brick manufacturer, probably the Capital City Vitrified Brick and Paving Company, did not really want to stamp the bricks as Crumbine suggested but agreed to stamp every fourth brick with the slogan in order to get the doctor to leave them alone. Other brick makers in the state apparently picked up the slogan, including the Coffeyville Vitrified Brick and Tile Company.

After a long and useful career, Samuel Crumbine died in New York in 1954.

The sidewalk brick pictured on this page is in the collections of the Kansas Museum of History.

Below – Many thanks to Janet and Pat Railsback, Texas, USA for sending me this example. 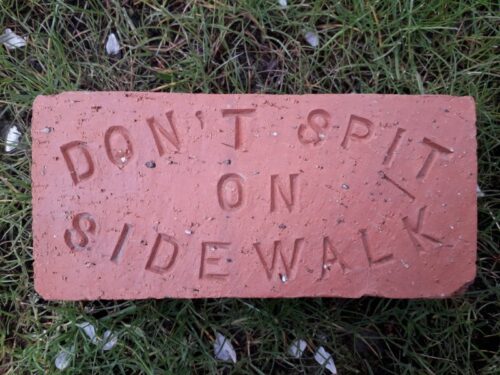