13/08/1881 – Fife Free Press – A new industry. Pathhead is fast becoming a centre for all kinds of industries. We have already floor cloth making, linen manufacturing, mill spinning, engineering, forging, rope making, and still another has been added the many – that of brick making. The enterprising firm of Messrs A. Fraser & Son, builders, who have worked the large quarries on the Dunnikier Estate for the last 25 years, have now commenced to make bricks in the Lower Den of Dunnikier. A kiln has been erected in the vicinity of the old quarry, where bricks are Now to seen making daily. The Messrs Fraser are at present leading the Lothrie Water down to the works, and when this is finished it will save a great amount of labour, as the whole of the water required has to be raised from the Den Burn. The supply from the burn is ample enough for the work, but after calculating the expense and labour of erecting machinery to lift the water, the firm came to the above conclusion. By means of the Lothrie, they will not only have at all times ample supply for the work, but they will be enabled to feed their boilers with the extra pressure. As soon as they have room the works will be extended, when sheds and shelves will be erected, with stoves underneath, where bricks in the winter season will be prepared and dried for the kiln. The bricks, which are made of composition, are of first-class quality, and in every way suitable for building purposes. There is already a demand for them. The material which is required for the making of them is close to the spot on which the kiln is built and we understand that there is as much of it in the neighbourhood of the works as will serve for upwards of 50 years to come. We may add there is material in the Den from which the very finest fire-clay goods can also be made. We wish the Messrs Fraser every success in their new undertaking. 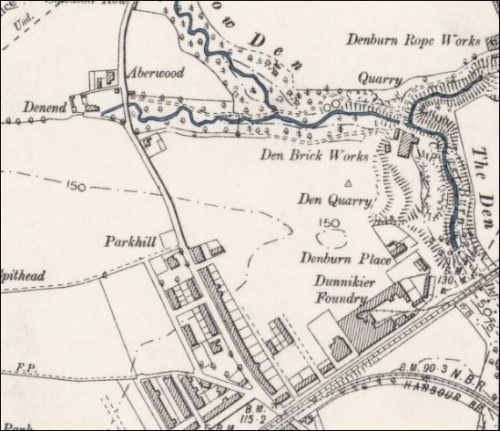 27/05/1899 – Fife Free Press – James Hain, described as a labourer (who does not by any means look as if he laboured), pled guilty to camping out at Den Brickworks and was fined 5s or 3 days in jail. 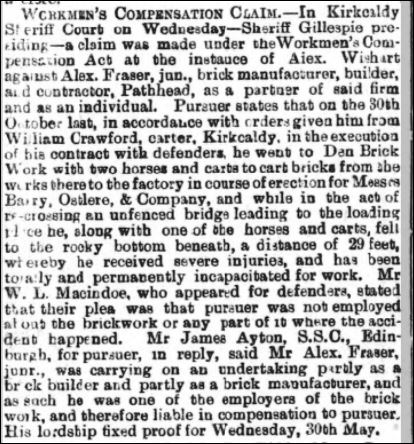 02/06/1900 – Fife Free Press – Workman’s Compensation Claim. In Kirkcaldy Sheriff Court on Wednesday – Sheriff Gillespie presiding – a claim was made under the Workman’s Compensation Act at the instance of Alexander Wishart against Alex. Fraser, jun, brick manufacturer, builder and contractor, Pathhead, a partner of said firm and as an individual. Pursuer states that on the 30th October last, in accordance with orders given him from Wm. Crawford, carter, Kirkcaldy, in the execution of his contract with the defenders, went to Dan Brickwork with two horses and carts to cart bricks from the works there to the factory in course of erection for Messrs Barry, Ostler & Company, and while in the act of re-crossing an unfenced bridge leading to the loading place he, along with one of the horses and carts, fell to the rocky bottom beneath, a distance of 29 feet, whereby he received severe injuries and has been totally and permanently incapacitated for work. Mr W. L. MacIndoe,  who appeared for defenders, stated that their plea was the pursuer was not employed about the brickwork any part of it when the accident happened. Mr James Ayton, S.S.C., Edinburgh, for the pursuer, in reply, said Mr Alex. Fraser, Jun., was carrying on an undertaking partly as a brick builder and partly as a brick manufacturer and as such he was one the employers of the brickwork, and, therefore, liable in compensation to the pursuer. Alex. Fraser, who was the first called, stated that in the brick-making business the partners were his father, his brothers, John and William, and himself. In the building business, he was the sole partner. The two businesses were conducted separately, and he got an invoice and paid the same amount for his bricks as any other builder. The accident happened fully a mile away from the building which he was erecting at the time. It was in his independent business as a builder that he engaged Crawford, as he paid for the bricks at the brickwork, and had to take delivery himself. He did not take any active part in the brick-building business. Mr John Fraser, who was also examined, corroborated his brother’s statement. He had no interest in his brother’s building business. He took charge of the Den Brickworks, and he was not aware of Crawford ever being employed to do their carting. They never delivered the bricks to builders. After hearing the evidence the Sheriff made avizandum.

22/10/1904 – Fife Free Press – Marriage present to Miss Lizzie B Fraser. On Friday evening last deputation the workmen employed at the Den Brickworks waited on Miss Fraser at her father’s house, Denside, for the purpose of presenting her with a testimonial in view of her approaching marriage. The testimonial, which consisted of a handsome silver cake basket, and a silver teapot bearing an appropriate inscription, were handed over to Miss Fraser by Mr John Holland, who, in name of his fellow-workmen, conveyed her their united good wishes for her happiness, and for long life and prosperity in the new relation of life into which she was shortly to enter. They hoped that the sunshine of prosperity and happiness might always surround her and all connected with her. Miss Fraser warmly thanked Mr Holland and all her father’s employees who had subscribed for these beautiful gifts for their kindness, and for their wishes. She intended that these articles should always be cherished among her household goods, and remain among her most prized possessions reminding her, as they always would, of her kind friends at Den Brickworks. The articles presented, which were of chaste design, were selected from the stock Messrs J. A T. Black, jewellers. Last night Miss Fraser was also presented with a handsome reading lamp by the carters connected with the same firm.

29/10/1904 – Fife Free Press – Marriage Supper. On Friday evening the employees of Mr John Fraser, Den Brickworks, were entertained in the National Hotel on the occasion of the marriage of his daughter. In the unavoidable absence of Mr Fraser, Mr D. Bonellie presided. After a most enjoyable repast, served up in Mr and Mrs Barclay’s best style, the toast of the evening was proposed and heartily acknowledged. ‘Our host’ was next proposed, and accorded musical honours. During the evening songs were rendered by several present and much appreciated, and the meeting closed by the company singing Auld Lang Syne.

29/06/1907 – Fifeshire Advertiser – 3 schoolgirls from Dunnikier Place, appeared before Bailie Gray at the Police Court on Saturday charged with maliciously breaking 12 glazed pipes, 1 syphon bend and a quantity of new bricks at the Den Brick Works on 2nd June. They were severely reprimanded.

16/07/1910 – Fifeshire Advertiser – Two women from the neighbourhood of the Den were charged at the Police Court yesterday with having stolen three planks, each about nine feet long, and valued altogether at 4s from Denburn Brickwork. They pleaded not guilty but the evidence led was to the effect that they were seen sawing up the wood and taking it home. The defence was that it was tree branches they were gathering from the burn and the refuse coup, but Bailie Peebles found the charge proven. Remarking that there had been a lot of complaints, he dismissed them on the promise that they would not do it again.

Below – 05/08/1911 – The Scotsman – Fifeshire sale of goodwill of brickmakers and quarry masters plant &c in Kirkcaldy and St Andrews. 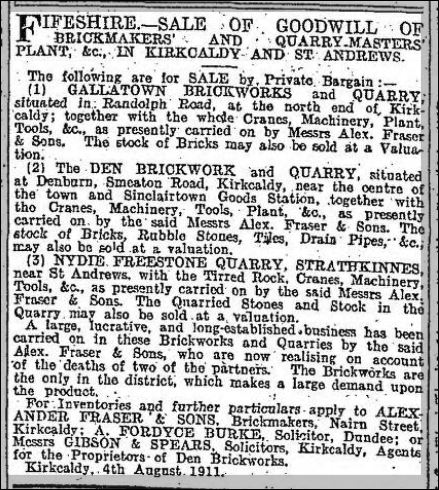 04/11/1911 – Fife Free Press – Den Brickwork and Quarry. George Smith and Sons, builders and contractors, Kirkcaldy, beg to intimate to builders and others that they have leased the above works so long carried on by Alexander Fraser and Sons. G. S & S hope by giving attention to all orders entrusted to them, to merit the confidence of their customers. 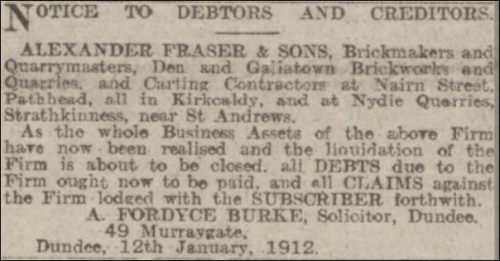 11/05/1912 – Fifeshire Advertiser – Jane Gordon or Watters, wife of Walter Watters, miner, 37 East Street, and Jane Hunter Watters, wife of Archibald Watters, miner, 35 East Smeaton Street, were charged with having on 24th April, from the Den Brickworks stolen a quantity of coal valued at two pence, the property of George Smith & Sons. The accused, two respectable looking young women, pleaded guilty but said they put the coal back. The Fiscal- “lf you lift a thing from the place where it is lying that is theft”. Mrs A. Watters- “A man came and put his hand on my shoulder and told me to put them down, and I put them down”. The Fiscal said they had been watched. The coal was in a bing in front of a kiln. The Bailie – “Was this during the strike?” Mrs A. Watters said yes, it was the time of the strike. They were there with the intention of gathering sticks and not coals. The Bailie dismissed them with an admonition and hoped it would be a lesson them. 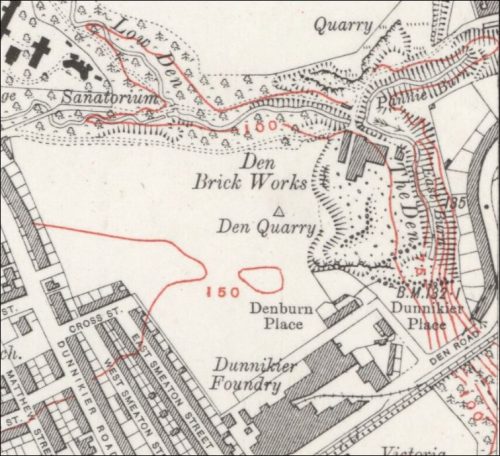 04/01/1913 – Fifeshire Advertiser – On new years day a Linktown labourer named John Currie was helping with repairs at Den Brickworks, when part of a chimney fell and killed him.

Below – 18/06/1919 – The Scotsman – Den Brickworks plant being sold at auction. Messrs George Smith and Sons, builders and contractors are selling due to the termination of their lease. 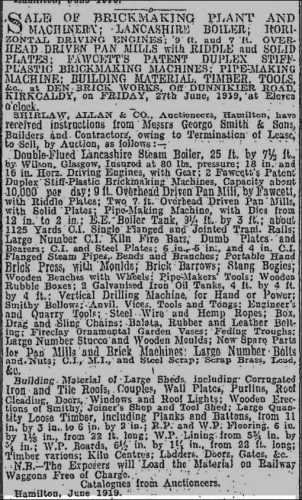 05/07/1919 – Fife Free Press – Sale of brick making plant. On Friday at the Den Brickworks, Kirkcaldy, the whole of brick making plant and machinery belonging to Messrs George Smith & Sons, builders and contractors, was sold by auction, as their lease on the brickworks has now terminated. There was a very large attendance and satisfactory prices were offered with the result that the whole plant along with buildings, materials, iron and tile roofs, ladders, gates, etc were disposed of.

15/03/1930 – Fife Free Press – Reference to the Den Brickworks with regards a new culvert being installed nearby for the Dunniker Den Fever Hospital. 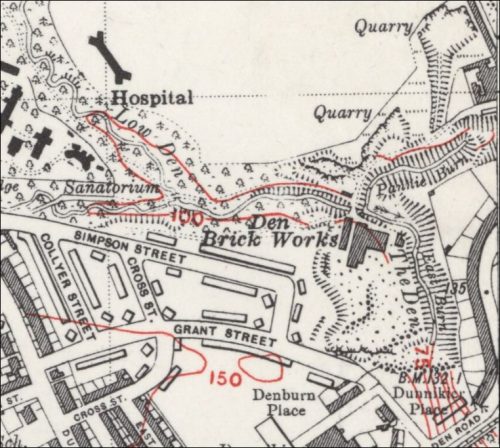