This is very likely a Scottish product but it the manufacturer could be one of several in the Glenboig and Bonnybridge area.

Ron Toothill identifies this as a SULB brick. He states “SULB brick “Semi-Universal Ladle Brick” These would only be used on the working lining only and designed to speed up the bricking of steel ladles. They would be placed end to end onto two specially designed refractory ramps. Two bricklayers would work at 180 deg to each other in the ladle. Because they were radiused, a large number of ever-increasing diameters could be met. Once brick nearly to the at the top of the ladle either a closing refractory brick ramp was used or simply finished off using a refractory concrete to close the ladle top. Steel ladles are good business for refractory manufacturers because they only have short working lives and need replacing often.  We would manufacture the high alumina SULB’s  at GR Stein Manuel works, both as a 3 inch thick brick for the American market and also a 76mm thick SULB for the rest of the world” 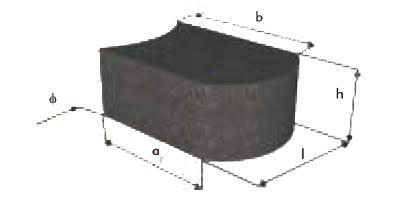