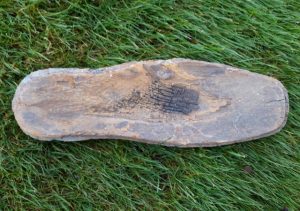 Found in debris at the Armitage Shanks site, Barrhead, Glasgow.

This would probably have been work by one of the employees working within the factory. Clogs were used by many workers working in the various Scottish industries, including brickmaking and associated trades.

A Clogger was a maker of clogs in Scotland. Scottish birch was one of the favoured woods for making clogs.

In 1951 it was recorded that 58% of Scottish clog makers were in Dumfries and Galloway. Almost every village had its clog maker and in the first half of this century, the southwest of Scotland was even exporting clogs to Lancashire. In the late 1940s, the big shoe corporations attracted the clog makers to their factories and with large scale production, the cost of shoes came right down. (Previously the cost of a pair of shoes was more than a week’s wages and cheaper clogs were all that the majority of people could afford.) – Source

The wearing of clogs in Britain became more visible with the Industrial Revolution when industrial workers needed strong, cheap footwear. Men and women wore laced and clasped clogs respectively, the fastening clasps being of engraved brass or more commonly steel. Nailed under the sole at toe and heel were clog irons, called calkers or cokers, generally 3/8″ wide x 1/4″ thick with a groove down the middle to protect the nail heads from wear. The heyday of the clog in Britain was between the 1840s and 1920s

The photos of my clog show clearly the recess where the leather would be stitched or nailed to the sole.  The sole its self has a line of nail holes around the edge where a narrow band of iron would have been fitted. 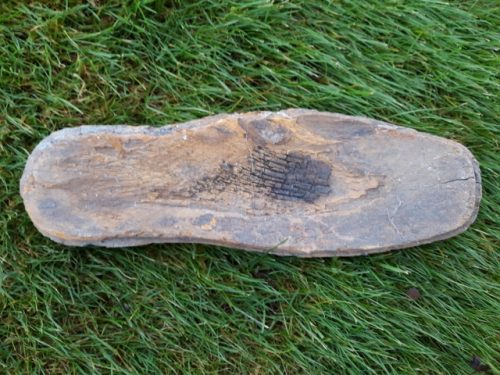 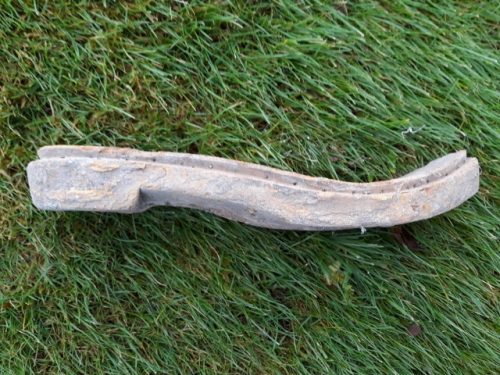