Clepington Brickworks, Dundee. (Note – SBH – Were these brickworks ever built?).

13/09/1884 – Dundee Peoples Journal – New brick and tile works in Dundee – A large piece of ground immediately to the north of the Manhattan Works, and adjoining the East Poorhouse, has been leased from Colonel Sandeman for the erection of brick and tile works. The proprietors of the works will be Messrs Robert Small & Co., coal, lime, and cement merchants and brick and tile manufacturers, who presently have extensive works Pitfour, Glencarse. Plans for the new works, in which a considerable number of persons will be employed, are in course of preparation by Mr Murray Robertson, Architect, Dundee. (Note – SBH – Does anyone know if this was ever built as I can find no evidence of such. The 1910 map shows a skating rink built on the likely site).

15/09/1884 – Perthshire Constitutional & Journal – … Outside the Manhattan Works, there are between 15 and 20 acres of clay about 20 feet deep, and this has just been leased by Messrs Robert Small A Co., Pitfour for a brick and tile work, the bricks already made being of more than average quality …

Below – 06/10/1884 – Dundee Courier – The proposed brickwork near the poorhouse. At a meeting of the works committee of the Poorhouse Committee on the 26th September, Mr Keith stated that the meeting had been called to consider whether the above-named brickwork and kilns proposed to be erected on the west side of the poorhouse were likely to affect the amenity of the poorhouse and to take such steps in regard to the same as may be agreed upon.  The meeting, after consideration, remitted to the Convener to instruct Mr Dickie, the Board’s law agent, to examine the feu disposition of the Poorhouse with the view of ascertaining if there are any restrictions referred to therein in regard to particular subjects proposed to be erected on the ground in question. Various meetings were subsequently held by the Committee about the matter, and the plans of the works before the Police Commissioners were objected to. On another day a deputation visited Messrs Small & Co’s brickworks at Glencarse and Megginch and had been shown the different kilns in operation there. The deputation had also had a conversation with the firm’s manager in regard to the kilns to be erected near the East Poorhouse and had arranged for another conference. Discussion ensued, and the meeting agreed to leave the matter in the hands of the Sub-Committee, who would report their further proceedings before making any final arrangement with the Messr. Small & Co. At the Poorhouse Committee on the 2nd October, a discussion took place on the subject, and it was resolved to leave it in the hands of the Works Committee, who were instructed to report to the Poorhouse Committee before agreeing to any final arrangement.

04/11/1884 – Dundee Advertiser – Appeal regarding a chimney stalk at Clepington. An appeal was presented to their lordships today in regard to the erection of a chimney stalk at Clepington, Dundee. The petitioners are Robert Small & Co, merchants and brick manufacturers, Yeaman Shore, Dundee and Pitfour Works, Glencarse and they bring under review a deliverance of the Police Commissioners of Dundee, acting under the Dundee Police & Improvement Consolidation Act of 1882. They say they entered into an agreement with Mr F. S. Sandeman, manufacturer at Dundee and Stanley to lease for 19 years for the purpose of a brickwork, several acres of vacant ground in the neighbourhood of Manhattan Works at Clepington in the outskirts of Dundee. Under this lease, they have the right to use and work the clay in part of the ground let, for the manufacture of bricks and other similar articles and to erect on another part thereof, kilns with a chimney and other necessary works. The site of the kilns and other erections proposed to be made is on teh high ground at the back of the town, at an elevation of 250 feet above the level of the River Tay and there are no other buildings of any kind between it and the northern parliamentary and municipal boundary of the burgh. On 29th September last they laid before the Police Commissioners, plans and sections of the proposed works, showing a chimney stalk 80 feet in height. The Works Committee without hearing the appellants, on 8th October approved of the plans and sections but subject to the declaration that the chimney stalk should be built to a height of not less than 150 feet above the level of the ground. Against this condition, the appeal is lodged, and the ground on which it is rested are that the declaration is unreasonable and uncalled for and inconsistent with the action of the commissioners in other similar cases; and it is maintained that it ought to be recalled or altered. The appellants state that more than 14 years ago, after a careful examination of the best works of the kind both in England and Scotland, they erected a brickwork on the Estate of Pitfour near Glencarse, Perthshire where they have since had in operation patent kilns of the most perfect description and that, with the works that they propose to erect, it is unreasonable to order that stalk be 150 feet in height. Further, they say that this is inconsistent with the action of the commissioners in other cases because they authorised a chimney stalk of only 57 feet in height to be erected for the Tay Foundry and also one for themselves as Gas Commissioners, making 4 within a small radius, of only 100 feet in height. The appeal was called in the single bills today. Mr H. Johnston for the appellants said he did not know of a similar case before and would propose that the appeal be intimated to the Police Commissioners and the answers be ordered within a certain time. Their Lordships ordered intimation and allowed 8 days for answers …

11/10/1884 – Dundee Peoples Journal – The monthly meeting of the Dundee Parochial Combination was held on Tuesday, Mr MacDonald presiding. The proposed Brickwork is near the East Poorhouse. The Chairman reported that at a meeting of the Committee in charge of this matter, held that day, Mr Collier submitted amended plans of the brick and tile works proposed to be erected near the East Poorhouse. The stalk, which was formerly to be placed within a foot of the Poorhouse wall, was to be removed 300 feet west from the first site suggested, and other amendments had been made on the plans which he was sure would meet with the approval of the Board. Of course, Mr Collier could not give his word that these alterations would be carried out until he saw Colonel Sandeman, the ground superior; but he had no doubt the Colonel would agree to the amended plans. (Applause.)

15/11/1884 – Dundee Advertiser – Counsel were heard today on the petition and answers in regard to the erection of a chimney stalk at Clepington. Robert Small & Co., brick manufacturers, Yeaman Shore, Dundee, had submitted to the Police Commissioners plans of a kiln and other proposed works, and these were approved of on condition that the chimney-stalk should be built to a height 150 feet, instead of 80 feet, proposed Small & Co. An appeal was taken to the Court on the ground that this deliverance was unreasonable and uncalled for and inconsistent with the Commissioner’s actions in other similar cases. Answers were lodged for the Police Commissioners, in which most of the appellant’s statements were disputed and it was maintained that in view of the site and its surroundings there was nothing unreasonable or inconsistent in requiring that the chimney should be 150 feet in height.

09/12/1884 – Dundee Courier – The proposed new kiln at Clepington.  At the meeting of the Works Committee of the Dundee Police Commission, last night amended plans of the new brick kiln proposed to be erected at Dundonald Street, by Messrs Robert Small Co., were submitted. The plans showed, the site of the buildings at a distance of 290 feet from the boundary wall of the East Poorhouse instead of 10 feet before, the chimney, however, being still kept at a height of 80 feet. In consideration of the altered position of the chimney, and also that the plans produced showed improvements, the Committee passed the plans, but only upon the footing that the chimney should be raised 20 feet so to give it an elevation of 100 feet. 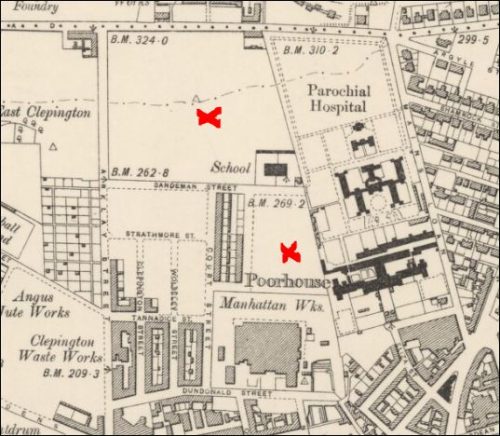