The Calder Fireclay Company was founded in 1880 by Robert Fleming & Co with a brickworks at Armadale. The Company was reconstructed in 1892 as the Calder Fireclay Co and passed into the control of the Paine family who erected a brickworks 2 miles south-east of Airdrie near the Carnbroe Iron Works. They also worked the fireclay and had a brickworks at Hareshaw near Shotts from 1907 to 1919. James Paine joined his father in the business after WW1. Their firebricks, branded Calder, won an excellent reputation for service in blast furnaces.  The Calder works used 9 Newcastle type kilns with about a 50-ton capacity each. They used a large number of hand moulders as a 1925 catalogue claims all firebricks were handmade. This lack of brick manufacturing machines and the smallness of the Company made it difficult to compete in the 1930’s so an agreement was signed with the Bonnybridge Silica Company to merge on 18/01/1936. Calder owned a mineral field of about 30 acres at Chapelhall, 2 miles south-east of Airdrie with easy access to a railway siding. The combined company decided to build modern works on this site. By March 1937 The Bonnybridge and Calder Works were reported at full production and the new Chapelhall Works had started to produce saleable fire bricks.  The original intention to close the Calder Works was postponed. The Calder brand continued after the merger with the Calder Fireclay Company and was used mainly for bricks made at the Chapelhill Works.  Octo and Novo brands were introduced in the 1960s for high alumina bricks. Source Kenneth W Sanderson. 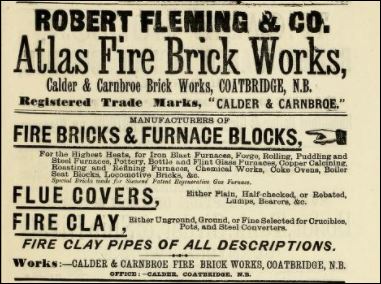 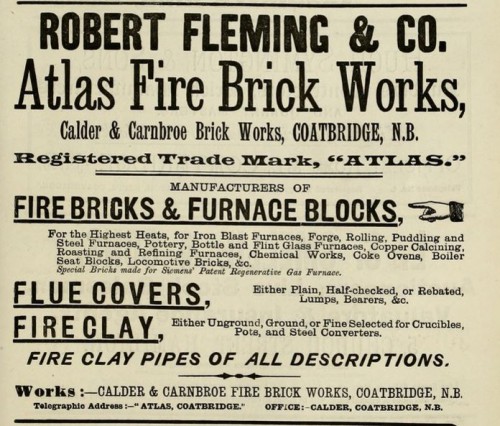 Below – 1897 –  Calder Fireclay Brickworks. (Note: Are the Carnbroe Works shown on the bottom left of the map?) 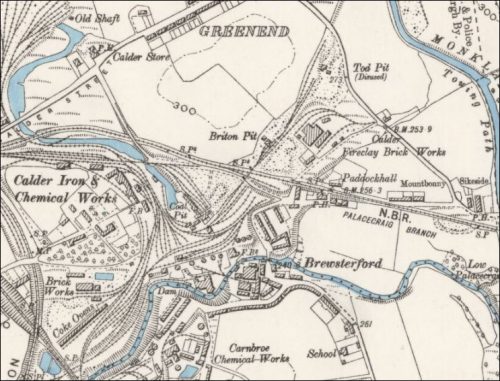 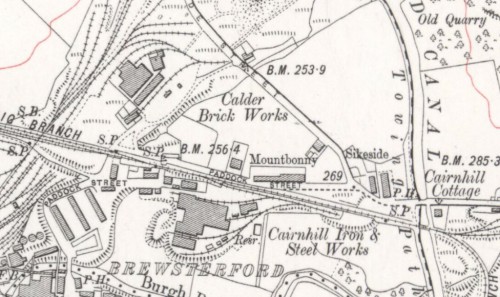 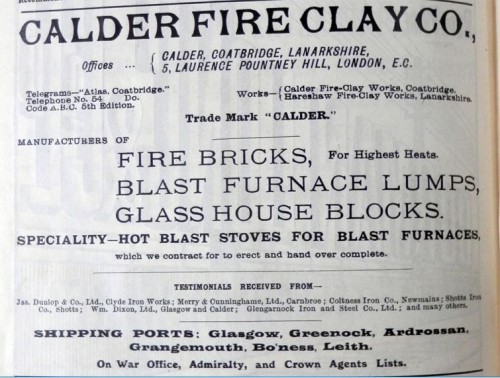 28/06/1919 – Airdrie and Coatbridge Advertiser –  Court case for compensation. Elizabeth McGill or Kelly sued Calder Fireclay Company for compensation. She had been wheeling a barrow up a plank when the plank slid and she fell to the ground striking her back off a steel buffer of a wagon. She was injured and could not work. She was paid a compensatory wage. She was unable to return to work full time so she was offered light forms of work at the Brickworks such as bricking up the kiln doors and cleaning lose bricks on burnt-out kilns. She refused this work and still wished to be compensated. The judge found against her. Full details in the article. 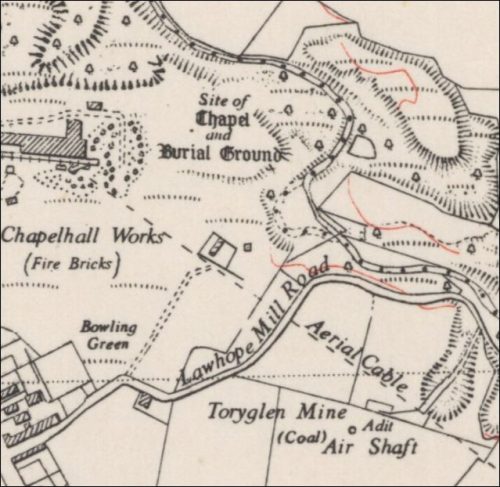 1971 – The 1985 publication ‘A survey of Scottish brickmarks’ suggests the brickworks closed at this time.