Below – 05/09/1840 – Wexford Conservative. A correspondent has sent us the following account of a newly invented rat-trap, which has already been used with marked success. Take a barrel and stretch a skin of parchment over it with a string; cut it across and athwart, nearly to the outside. Take some dripping, and mix it with meal; smear it on the middle of the parchment. The rats will smell it, and treading on the parchment it will give way and they will fall into the water in the barrel. Put a plank for them to creep to the barrel’s brink outside, and strew some oatmeal on it. You must not let the water be too deep, but set a brick endways in it, and the first rat that is caught will make noise, which will entice more, so that they will fight, for possession the brick, and the noise will draw others. Thus in one night, the house may be cleared of rats be they ever many. Mice and other vermin may be caught in a similar manner. 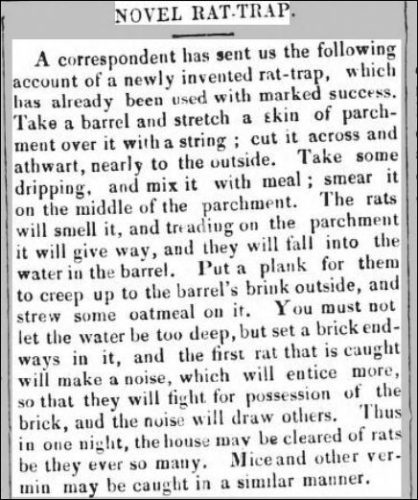 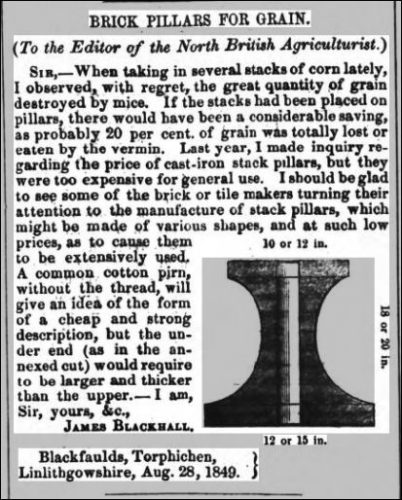 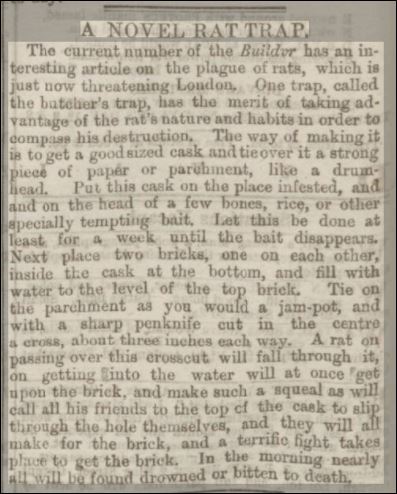 24/05/1876 – North British Agriculturist – Mousetrap. The simplest trap for mice is that used by gardeners. It consists of a common brick, which leans over on a thread supported by two sticks pushed into the ground. On the thread is strung a bean or a pea. In eating the pea the mouse cuts the thread and the brick consequently falls upon the mouse