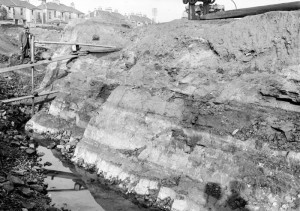 (Note – SBH – I am uncertain from which site the Ayrshire Bauxitic Clay Company Ltd operated from).

Ayrshire Bauxitic Clay Company Ltd – The Parliamentary papers of 1883 record the Doura mine being worked by John Barr, with Thomas Rigg as his manager.  Slater’s Directory of 1889 notes Robert Armour as the proprietor of the Doura Fireclay Company.  The name changed again in 1907 to the Doura Coal and Fireclay Company, but Robert Armour was still the Managing Director.  The surface fireclays in this area are extremely variable, but below them lie the more valuable bauxitic fireclays, which were only recognised for their potential refractoriness after 1912.  in the 1920’s they were worked on an experimental basis by the A.B.C. Syndicate, which compromised the partners, John Shields of Derby, Thomas Kyle of Galston, and Frank Russell of Worksop, who was building up the fast-growing General Refractories of Sheffield.

On 8th May 1930, the partners met at Galston and adopted Articles of Association to form the Ayrshire Bauxitic Clay Company, with a capital of £2,000.  Sir Thomas Cunninghame of Kirktonholm had granted them a lease for 21 years at a fixed rent of £35 a year, or at his optional royalty of 9d per ton of bauxitic clay, 4d for coal, 3d for fireclay, and 6d for sandstone.  These figures show the importance of bauxitic clay.

General Refractories soon took over the management of the company, and sent the bauxitic clay to the nearby rail sidings for transport to Glenboig, while the best of the top fireclay was sent to their other subsidiary, Henry foster.  The remaining top fireclay was sold at 6d per ton to the local Bourtreehill Fireclay company.  This was a very low price as mining costs were 7/2d (36p) per ton in wages, and 1/11d (10p) for timber, rails, and stores.  In 1934, Frank Russell on behalf of General Refractories offered the other partners to build a kiln on the site to calcine the bauxitic clay, subject to a 5% interest charge on the money expended and repayment over ten years.  This was agreed, and to help the company, Frank Russell placed a 100 ton order for the best top fireclay at 7/6d (37p) per ton for delivery to George Turnbull’s Dykehead works at Bonnybridge, which had just been bought by general Refractories; and a further 100 ton order for Henry foster at a special discount of 25% to help them with a cut-price order that they had taken.

R.A. Kilby took over from Frank Russell in 1937 and a second kiln was built.  The state of the mine was causing concern in 1941, and A.R. MacBroom, the Glenboig Mining Agent, recommended that another drift mine be sunk with better pumping facilities and a supply of electricity from the grid.  Labour was scarce due to the war conditions, and two miners were transferred from Castlecary to help.  By October 1942, the new mine was working satisfactorily, and the old mine was closed.  Mining costs had risen to 13/10d (69p) per ton, and as Henry Foster was being supplied at 8/-d (40p), their price was increased to 14/-d (70p) per ton

Due to the shortage of miners, it was decided to experiment and open-cast an acre which was expected to yield about 5,000 tons of bauxitic clay.  The contract was given to the Clydesdale Construction Company, and when the operation was judged a success, another six acres at Muirhead of Balgray was leased for open-casting.  In December 1950, the Glenboig Union Fireclay Company took over the whole company on payment of £2,500 and the Company was liquidated. Source The Scottish Refractory Industry 1830 – 1980

Ayrshire Bauxitic Clay Company Limited.  –  (Members’ Voluntary Winding-up.) At an Extraordinary General Meeting of the above named Company, duly convened and held on the 22nd January, 1951, the following Special Resolution was duly passed: — “That it is desirable to amalgamate the Company with the Glenboig Union Fire Clay Company Limited, and accordingly that the Company be wound up voluntarily and that Douglas Clark Ford, Chartered Accountant, of Star Works, Glenboig be and is hereby appointed Liquidator for the purpose of such winding-up.”  A. McKendrick, Director.

Associated Info  – Glebe Quarry, Saltcoats. Ayrshire. Small-scale quarrying of the Ayrshire Bauxitic Clay. The clay occurs at the top of Millstone Grit (Carboniferous age) lavas. The quarry face extends about 100 yards and further north-east the seam could be traced in the sides of the railway-cutting between the Caledonian Station and the Raise Road. A small mine occurred in a field corner at the northern end of the Raise Road. The seam has been traced from Saltcoats to near Kilmarnock, a distance of almost 15 miles and is by no means homogeneous. It is made up of a series of lenticular patches of different materials which have no great lateral extent and are of widely varying composition. 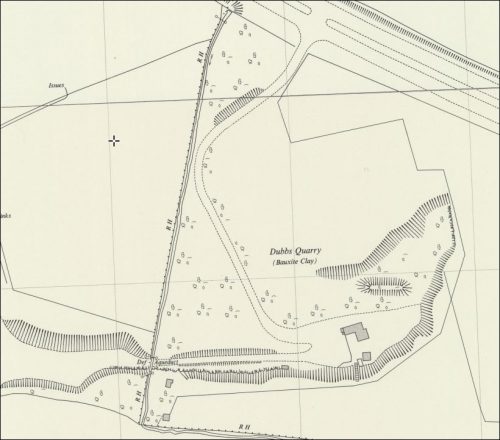