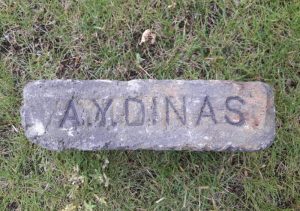 The following stretcher stamped silica brick was found in debris on the site of the old Ravenscraig Steelworks, Motherwell.

Dinas brick – a refractory silica brick made from an impure sandstone containing lime and clay and formerly used in furnace crowns.

Mike Stokes – The brickworks of West Wales – Alexander Young’s Brickworks worked from 1900 to c.1927. In 1877 Alexander Young built a bank of lime kilns at Penymynydd Farm, Four Roads. These stood adjacent to Young’s standard gauge railway, presumably built at the same time as the kilns, which ran to a junction with the GVR at Mynydd-y-Garreg. The bank of kilns was said to be massive, being 120ft wide and 60ft high. A 0-4-0ST locomotive by the name of ‘Duxbury’ worked the line c1905. In 1900 Alexander Young built a silica brickworks on land near Graig, north of Mynydd-y-Garreg. Alexander Young died in c1903-04 and the business was carried on by William Young, possibly his son, trading as ‘A Y Dinas Silica Brick & Lime Co’. By 1917 there were plans to enlarge the works from four kilns to six with additional machinery and to be powered by a stationary gas engine which would replace an old steam engine. Bricks used in the construction came from Trimsaran and Hancocks(?) brickworks as their own silica bricks were not suitable for general construction works as they deteriorate quickly in wet weather. At the same time as the extension was built a new siding was laid on Young’s railway alongside the works. An inclined narrow gauge tramway was also installed in the winter of 1917, but because of operating difficulties, this was probably not used much. By 1922 the works were said to be in the hands of the ‘Amalgamated Dinas Silica Brick Co Ltd’. The works probably closed in 1921 but were kept intact with the hope of re-opening. The company was wound up in 1927 and most of the equipment was sold. Some buildings may have remained up to the time of WW2.

01/02/1908 – The Scotsman –  A.Y Dinas, Brick and Lime Company, 118 Queen Street, Glasgow to carry on business as merchants, manufacturers and dealers in silica, brick, lime &c. Capital £20,000 in shares of £1 each. The public are not invited to subscribe for shares. (Notes – SBH – So what was the Scottish connection. Why was the company registered in Scotland when the bricks were manufactured in Wales?)

Below – 28/03/1927 – Western Mail – AY Dinas Silica Brick and Lime Co Ltd in liquidation. For sale, the quarries belonging to the above company situated at Kidwelly, Wales of silica, stone, silica sand, limestone, ganister, cement and road metal, together with the kilns and the whole brickmaking plant and machinery. For further particulars apply to Thomason McLintock and Co, CA, 216 West George Street, Glasgow with whom offers must be lodged on or before Thursday, 31st March 1927. The highest or any offer may not be accepted. 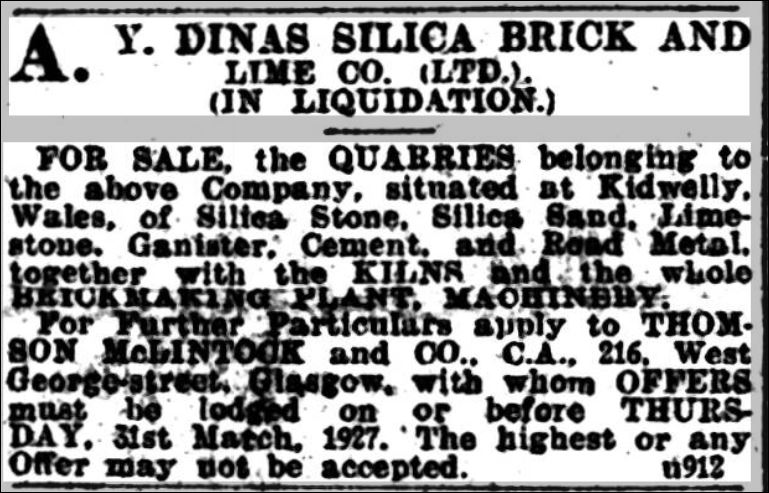 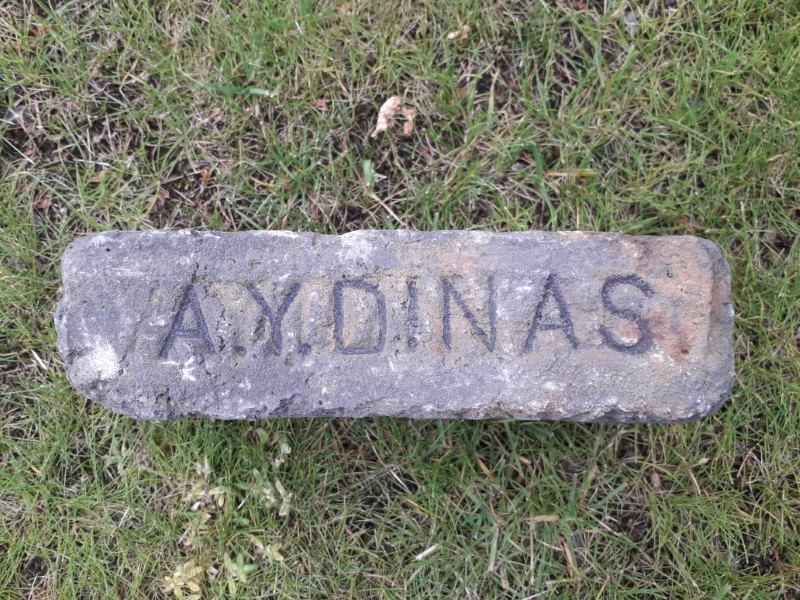