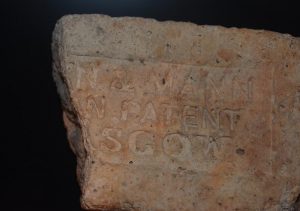 This brick was photographed by Brian Thomas at the National Maritime Museum in Galle, Sri Lanka. 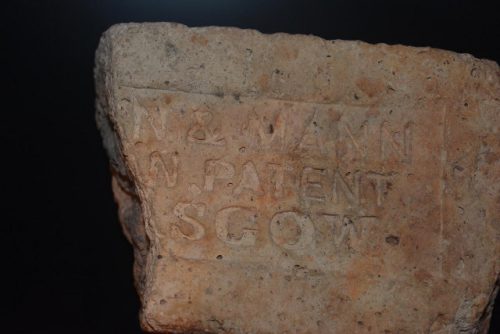 Additional information – Patrick Pugh also photographed this brick while in situ at the Maritime Archaeological Museum in Galle, Sri Lanka.

The Museum includes video footage and extensive seabed finds from a Dutch wreck, the Avondster, which sank in Galle harbour in 1659. The wreck was discovered in 1993 and dived upon by an archaeological team between 1996 and 1999.

A whole section of the museum is dedicated to artefacts recovered from the wreck that lies 7m below the surface and 50m offshore. The brick batt is described by the museum as a “Rare type of a brick with some words embossed. Found from Avondster shipwreck and not known the utility of decorate brick”

Allan and Mann manufactured bricks during the 19th century so as Patrick points out, the Allan and Mann brick fragment is clearly not from the wreck of the Avondster, given the dates detailed.

More info on the wreck. Dutch bricks were found on board.

Tagged with: Allan and Mann, Manufactured in Scotland and branded for National and Overseas Customers, Ship Wreck, Sri Lanka