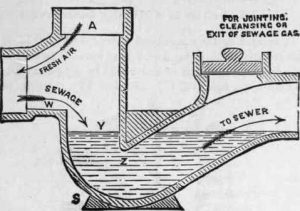 A Buchan Trap (alternative names: Bristol interceptor, interceptor trap and disconnecting trap) is a device made from fireclay located in a domestic sewer pipe to prevent vermin from entering the pipe. The trap uses a water seal to prevent rats and mice from climbing any further along the pipe. Waste flows from the house through a U-bend in the trap. This means that there is always water in the pipe preventing the passage of anything from the other direction. The device is a large clay U-bend with air-inlets and vents at the top. It is located below the ground level but can be accessed through the air-inlet and a rodding hole. This hole allows drain rods to unblock anything located at the bottom of the U-bend.

The Buchan trap will collect solids, sludge and waste that is not in suspension and, over time, can clog up. The overflow will back up the pipe and exit from the lowest connected appliance (sink, bath, dishwasher, washing machine, etc.). This can be a significant problem in multi-level dwellings (e.g. tenements) where those at the lowest level will receive all the wastewaters from those above. They should be checked, and cleaned if required, on a regular basis (say annually).

Traps of this type are widely believed by plumbers to stop the entry of rats but rats are good swimmers and can easily pass through the short flooded section of the trap. The purpose of these traps (as this article says) was to help prevent sewer air from entering houses – foul air was thought by the Victorians to be the source of disease

The Buchan trap was devised in the 19th century to stop the flow of sewer gases also known as miasmas. It was believed that the disease cholera was an air born infection, not water born. The Buchan trap is normally found in the bottom of manholes or drop-shafts. It normally denotes the endpoint of the domestic property’s sewer before it joins the main public sewer. 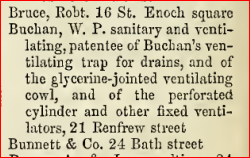 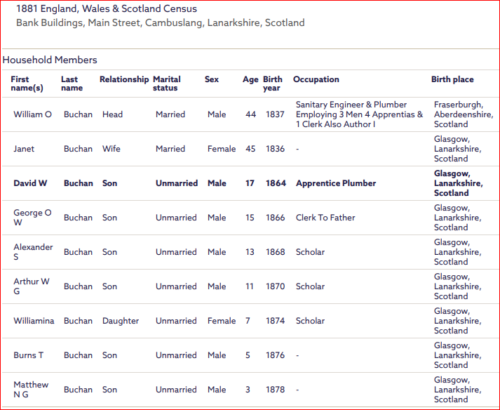 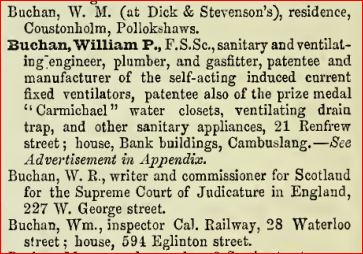 23/07/1881 – Report on the Medical and Sanitary Exhibition held near the Albert Hall. 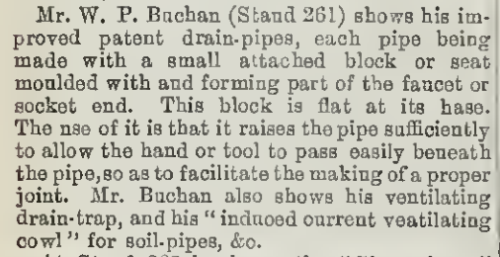 1884 – 1885-. Buchan’s patent sanitary appliances, drain traps, access pipes, roof and ship ventilators and water closets.  The best in the market, and in large and increasing use. They received two first-class awards and one award of merit at the International Medical and Sanitary Exhibition, London, 1881, and the only first-class awards with medals in the sanitary section of the Philosophical Society’s Exhibition, Glasgow,1880; also first-class medal and two certificates of merit at the 1883 Glasgow Congress of the Sanitary Institute of Great Britain. Buchan’s traps and ventilators are in use at Balmoral Castle, the Highland residence of Her Majesty the Queen.  Buchan’s induced current fixed ventilator excelled all the other leading makers’ cowls and ventilators by 94,000 feet in 21 hours testing match at London. For houses, halls, churches, ships, &c. illustrated price lists and testimonials free from    W. P. Buchan, M.S.A., F.R.S.S.A., Sanitary Engineer, 21 Renfrew St., Glasgow. No. 1002. P. Trap Stylo. ‘ Carmichael ‘ Closet. (Simple and Efficient.) 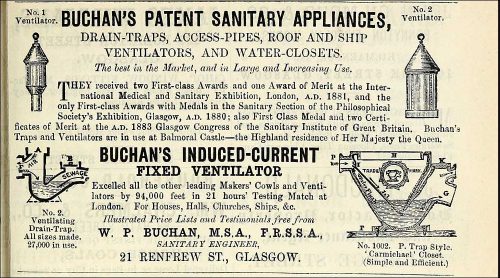 Below – 22/09/1885 – W.P Buchan – Patent no 326,713 – Siphon Water Trap – Be it known that I, William Paton Buchan, a citizen of the United Kingdom of Great Britain and Ireland, residing at Glasgow, in the county of Lanark, Scotland, have invented Improvements in Siphon Water- Traps, (for which I have received Letters Patent in Great Britain, bearing date the 23d day of April 1875, No. 1,4995) and I do hereby declare that the following is a full, clear and exact description of the invention, which will enable others skilled in the manufacture to which it appertains to make and use the same.

This invention has reference to improvements in siphon water-traps used in trapping the water-closet soil-pipes and the waste-water pipes leading or dipping into the drains of houses or other buildings, and which traps are also to be used on the drains themselves, and in conjunction with or on main or side sewers; and the objects of the improvements are, first, to construct Ventilating and disconnecting Siphon-traps with a perpendicular or square drop at the exit from the branch connected to the soil or wastewater pipe or drain to cause in .use a sinking action on the soil floating in the house side of the trap, whereby it is carried away more quickly than with traps otherwise constructed, and, second, through the formation of the trap to more easily and thoroughly ventilate the soil, wastewater, and drain pipes and sewers, and the better to prevent the formation, accumulation, or concentration of foul air or gases in them … 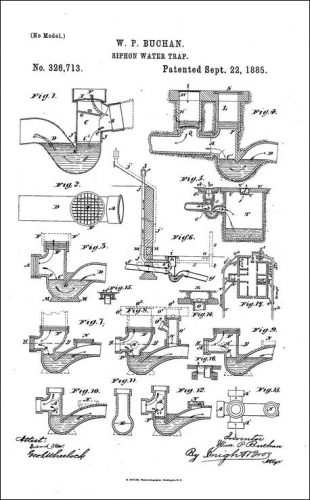 1891 – Ventilation. A textbook on the practice of the art of ventilating buildings with a supplementary chapter upon air testing. William Paton Buchan, RP.