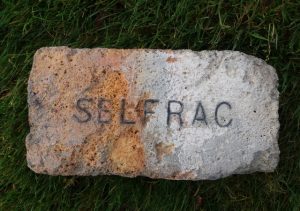 Selfrac is a GR- Stein  Refractories Trademark. (Note – SBH – However, it appears these insulating bricks were made in England, however, I have also been informed by 3 ex-employees of the Manuel Works at Whitecross that they definitely manufactured Selfrac there. As there is some debate here I will leave SELFRAC on the list of Scottish brickmarks meantime, while bearing it in mind that they may well have been made in England).

This is a very light porous insulation brick.

See these entries on invoices rescued from the Stein Manuel Works, Whitecross. 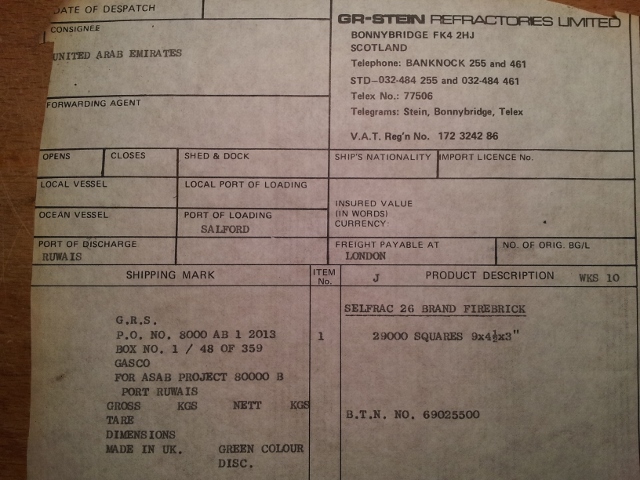 It appears that Allen may have used the SELFRAC trademark first and perhaps it was unregistered as according to this Hepworth registered the trademark in 1962 – https://trademarks.ipo.gov.uk/…/Results/1/UK00000841075 but this link suggests it was registered by GR Stein in 1972 – https://www.quickcompany.in/trademarks/281745-selfrac … all very confusing – to me anyway!

Ron Young – Hi, I worked for GR Stein for about 15 years from 1965 to 1980, spending a couple of them as a lab technician at Allens in the mid/late 1970s. At that time they were manufacturing the Selfrac range of insulating bricks and in the last 3 to 6 months were developing a product based on clay and sawdust as opposed to the clay, expanded polystyrene and sawdust products we’d manufactured before. In both cases, however, the bricks were dried in some of the numerous large sheds that the video, then set in the kiln and fired with an oil burner. Firing was “interesting” to say the least as, up to about (if I remember correctly) 300 degrees the kiln fireman had to keep the kiln burner pumping heat in, but above this temperature, the sawdust and polystyrene “struck” and caught fire and it was then the fireman’s job to shut off the burners and control the temperature using dampers. After firing and cooling the bricks were ground to their final shape and size before being packed and despatched. If my memory serves me correctly we made three grades of Selfrac:- 23, 26 and 28. These being the service temperatures in hundreds of degrees Fahrenheit 2300, 2600 and 2800).

05/10/2016 – The following information from ex-employees at the Manuel Works I once again believe that this SELFRAC insulating brick was made there,  certainly from 1990 to 2001. Two ex-employees remember making them from clay and polystyrene balls. The balls melt away in the furnace to leave the light insulating blocks. They also recall that the original method of production used sawdust as opposed to polystyrene balls or pellets.

These bricks were the sandwich filling between the fire brick and the metal lining of the furnace etc. They were designed to keep the metal cool and keep the heat in the furnace.

Update  – 11/01/2016 – Many thanks to John Bramall for this information. He worked for  GR-S 1972 (Research Labs, Worksop) and then in 1975- 1983 in their commercial/sales/contracts section (Sheffield HQ) was probably the high point of BSC – the main customer. The steel closures started around 1980 following the steel industry strike. He also worked for Dyson Refractories (1964-1969 summer holiday production jobs, and 1969/70 (production) and 1974/75 (Quality assurance) – all Stannington, Sheffield works.

However, John informs me that Selfrac bricks were made by GR-Stein Refractories (previously General Refractories) at their Hipperholme, Halifax works which if this was the sole place of production scuppers my thoughts on Selfrac being a Scottish made product.  They were insulating bricks and were available in 3 grades – Selfrac 23, 26 and 28. Insulating firebrick –  Selfrac 23 – Hot face insulating brick. ASTM C155 Group 23. 1260c

Below – A Selfrac Plus insulation brick found in the Glasgow area by Michael Fallone. 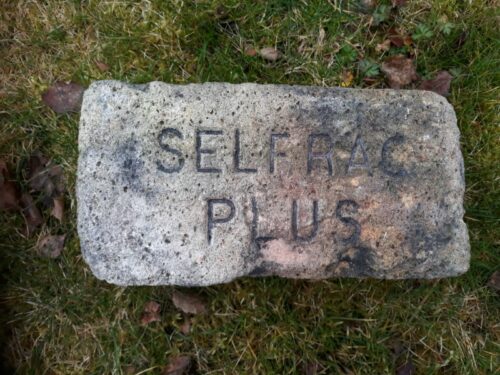