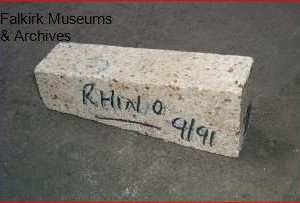 This example is not in my possession but picture reproduced by kind permission of FMA.

GR-Stein Refractories Ltd – Formed by merger in 1970 of John G Stein & Co and General Refractories of Sheffield. GR-Stein became a subsidiary of Hepworth Ceramic Holdings Ltd General Refractories was formed in 1929. It acquired the Glenboig Union Fireclay Co in 1936, (along with other companies), which became its Scottish holding company, and Dykewood Gannister & Fireclay Co of Bonnybridge , George Turnbull & Co of Bonnybridge and Castlecary Brick & Fireclay Co, all in 1936. GR Stein’s Manuel Brickworks in Whitecross opened in 1928 and closed on 28 December 2001 when manufacture moved to England and Poland.

Mark Buchannan who  is a former employee at the Stein Manuel Works states he does not believe the word Rhino has anything to do with any Stein related product and has been written on the brick for no known reason.  Any brick markings would have been stenciled on.

He adds that the brick could be a SILL 66 or SILL 63D –  the blue chalk ring on the top face would be highlighted to show the kiln dropping(what it looks like to me). The dot on the end face would be a sizing mark possibly green. The colour coding was so when the bricks ran through the size banding machine all the relevant bricks in that band were colour coded accordingly, the chequer bricks were also done this way . This brick could have been cut in half looking for any lamination inside the brick.

Kiln dropping is when the roof of the kiln starts to degrade due to continuous high temperature firing which causes part of the roof to melt and then drop on to the bricks being fired. 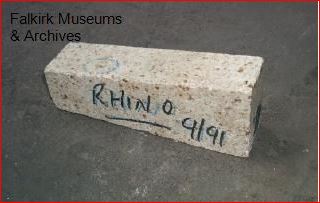 Could Rhino have been an employees nickname?