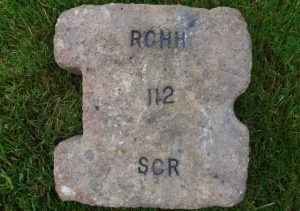 Unidentified maker but find location would suggest Scottish origins but…

This example was found cemented together with RCHH 110 SCR

Harry Baird used to work at the Manuel Works, Linlithgow. He gives an explanation as to what this brickmark could represent and he is certain it is indeed a Stein stamp. 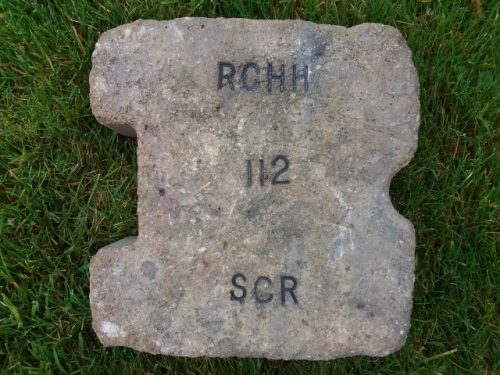 However John Bramall’s thoughts are as follows:-

RC – customer code – in this case Ravenscraig but could be many other 2-letter combinations
HH – Hoogovens design of Hot Blast Stove
112 – brick shape or position mark in the construction design
SCR – Sillmax SCR – SCR means Super Creep Resistant
Between 1975 and 1983 when I worked at GR-Stein and was involved in the Ravenscraig Hot Blast Stove rebuilds using the Hoogovens internal combustion design, the SCR product got its super creep resistance by being fired twice through one of the basic brick tunnel kilns at Manuel Works.
I think that Stein 73D bricks used a similar twice-fired process during their manufacture.
The basic brick kiln schedules were of higher temperatures than those of the High Alumina and Firebrick plants.
Sillmax 66 was not manufactured at that time.  After basic brick production was moved from Manuel Works to Worksop Works I suppose the Manuel made bricks would be fired twice through the Manuel Works High Alumina kilns, perhaps to a higher firing schedule. Maybe this brick was then named Sillmax 66?
The SCR product was a GR-Stein product as Sillmax was a General Refractories Group brand that after the merger with John G Stein was manufactured by GR-S at Manuel Works.
Tagged with: John Gilchrist Stein