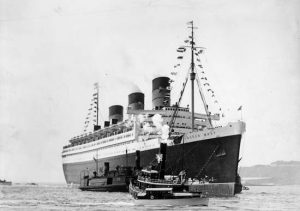 Below – 16/02/1935 – Airdrie and Coatbridge Advertiser – We are glad to learn that Messrs John Brown and Company, Limited, have just placed with the Glenboig Union Fireclay Company, Limited, the important order for all the high-temperature fire bricks for the boilers of the SS Queen Mary.  The order was secured in face of keen competition and pays a tribute to the high qualities of the Glenboig fire brick. The Glenboig Company were favoured with an almost identical order for the SS Empress of Britain, and no doubt the excellent performance of the fire bricks in that gigantic boat influenced to some extent the placing of this recent repeat order. 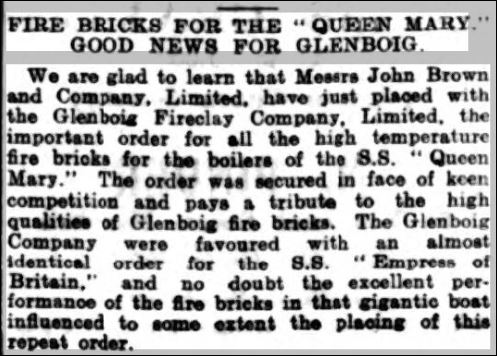 30/08/1935 – The Scotsman – Installing the machinery – One of the greatest feats achieved during the past 11 months has been the installation of the main machinery and auxiliary equipment, which occupy a space in the vessel equal in length to some of the largest Atlantic liners.  At the present time, scores of workmen are busily engaged in the highly important task of bringing the giant turbines,  gearing, and propelling shafting into perfect alignment,  This is essential to ensure the perfect running of the great engines.  So delicate is the task that the machinery has to be adjusted to the thousandth part of an inch, and the work has to be accomplished by hand.  Work is also proceeding apace in the five spacious boiler rooms, where the 27 enormous boilers are being partially lined with specially made bricks.  Thousands of bricks, approximately nine inches square and bearing the Scottish name “Glenboig,” are being bolted by hand to the inside of the boilers.

07/11/1935 – The Scotsman – Glenboig Union Fireclay Company. – Presiding at the 53rd annual general meeting of shareholders in Glasgow yesterday, Mr Robert Henderson, chairman of directors, remarked that the directors had more pleasure in presenting the accounts this year than they had for some time back.  A material advance on past years had been made in the period under review, and the outlook was much more hopeful.  Shareholders might be disappointed that though sufficient had been earned to pay some dividend, the directors had not done so.  The directors had thought it advisable, in the interests of the Company, to transfer £5000 towards plant improvement, and to carry forward a sum of £2335.  A revival in the home trade was experienced during the past year, and a sure index of their improvement was the progress of the iron and steel trades.  Foreign business, on the other hand, had been very difficult, but on the whole, he thought he could speak more hopefully at the moment than at any time during the past three years.  Mr Henderson mentioned that the Queen Mary, now being completed at Clydebank, had been fitted out with bricks made at Glenboig.  The report and accounts were approved.

Below – June 1936 – The Shipbuilder and Marine Engine – Builder Magazine. ‘Queen Mary’ boiler furnaces are lined with Glenboig Firebricks. Used also for the furnaces of the ‘Empress of Britain’….supplied regularly to the British Admiralty…..specified for use in annealing and welding furnaces, steel furnaces and regenerators, soaking pits and reheating furnaces, mill furnaces and cupolas, producer linings, gas works etc and in fact for any place where really first-class firebricks are required. 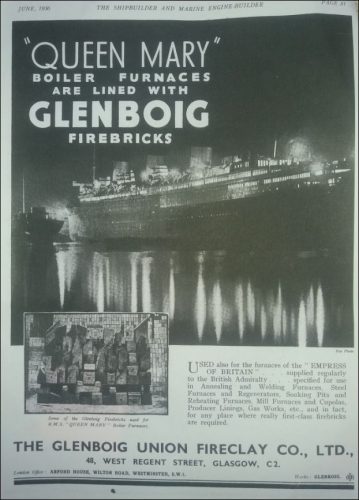 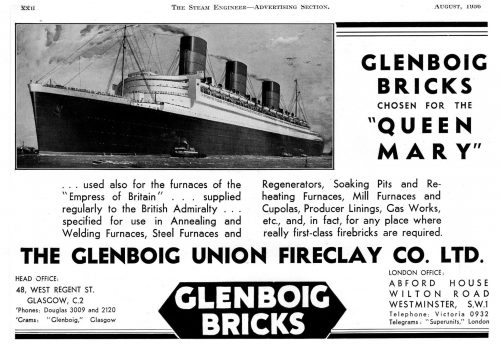 15/04/1937 – Western Mail – Welsh Fair Industries Exhibition – Glenboig firebricks, manufactured from the finest range of fire-clay in Scotland, are renowned for their superlative qualities. These firebricks were used throughout the boilers in the Queen Mary and many other vessels. So great is the demand for these firebricks that the local Labour Exchange has had to close down due to the fact that the Glenboig Company has absorbed all available labour.