16/09/1892 – Annandale Observer – On Monday in Dumfries Sheriff Court, before Honorary Sheriff Substitute Shortt, Charles Wright, pedlar and his wife Margaret Wright pleaded guilty to drunken and outrageous behaviour at Newbie Brickworks, Annan on Saturday night. Wright was also charged with assaulting William Comrie, manager of the brickworks and was fined 7/6 with the alternative of 5 days imprisonment. His wife was fined 5s with the alternative of 3 days imprisonment. (Note – SBH – William Comrie is also recorded elsewhere as William Cormie).

29/11/1893 – Dumfries & Galloway Courier and Herald – On Monday an unfortunate accident happened to a labourer at Annan Brickworks. It appears that James McEwan, North Street, who is in the employ of Mr Mackenzie of Newbie, was engaged with a number of workmen erecting a wire fence at the brickworks. McEwan was cutting a piece of wire, when one of the pieces bounded up and pierced his left eye, rendering him blind. Unfortunately, Mc Ewan is already blind in the right eye, so the accident is all the more serious for the man. Yesterday there was a little improvement in the injury, and the doctors hope he may recover his sight. His nose was slightly scratched with the wire as well.

18/07/1894 – Dumfries & Galloway Courier and Herald – … Mr Comrie, manager of the Newbie Brick and Tile Works supervises members of the Annan Lodge of Good Templars on their annual excursion … 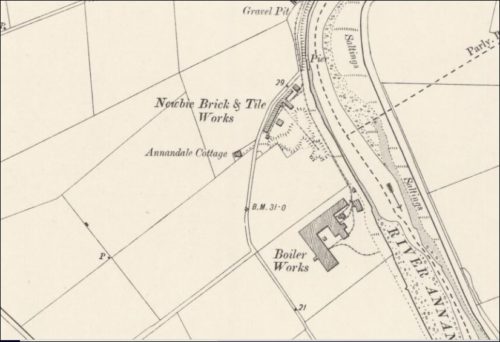 18/03/1898 – Carlisle Journal – The negotiations between Messrs. Cochrane and Co and Mr Mackenzie, of Newbie. having now been finally completed, the erection of the contemplated engineering works on the farm of Waterfootwill be proceeded with immediately. Mr Cochrane arrived at Annan on Tuesday, and a temporary office for the firm has been taken at Bridge-end. As little time as possible will be lost before the works are put into order for active business. One of the first steps to be undertaken will be the extension of the branch railway from Newbie Brickworks to the site of the proposed premises, which is in the next field lower down the river.

21/09/1918 – Dumfries and Galloway Standard – Dumfries Sheriff Court Wednesday Thomas Kerr (13), schoolboy, son of Mary Jane Murray or Kerr, widow, Irving Bank, Annan, was charged with stealing a gentleman’s bicycle from a brick kiln at Newbie Brickworks on 27th August. He pleaded guilty. Mr R. Y. Mackay, P.F., said the accused discovered the bicycle in the kiln and took it away. He had been previously convicted. The accused’s mother, who was present in court, said she was at Moffat the time the offence was committed. The boy had a bicycle of his own. A number of boys had been riding on this bicycle, and her son was probably afraid to take it back, as the owner would thrash him, and he hid it in a cornfield. Sheriff Campion said he expected the accused had got into bad company. He deferred the sentence till 20th December.