1887 – John G Stein took on a 21-year lease for the fireclay at Milnquarter and opened the Milnquarter Fireclay Mine.

c. 06/1888 –  John G Stein forms a partnership with Malcolm Cockburn to proceed with the building of the Milnquarter Brickworks.

c. 09/1888 – The first conical kiln is complete and bricks are fired. A total of 5 such kilns would be on site soon after.

23/11/1892 – Falkirk Herald – North British Railway – Lands required for new railways etc – Certain lands in the parish Falkirk, in the county of Stirling, situated on the south side of, and adjoining the Company’s Edinburgh and Glasgow Railway, between the Greenhill Public School and the Milnquarter BrickWorks,

1894 – Electric lighting was fitted throughout the works and it is claimed this was the first brickworks in Scotland to be so fitted.

07/03/1894 – Falkirk Herald – Falkirk Sheriff Court. Wednesday. (Before Sheriff-Substitute Scott-Moncrieff.) Assaults. —Francis Tain, labourer. Milnquarter Cottages was charged with having, on 21st February, at no 2 Brick-kiln, Milnquarter Brickworks, assaulted Thomas Potts, labourer, Milnquarter, by throwing a ganister brick at him, and striking him therewith on the forehead. Accused pleaded guilty, and was fines, or seven days’ imprisonment. 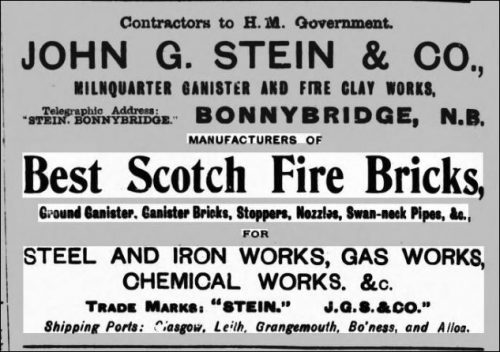 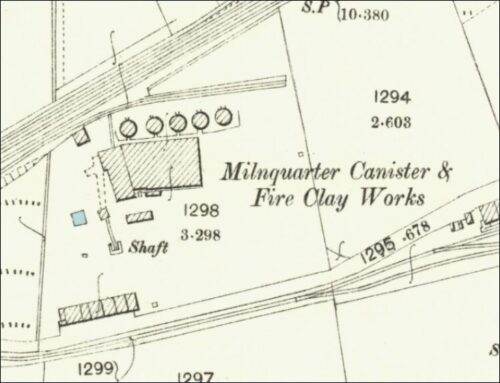 21/01/1899 – Falkirk Herald … Messrs Steins’ gannister and fire-clay works at Bonnybridge have been very busy during the past year, and the same firm has developed a large brickwork at Denny for the manufacture of building bricks …

1900 – The 5 inefficient conical kilns were pulled down and Mr Stein built his own variation of the Hoffman continuous kiln which proved to be a big saving on labour times.

19/05/1900 – Bellshill Speaker – Motherwell and Belshill Railway Bill … John G. Stein, sole partner of J.G Stein, brick manufacturers, Bonnybridge said the firm’s business was hampered on account of there being only one railway to Motherwell; the rate to Motherwell was shamefully high …

1905 – The company was incorporated as John G Stein and Co.

09/03/1912 – Falkirk Herald – The firm of Messrs J. G Stein Co Ltd, Bonnybridge and Castlecary Fireclay Works and the Messrs Dougall and Co, Bonnyside Fireclay Works closed their works on Saturday last due to the restrictions and scarcity of coal. Up to 700 hands are affected by the stoppage. 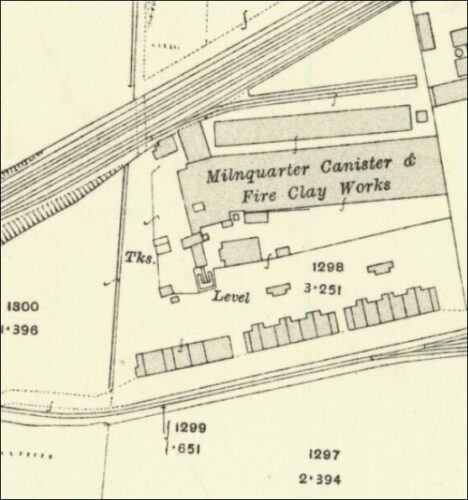 27/08/1913 – Falkirk Herald – Court Action – The action was in the instance of Stewart and Shaw, stevedores, general terminus, Glasgow against John G Stein 7 Co Ltd, Fireclay Works, Bonnybridge. Pursuers sued for payment of £51 2s 6d. which they alleged was due to them for discharging a consignment of bricks and clay which and arrived from the defender’s works in trucks at Glasgow for shipment by the steamer Brya Head on 15 January last.  Stein argued that there should have been no additional charge over the normal agreement and payments whereby goods were loaded and unloaded.  The goods amounted to 1802 tons, 4cwts of bricks and 364 tons 5 cwts of clay which had been transported by railway trucks. The judge found for the defenders, John G Stein.

27/06/1913 – Kilsyth Chronicle – On Friday forenoon a most unfortunate accident took place in Messrs J. G. Stein & Co.’s brick works at High Bonnybridge, whereby Michael Connor (unmarried), clay miner, residing at Glencairn, High Bonnyhndge, was seriously injured. Connor had been at work at the face in Milnquarter Mine, when a large piece of ganister, weighing well over a ton, which had been displaced by a shot a short time previously, came suddenly away from the roof, and struck Connor on the back, pinning him to the ground. The accident was immediately noticed, and steps were taken to clear away the debris and the unfortunate man removed to the surface. This work was expeditiously carried out, under the direction of the underground manager, and on arrival at the top, Mr Pearson attended to the injuries and superintended the removal of the injured man in the Bonnybridge ambulance waggon to Falkirk Infirmary. Connor was in a precarious condition, and there was little hope of recovery.

02/02/1916 – Falkirk Herald – Theft of coal – A girl named Margaret Brown, described as a brickworker, residing at Milnquarter Cottages, High Bonnybridge pled guilty having, on 17th January, at Milnquarter Brickworks, occupied by J. G. Stein and Co., Ltd., stolen 84lbs of coal. Accused, who said she thought there was no harm in taking the coal out of the clay, was fined 5s.

Theft of coal. Evidence was led in the Falkirk Sheriff Juvenile Court on Tuesday a case against Catherine Quin (15), brickworker, residing with Joseph Gaffney, clay miner, Milnquarter Cottages, High Bonnybridge, who was charged with having, on 17th January, at Milnquarter Brickworks, stolen 30lbs of coal. Accused was found guilty, and fined 2s 6d, which was paid the bar.

20/01/1918 – Sunday Post – Sheriff-Substitute Moffat heard proof in an action at the instance of John G. Stein & Co., Ltd., brick manufacturers, Bonnybridge, against Miss Sarah Lennox, brick worker, Milnquarter Cottages, Bonnybridge. The pursuer averred that the defender was a weekly tenant of theirs and only entitled to occupy the house while she was in pursuer’s employment and that although she was duly warned to remove from the house, it being required for the occupation of workman in their employment, she had refused to so. The pursuers, therefore, asked the Court for a warrant to eject defender. The Sheriff held that the pursuers had; failed to prove that the home was required for another worker, and refused to grant decree ejection as craved, and awarded the defender expenses.

11/06/1924 – Falkirk Herald – Richard Mackie, clay miner, residing at Waverley Place, High Bonnybridge, appeared before Sheriff Robertson at Falkirk Sheriff Court on Monday on a charge of having, on 16th May, in Milnquarter Brickworks, High Bonnybridge, occupied John G. Stein & Co., stolen 89 fireclay bricks. Asked if he adhered to his former plea of not guilty, accused stated that he had permission to take bricks before the date of the alleged theft, and he thought that general permission covered everything. Mr W. K. Gair, Procurator-Fiscal said that if accused had gone and asked for the bricks he would have got them. At least he would have got defective bricks which had been rejected. Accused had gone near midnight to the works, and taken away the bricks in two barrow load. He had used the bricks so far in his employers’ interest because he put them into his garden, and from his own idea, improved his house, which was the property of the employers. The Sheriff (to accused) —Do you admit you went about midnight? Accused —Yes; but I understood they were white bricks. After some further discussion, the Sheriff construed the accused’s statements to represent a plea of guilty and asked the accused if he had permission to take the bricks, why he went midnight. Mackie replied that he had been working, and that, was the only time he could go. The Sheriff —There seems to be something to be said for you. It seems a special kind of case, but you must understand that your employers do not approve of the men going at midnight and removing barrow loads of bricks. I dare say that had you gone and asked them you would have got as many wanted. Perhaps the fact that you have been prosecuted will be a lesson to you. In respect of the circumstances, I will not impose any penalty, but in future, you must ask permission before you take bricks away. If anybody else comes up, I am afraid I will have to take it as an ordinary theft and impose a penalty.

20/04/1927 – Falkirk Herald – At the Falkirk Sheriff Court on Monday, before Hon. Sheriff-Substitute J. Harper Orr, Wm. Campbell Lucas, blacksmith, Milnquarter Cottages, High Bonnybridge, was charged with having, along with another man who was dealt with by the Court last week, conducted himself in a disorderly manner and committed a breach of the peace in the blacksmith’s shop at Milnquarter Brickworks, High Bonnybridge, on April 5. Accused pleaded guilty, and Mr Will. Stevenson, solicitor, Falkirk, on his behalf, said a dispute arose between accused and the other man regarding some metal nuts and bolts. The other man made a disrespectful remark about the accused’s wife, and they then fought with each other. Lucas, who was the older of the two, got a black eye and his artificial teeth broken. There was no question but what accused got provocation. The Sheriff remarked that this was an unfortunate squabble, and imposed a fine of 10s. 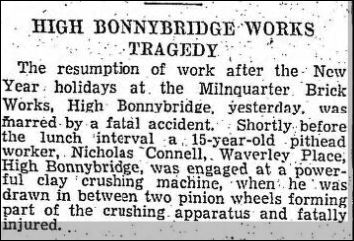 02/04/1941 – Falkirk Herald – Denny man caught in milling machinery – A distressing fatality occurred at Milnquarter Brickworks, High Bonnybridge, on Monday, the victim being Thomas Mclnroy, who resided at 37 Broad Street, Denny. It appears that while acting in the capacity of mill attendant at the brickworks, Mclnroy was caught in the rollers of the milling machinery and was severely crushed about the lower part of the body. He was removed to Falkirk and District Royal Infirmary, where later in the day he succumbed to his injuries.

13/05/1942 – Falkirk Herald – Bolt in machinery. High Bonnybridge girl’s malicious act. Martha Reid, Milnquarter. Cottages, High Bonnybridge, was charged before Sheriff Hendry at the Falkirk Sheriff Court on Monday with having, on 20th March, in the brickwork stove at Milnquarter Works occupied by John G. Stein & Coy., Ltd., maliciously thrown into a brick-making machine, which was in motion, a steel bolt whereby the machine was damaged. Mr Andrew Bradley solicitor, Falkirk, tendered a plea of guilty on behalf of accused, whom, he said, was now working in England. Mr A, G. Anderson, Procurator-Fiscal, said accused at the time was employed at this works, and for some reason, best known to herself she threw a bolt among the machinery, which was brought to a stop. There was no doubt that the act was deliberately done. She asked a workman for a bolt, but he did not know what she wanted it for. Accused was 20 years of age. Mr Bradley said the explanation which had been given him was that the work was extremely heavy, and apparently, the idea of throwing a bolt into the machinery was to allow for a break-off in the heavy work. She had written to the effect that was extremely sorry for having committed the offence, and that at the time she did not realise how serious the matter was. She was earning of 46s per week. She paid 25s for board and 3s for travelling expenses. A fine of £3 was imposed, with the option of ten days’ imprisonment. 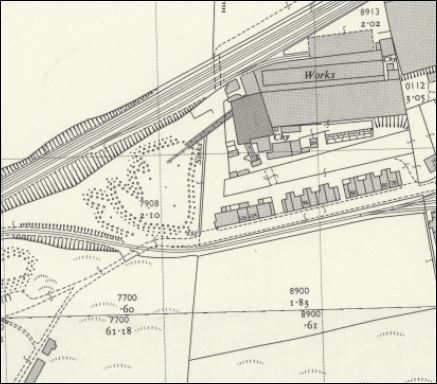