1899 – Castlecary Fireclay Works were opened after a 31-year lease (with a further 31-year option) was signed with the Marquis of Zetland.

Below- 01/08/1906 – Kirkintilloch Herald – Messrs John G Stein & Co Ltd, brickmakers, Castlecary were in court for employing to women to work at 0300 in the morning when women were not permitted to start work until 0600. 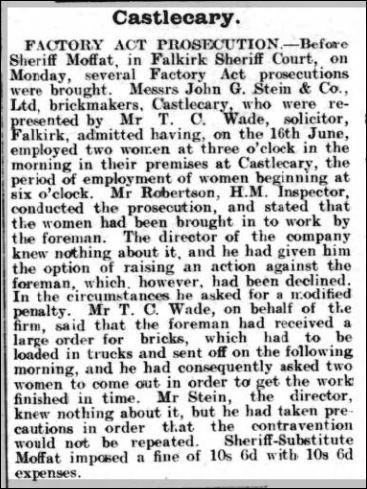 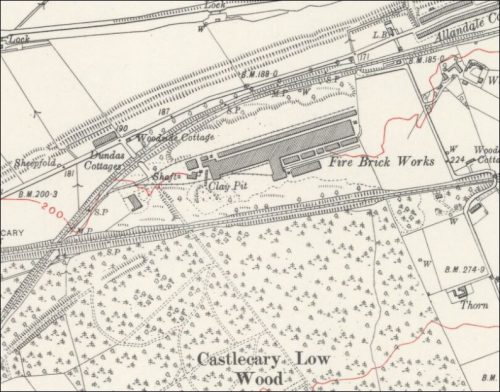 12/12/1914 – Falkirk Herald – Valuation of brick manufacturers premises. Case in the valuation appeal court. At a sitting of the valuation appeal court held in Edinburgh on Saturday, before Lords Johnston, Salveson and Cullen, judgement was given in the appeal in which Messrs John G Stein and Co Limited, brick manufacturers, Bonnybridge, asked the court to delete the entry of £60 as the yearly value of their offices, house and laboratory at Castlecary, Bonnybridge. The appellants are lessees of certain fireclay and other minerals on the estate of Castlecary belonging to the Marquis of Zetland. During the last 8 years, the appellants had wrought the seams of fireclay etc and manufactured bricks. In addition to the manufacture of bricks at the works at Castlecary, they also carry on the business of brick manufacture at Bonnybridge and Denny as tenants of the proprietors. In 1913 the appellants erected near the works at Castlecary a building containing offices, laboratory, balance room, a strong room, a pay office, a dining room for the office staff, a dwelling house for a caretaker and a motor car house, the cost of the building being over £3000. The offices are used as the head offices of the company and business is transacted there, not only in connection with the works at Castlecary but also in connection with the works at Bonnybridge and at Denny. The appellants pay the proprietor of the minerals lordships but no other rent is paid for the building. The question in the case was whether the building should be entered in the roll as a separate subject … the duration of their lease is 31 years from Whitsunday 1899 … There was a small fixed rent exigible with the alternative in the landlord’s option of 2d for every 22 1/2 cwt of common clay, or if manufactured into bricks for every 20cwt of bricks. Where the clay was fireclay and the bricks, fire bricks, the royalty was 3d …
22/12/1916 – Kirkintilloch Gazette – Poem by Rodger Ford, Allandale.
Steins Brickworks.
Do you ken John J. Stein’s Brickworks,
Very fine and great and bigworks,
The very best of their kind
That in Great Britain will find?
If you should want employment,
You will get good pay, time for enjoyment;
If of hard work you are not afraid,
You will be respected and well paid;
He is smart and clever, never mean,
A self-made man is John J. Stein.
Well my friends, ’tis good plan,
To follow his footsteps if you can.
Well, of course, I do my bit,
As I work down in the pit;
The manager, Alexander Wallace,
No better man from here to Calais,
No better man than Alexander,
A smart and clever true Highlander:
The bright and Bob McLean,
Is pit-fireman for John J. Stein;
Well, of course, opinions vary –
Stein’s brickworks are near Castlecary,
Well-built and fine, sublime and grand,
Perhaps the best in any land
10/08/1917 – Kilsyth Chronicle – There were prospects of a strike of Messrs Steins Castlecary Fireclay workers on Monday but acting on the advice of the Union officials a stoppage of work was in the meantime postponed. The workers are after considerable increases claiming that they are paid 8s less than the rates paid to similar workers under the Glenboig Company.

1919 – 1922 – Allandale village was built to provide housing for the workforce at the Castlecary works.

17/01/1920 – Aberdeen Press and Journal – A ballot of the Castlecary Fireclay miners of Messrs J.G.Stein & Co has resulted in the majority voting for a strike to enforce recognition of the local union officials at this company’s High Bonnybridge Works where the miners are out on strike.

05/05/1922 – Kilsyth Chronicle – Fireclay Works close – The closing down of Messrs J.G Stein & Co’s extensive fireclay works at Castlecary, which had been threatened for some time unless there was a spirited revival in trade has caused much disappointment all round. Messrs Stein have kept their works going through the bad times but stocks have accumulated to such an extent that a stoppage has been rendered necessary and it maybe two or three months before a resumption of work is made.

1927 – Alan Stein takes over the company after the death of his father John Gilchrist Stein.

1928 – Dr Hyslop was the first chemist in charge of the laboratory.

21/09/1929 – Falkirk Herald – Marquis of Zetland’s visit – On Monday afternoon the Marquis of Zetland paid a visit to Castlecary Fire Clay Works of Messrs John G Stein Ltd. On his arrival, he was met by Col. Stein and was conducted over the works. The Marquis showed great interest in the various departments of brickmaking.

22/05/1939 – Edinburgh Evening News – John G Stein & Co Ltd, Castlecary Fireclay Works are to give every employee who has  1 years service or over a weeks holiday with pay in the summer. Those with less than a years service will receive one day’s pay for every 2 months service.

06/12/1947 – Falkirk Herald – Struck by a buckle. A further brickworks fatality was inquired into. On 17th October, David Jamieson (58), charge-hand, 60 Allandale, Bonnybridge lost his life at Castlecary Brickworks belonging to Messrs J. & G. Stein & Co., Ltd. The evidence was to the effect that Jamieson was found lying seriously injured underneath the driving wheel of a crushing machine, and was found to be dead when taken to the ambulance room of the works. A repair had been done to the motor of the machine which had been started up again. No one saw what had happened.  Jamieson was last seen outside the wooden guard of the machine. Jamieson was found inside the guard, lying underneath the machine. He was in a crouching position. The buckle of the moving belt had struck him on the head. A formal verdict was returned. 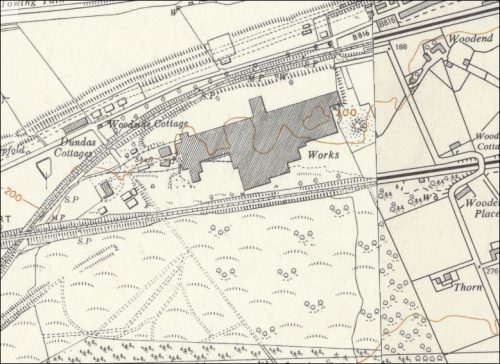 03/11/1951 – Falkirk Herald – Electrician wanted; must be skilled in maintenance and repair of all types of motors. Maintenance men and machinists wanted. Must be members of the A.E.U. Apprentices also required to train in these trades. Apply to John Stein  & Co, Castlecary Works, Bonnybridge.

01/1959 – New plant is built to manufacture cements and patches.

07/1960 – The production of the Myrtle, Bluebell and Daisy silica bricks ceases.

1965 – An early computer is installed at the works. This is believed to have been the first installed at a brickworks in Scotland.

1970 – GR-Stein Refractories Ltd was formed by the merger of John G. Stein and Co and General Refractories of Sheffield. GR-Stein became a subsidiary of Hepworth Ceramic Holdings Ltd.