11/11/1911 – Falkirk Herald – Sequel to a clay mine fatality – ln Falkirk Sheriff Court Thursday, a public inquiry was held in presence of Sheriff Moffatt and a jury, in regard to the death of Clark Reid, miner, Loch view, High Bonnybridge. From the evidence led it appeared that the deceased was at work in the main haulage road in Milnquarter Clay Mine, High Bonnybridge, occupied by John G. Stein and Company, brick manufacturers when a large piece fire clay fell upon him from the side of the road and struck him on the neck. He was instantly killed. Four witnesses were examined, and at the close of the evidence, the jury, without retiring, returned a formal verdict. 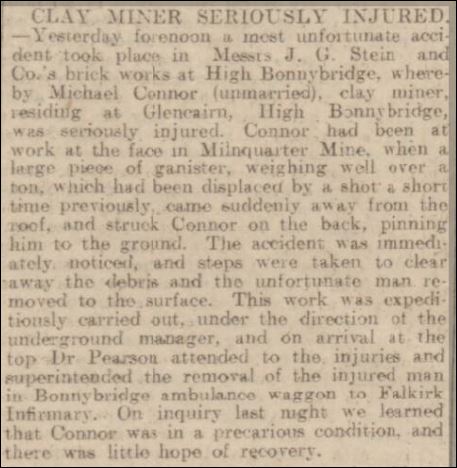 13/05/1916 – Daily Record – While at the working face Milnquarter Clay Mine, Bonnybridge, Daniel Mackay (32), Milnquater Cottages, and John Alexander (25), Waverley Place, Bonnybridge, were seriously injured through a fall of ganister which came suddenly away from the face of the mine.

27/06/1928 – Falkirk Herald – Fireclay mine accident. The circumstances of the death of Wm. McMurdo Wells, clay miner, Milnquarter Place, Bonnybridge, were also inquired into. While working on 4th June in the Milnquarter Fireclay Mine, Bonnybridge, occupied by John G. Stein & Co., Ltd., Wells was injured by a fall of fireclay and ganister and died the same day in Falkirk and District Infirmary. Mr Thomas Cassells, solicitor, Hamilton, appeared on behalf of the relatives, while Mr Hugh P. Black, solicitor, Falkirk, represented Messrs John G. Stein & Co., Ltd. David M Kay, mine manager, Milnquarter Cottages, High Bonnybridge, said he was the manager at the Miluquarter Fireclay Mine. On June he had visited Wells, who was a very skilled and careful workman. He spoke to him for about a quarter of an hour regarding a bad portion of the mine which Wells wanted to be propped up, and it was only about quarter an hour after leaving him that he heard of the accident. On going back to the place Wells was being carried out. He was in bad condition and was taken to Falkirk and District Infirmary, where he died at 11.30 o’clock, without regaining consciousness. Witness later visited the place where Wells had been working and saw that about four tons of ganister and clay had fallen from the side of the working place. So far as he could see, the portion that had fallen out had been in a perfectly safe condition that morning. It had shown no signs of falling away, and it was an entirely different portion which Wells had asked to be propped up. Daniel McKay, mine fireman, Milnquarter Cottages, said he erected a prop in the place where Wells was working, but the fall had occurred some distance away. William Reid, Milnquarter Cottages, said he was drawer to Wells, and when going to fill his hutch he heard Wells groaning, and saw him kneeling against the stoop. He assisted to carry him away. Corroborative evidence was given by John Paton, clay miner, Waverley Place, High Bonnybridge. Dr William Brown, resident medical officer at Falkirk and District Infirmary, said he examined Wells, who was badly injured, having a fracture of the skull, right scapular, and several of the ribs on the right side. A formal verdict was returned.

16/08/1930 – Falkirk Herald – Bonnybridge fatality. Distressing occurrence in Milnquarter Clay Mine. On Thursday forenoon a most distressing accident occurred at the Milnquarter Works of Messrs John G. Stein & Co., Ltd. It appears that a fall from the roof had taken place in the mine, with the result that a miner named Mitchell was pinned underneath, The unfortunate man was at once conveyed the surface, but expired shortly afterwards. Mitchell, who lived in Wayerley Place, High Bonnybridge, was 49 years of age and had been with the company for about 30 years.

01/11/1930 – Falkirk Herald – Fatal fall of stone. The Court then investigated the death of William Mitchell, clay miner, Waverley Place, High Bonnybridge, who was working on 14th August at Messrs J. and G. Stein’s clay mine, High Bonnybridge, when a large stone fell on him from the roof of his working place, causing injuries to the spine and legs from which he died shortly afterwards. David McKay, mine manager, Milnquarter Cottages, High Bonnybridge, said that he was in charge of the clay mine at Milnquarter where the deceased was employed. The clay seam where Mitchell was working was about seventeen feet high. The method of working was by stoop and room. The clay on the floor was worked out first to a height of about seven feet. The clay above was brought down with gelignite. Mitchell had been employed in the mine for about ten years. When he learned of the accident the witness went to Mitchell’s working place and found that he had been carried out from the face and placed on a platform. The witness spoke to him and obtained a soft reply. He was taken to the surface and died in the ambulance wagon. The roof of the place where he was working was of solid rock sandstone, and a piece of this stone, measuring about 2 feet 9 inches broad and six inches thick at the centre, weighing fully a hundredweight fell from the roof. Daniel McKay, mining fireman, Milnquarter Cottages, High Bonnybridge, described how the examination was usually carried out in the pit. An acetylene lamp was shone on to the roof. The place from which the stone fell had been examined and brushed a fortnight previously, Witness noticed nothing wrong with the roof nor was there anything to indicate that the sandstone would fall. All the unsound stone had been removed a fortnight before. William Reid, miners’ drawer, Milnquarter Cottages, High Bonnybridge, said that was working in company with the deceased when the accident happened. The last shot had been fired the night before to bring down the gannister. Mitchell was bending forward at the time when a bit of rock fell from the roof and struck him on the back, knocking him down. The witness ran to the next place for help. No explosive had been used that morning. The jury returned a formal verdict in accordance with the evidence.

18/11/1939 – Edinburgh Evening News – William Wells, a married man, residing at Broomhill, Bonnybridge, Stirlingshire, was killed today in Milnquarter Fireclay Mine, Bonnybridge. A portion of the roof of the underground working collapsed, and when extricated he was found to be dead. 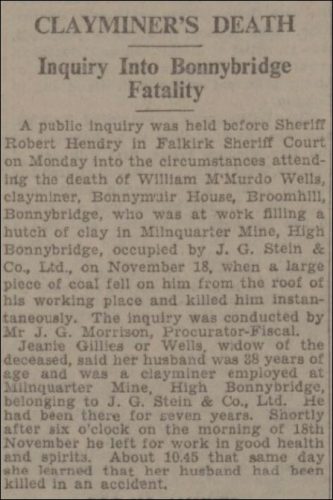 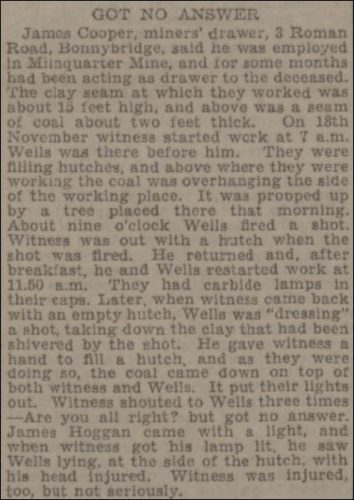 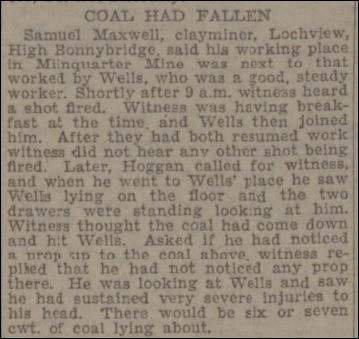 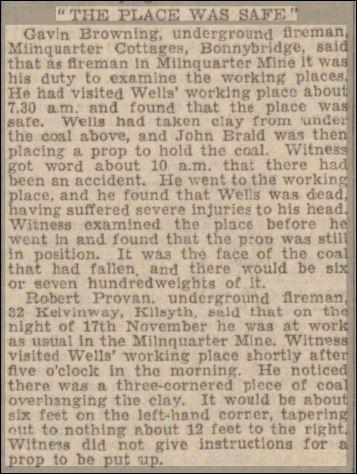 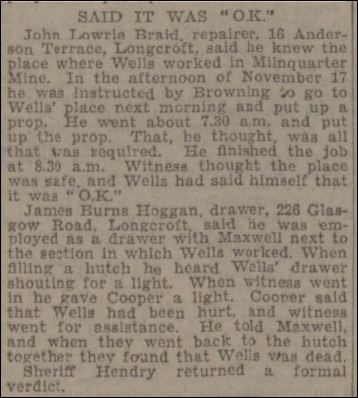 05/12/1942 – Falkirk Herald – Hutch pinning charge. Geo. Robertson, 1 Drove Loan, by Denny, was before Sheriff Hendry at Falkirk Sheriff Court yesterday charged with having at the Milnquarter Clay Mine, High Bonny bridge, by an act of hutch pinning, attempted to defraud two workmen of 1s 6d for work done. He pleaded not guilty, but was convicted on evidence and fined £4, with the alternative of twenty days’ imprisonment. (Note – SBH – Hutch pinning – to substitute dishonestly one’s own tally for another’s on a more fully loaded hutch).

c. 1949 – By the end of the 1940s the clay at the Milnquarter Mine was almost worked out and a new mine was started at Tippetcraig.

17/03/1951 – Falkirk Herald – Two men killed at clay mine.  Sheriff Macgregor, K.C., and a mixed jury conducted two fatal accident inquiries at Falkirk Sheriff Court on Wednesday. The accidents involved the deaths of three men who died from injuries received in the course of their employment. The first inquiry was into the circumstances attending the deaths of Samuel Skillen, clay miner, 90 Broomhill Road, Bonnybridge, and Alfreds Ziedins, clay miner’s drawer, a displaced person from Latvia, 28 Forth Crescent, Stirling. Both men were working underground at Milnquarter Clay Mine, Bonnybridge. belonging to Messrs J. G. Stein & Co., on 10th February when they were buried and fatally injured by a fall of over 20 tons of clay from the sides and roof of the mine. John Lowrie Braid, repairer at the mine, 16 Anderson Terrace, Longcroft, said he was working underground with the two deceased about 10 a.m. on Saturday, 10th February. They were working on the west side of the mine, where Skillen was boring a hole in the clay face preparatory to the firing of a shot. Witness and Ziedens were standing a few feet away when there was a fall from the sides and roof. Up to that time, everything appeared to be perfectly safe. A shot had been fired perhaps an hour before the accident. After this shot, the place had been examined because the men were working there. The fall buried the two men and the witness, but the witness was not so badly entangled as the other two. The witness was knocked up against a hatch but he helped to get the men out. They were dead when taken out.

05/12/1951 – Falkirk Herald – Embezzled Union Funds. After he had been dismissed from his employment because of irregular attendance, it was discovered that Jerzy Bogulsaw Stolecki (28), 64 Broomhill Road. High Bonnybridge, had embezzled £39 6s 6d in contributions to the funds of the National Union of Mineworkers. This was stated at Falkirk Sheriff Court on Monday, when Stolecki admitted the offence. He was sent to prison for 30 days by Sheriff Macgregor. K.C.. who said it was a mean type of offence to embezzle money from work-mates. Mr A. G. Anderson, Procurator-Fiscal, said that while in employment in Milnquarter Mine, High Bonnybridge, Stolecki had been appointed as a collector of Union contributions. The discrepancy in the accused’s books was discovered after he had been dismissed from his employment through irregular attendance. Stolecki, stated to be married, but living apart from his wife and family, had nothing to say.