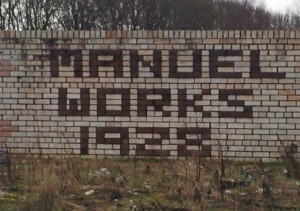 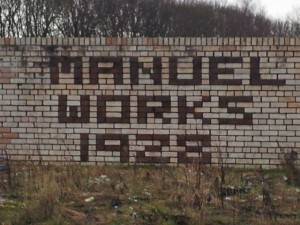 07/11/1931 – Falkirk Herald – Industry in Falkirk … The manufacture of firebricks, which in past years has been numbered among the “hardest hit’’ of all local industries, is giving indications of a return to better times. Messrs J. G. Stein are hoping that with the revival in the steel trade their opportunity will arrive, and the firm is at present engaged in extending their works at Manuel. A number of extra workmen have been engaged. English buyers have discovered that the quality of firebrick manufactured across the border is much lower than that of the Scottish product, and as a result there is a brisker demand to be met by the local manufacturers …

19/11/1931 – The Research Director, Dr Hyslop took out a patent (361, 166) with regard the process of oxidising the carbon in the Nettle clay at under 750 deg C to produce a low temperature calcine as the high carbon content of the clay limited the rate of burning the bricks. This process resulted in a greater density brick – branded NETTLE D.

1933 – 1943 – Dr Hyslop took out a further 4 patents covering different processes involved with the extraction of alumina from fireclay. 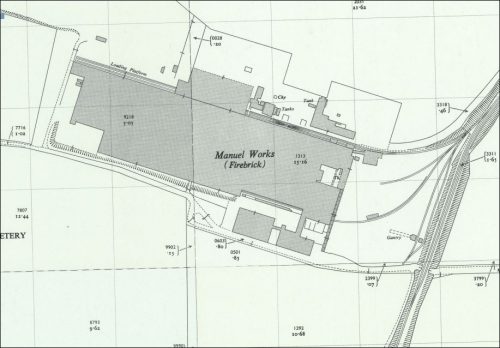 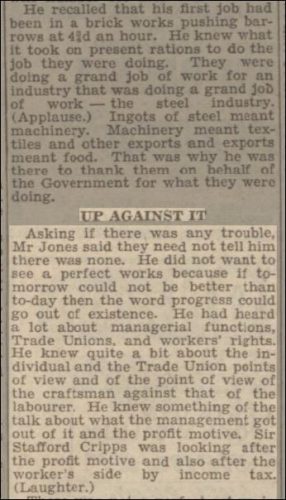 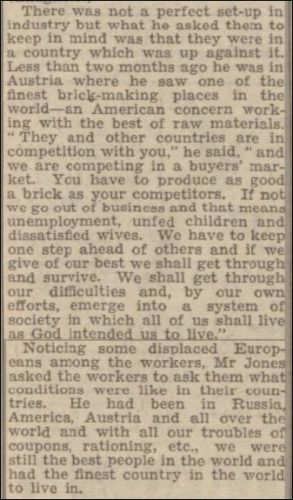 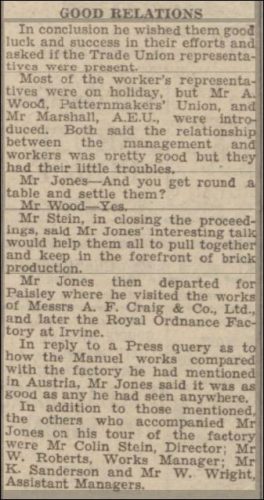 09/1956 – No 5 kiln was started and came into production the following year. It was used to fire high alumina or basic brick as required by the market. Bricks such as the high alumina brand Stein 73 were fired in this kiln.

03/10/1958 – West Lothian Courier – Fatal accident. When at work in Messrs Stein’s Brickworks (Manuel Works?) on Monday morning, Gilbert Hassel, 5 Avontoun Crescent. Whitecross was crushed by a mechanical shovel, death being due to chest and spinal injuries. Mr Hassel, who was 40 years of age, is survived by his wife and two children. aged 18 and 15.

1985 – HCH comes to an agreement with British Steel Corporation (BSC) to merge its refractory subsidiary, GR-Stein Refractories with the BSC Refractories Group. HCH would own 78% and BSC 22% of the enlarged refractories group.

2012 – December  Cookson group floats its refractory division as Vesuvius Plc And renames the rest of the Cookson group as Alent Plc.
2020 – Vesuvius Plc remains an international leader in the refractories industry and continues to make and sell its legacy brands such as Nettle, Stein, Sillmax, Alro, Supermag, Contex, Durax and many other GR-Stein brands though most of them are manufactured in plants outside of the UK.

Some additional insight – Eric Flack states – From 1959-1965, I used to work for a consulting analytical chemists in Glasgow. They specialized in chrome ores amongst other things. Steins Manuel Works used to import Masinloc Chrome Ore ground to under 1/4 mesh. It came in 4,000 ton “lots” as ships ballast in the Ben Line-mainly. I would spend a few days each month sampling the ore. It went mainly by lorry to Whitecross and sometimes by rail; via the tippler at Manuel. The chrome was around 32-35% Cr203 and 20-25% Al2O3. They made a very heavy Chrome refractory brick. Stein also imported ilmenite from Rhodesia and Rhodesian Chrome. They sometimes bought Turkish chrome but it was not so good. But mainly Masinloc Chrome Ore.  Then went to work with British Steel where I did a weekend shifts-extra overtime- rebricking electric arc furnaces! With Stein’s chrome bricks!

Below – Date unknown – Aerial view of the Manuel Works. 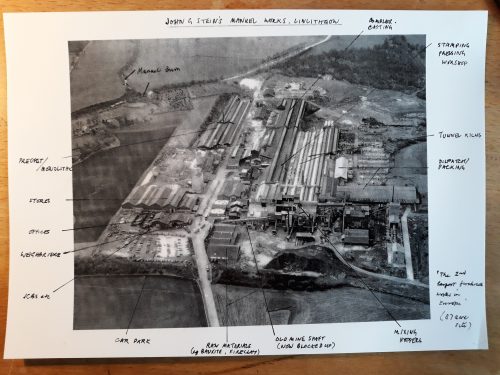 Below – Source Falkirk Heritage and Archives.

Construction at the yard began in November 1902 with the works finally opening in April 1904.

In the 1920s the Company was hit by the depression and this adversely affected the demand for fireclay and silica bricks. Stein, however, retained a good market and opened a research laboratory in 1930.

In 1937/38 further expansion was completed and Castlecary became the head of GR Stein’s Scottish Operations.

1970 – JG Stein & Co Limited merged with General Refractories Limited and became a member of a group headed by Hepworth Ceramic Holdings Limited. During the remainder of the 1970s and despite the selling up of a ‘special products’ unit, the site was slowly run down.

1980 – Main offices closed and shortly after, all production.

Raw materials – Fire bricks were made from raw materials found in a fireclay mine in Castlecary Estate and leased from the Earl of Zetland.

Two words imprinted on one of the last bricks ever made at the former GR-Stein works in Whitecross.

But that simple memorial does not even begin to tell the story of a remarkable workplace renowned throughout the world and loved throughout Falkirk district.

Only a skeleton staff now remain at Manuel Works, near Whitecross there to see the once-grand site recede into shadow along with the memories of the people who worked there.

Their industry and toil made the brickworks famous. But in the end, they were not enough to keep it open.

At its peak, there were more than 1200 employed there almost everyone in the district had a relative who found their way to the works,  some for a summer, others for a lifetime.

Its passing marks the end of one of the last great family employers. Generations of families worked at Manuel and helped make it a success.

Workers no longer throng in and out of the gates, but their voices and spirit still echo in the site.

It opened in 1928 and eventually rose to become a world-leader exporting to 120 countries.

Operations Manager Robert McMeechan (56), of Stenhousemuir, will be the last to leave. He has overseen the shutdown since it was announced 15 months ago.

He told the Herald: ”Most of the people had worked here for 20 to 30 years they spent a lot of their lives here.

”The place was full of families. It was a great family place. It s good for your business to have families. They re all looking after each other, but they re also making sure they re all doing what they should be doing.

”It was a haven for people, to be honest. There were a lot of people from universities who came for the summer.

Around 240 people were employed at Manuel when the closure was announced, a far cry from the 1200 employed in the early 1970s.

But the effort from the workers who remained throughout the closure period never faltered as they completed orders to be sent to America and Chile.

Robert said: ”The workforce was excellent, they did brilliantly. They kept working right until the end.

”The quality was so great, they were coming here to get the last orders. People from the entire world wanted bricks from here before it shut down.

Manuel exported to 120 countries mostly through Grangemouth Docks. Raw materials came to Whitecross from across the globe.

In a good year, around 100,000 tonnes of bricks were produced. Manuel Works won the Queen s Award for exports in 1987.

It produced refractory bricks, for furnaces, and monolithics concretes and cements to put the bricks together. Brick production has been shifted to Poland, while the monolithics have gone to Chesterfield.

Its products were used for the making of steel, cement, glass and aluminium.

Robert said: ”The Manuel quality is why we were the best in the world, but you reach a stage where you re not competitive. It doesn’t matter how efficient you are.

”John G. Stein had a lot of foresight, knowledge and skills, said Robert.

In the late 60s, the Stein family agreed to a merger with General Refractories and became GR-Stein.

The Stein family left a short time later, but the name lives on and will continue to do so. Even though the brickworks have shifted to Poland, the products will continue to bear the famous Stein brand names.

Hepworth Refractories took over in the 1970s, Alpine made it Premier Refractories around 1997 and current owner Vesuvius took charge around three years ago.

Works at Castlecary, Glenboig and Chapelhall closed in the early 80s and everything was centred at Manuel Works.

His grandfather, father, uncles and brother, William who was made redundant in the closure all worked at Manuel.

Roberts role is now to wind up Manuel and oversee the last couple of orders going out and equipment being shipped away.

He started in June 1961 as an apprentice electrician and remembers the many ”fantastic characters.

It was his task laterally to ensure the shutdown went as smoothly as possible. He said he was glad training took place to help workers find other employment.

Robert said: ”I’ve had to live with this for a long time. There has been a closure programme for 15 months. I just had to focus on the job.

Pre-cast operator John McLeish (51), from Falkirk, was one of the many made redundant. Fortunately, he recently secured new employment after 22 years at Manuel.

”I made a lot of friends up there, he said. ”You really miss your workmates. I enjoyed the work I did. It was a good job.

He described the feeling of looking for a new job as ”soul-destroying and said it affected his whole family, however, he is looking forward to 2002.

”It was a strange feeling when I knew I wasn’t going to go back to that place, he recalled. ”I feel sorry for some of the guys who had been there since they left school. It s all they’ve ever done.

He said he had kept in touch with former workmates, some of whom had become like family.

Braes councillor David Speirs described the closure as a ”dreadful blow for the area.

”It’s genuinely sad, he said. ”I know a lot of people who worked there. People with families and mortgages.

However, he expressed hope that new employment could be created in the area.

Ian Imrie (46), convener for the Transport and General Workers Union at Manuel, said it was a ”sombre atmosphere towards the end.

He paid tribute to the workforce for working through the difficult closure period.

”The workforce bent over backwards to help the company out in the last year, he said. ”If it wasn’t for the workforce they would never have got out the orders.

Mr Imrie is now seeking employment. It is a plight he shares with many of his former workmates. 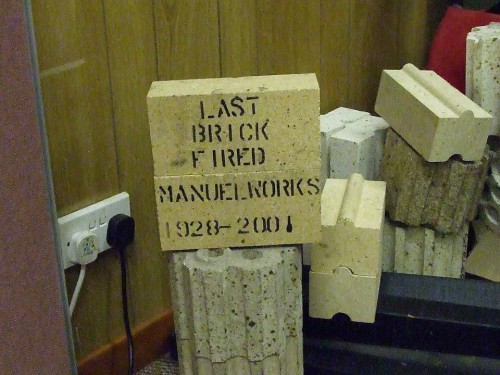 …….and this too  – Annet House Museum Linlithgow 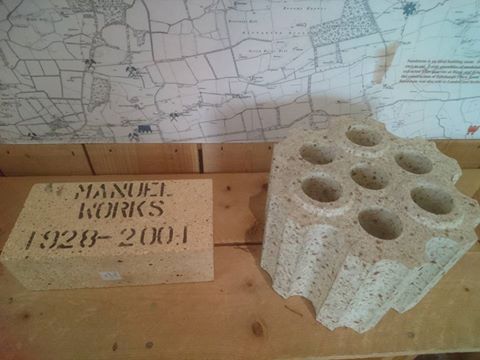 Extracts from the newspapers at the time of Manuels closure

“Today (Friday) marks the end of an era when the lights go out for the last time at Manuel Brickworks in Whitecross.

The facility has employed thousands of villagers and many more from the Linlithgow, Bo’ ness, Bridgend and Maddiston areas for decades.

Its workforce has dwindled dangerously after changing ownership several times in recent years after a long period of stability under the GR Stein banner Now the works officially close today and electrician, Robert McMeechan has the unenviable task of shutting down the works where he has been employed since he was 16 years old

There has only been a skeleton staff working in recent weeks with hundreds departing over the past few months most of them knowing no other work than what they did at the brickworks plant.”

Said local amateur historian Murdoch Kennedy this week: “I was reminded of the words of the late George Charleston in a poem about the closure of another local employer Lochmill  when he wrote:

The latest local victim of, the economic knife was to them, not just a workplace but, far more, a way of life

Added Murdoch: “I have no doubt however that the sadness of Steins final closure will provoke many memories of happier times “

Jock Bailie’s breaking up the road

He needs yer lorry to take the load

When the digging-oot is aw complete

A’ at their side worked Jimmy Hume

An’ frae Brigend wha’ did they send

Because the road is awfie nairy

Are passin by here aw the day

He’s pokin here and pokin there

Aw ready for the concrete mix

Tae mak an even, level road

For heavy traffic every day

Among his workers, no a fraud

As honest as the day is long

They’ll work until the whistle’s gone

Tae be in chairge o’ sic a squad