Lilliehill Fireclay and Terracotta Works. Messers. Lindsay & Anderson began these now extensive works on 7th May 1867.  About 100 persons are employed at the works.  Here terra cotta work of the finest quality is manufactured; sewerage pipes, fire bricks and many other articles made from clay are turned out in large quantities, and sent to the most distant parts of the kingdom, as also to Sweden, Norway, Denmark, and ports on the Black Sea, &c.  The works are about two miles northeast of Dunfermline. Source

Lindsay and Anderson were established in 1867 and were based at LillieHill Fire Clay and Terra Cotta works, Dunfermline, Scotland where they manufactured an extensive range of clay products for the building trade as well as decorative items including vases and pedestals, fountains, statuary and rustic furniture.

Little survives of Lilliehill Fireclay Works, which was situated in the Y of a railway junction to the E of Cairncubie Road. The works are depicted as roofed on the 2nd edition of the OS 25-inch map (Fifeshire, 1896, sheet xxxiv.12) but disused on the subsequent revisions of 1913 and 1938. The only structure now standing on the site is part of a brick-built building (one brick found in situ was stamped J & M Craig Ltd, Lilliehill, Dunfermline). The works lasted from 1873 to the 1920s and the site was cleared (demolished) in the 1970s (Douglas and Oglethorpe 1993).  A quarry to the N has been largely filled in and reclaimed. (Cleish 91.147). Visited by RCAHMS (SH), 6 September 1991.

22/06/1867 – Dunfermline Saturday Press – Reference to Robert Lindsay, brick manufacturer, Lilliehill being a witness at a trial.

1871 – International Exhibition, London – Pottery – Terracotta, Stoneware, firebricks– page 89 states – Lilliehill Terra-cotta Co, of Dunfermline, have a bust of Apollo and a terra-cotta vase of some merit. 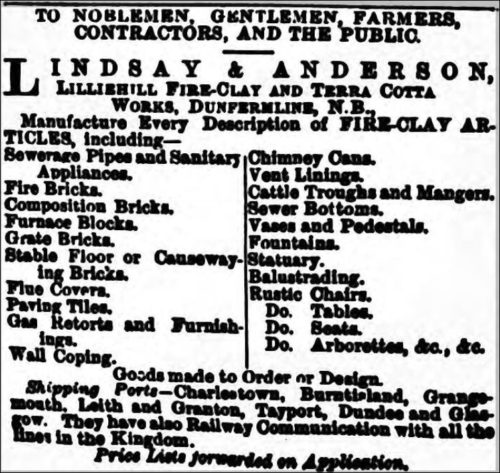 Below – 09/04/1874 – Edinburgh Evening News – David Barrie, Pavement merchant selected as an agent for Lindsay and Anderson. 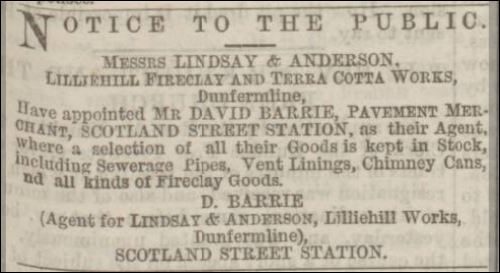 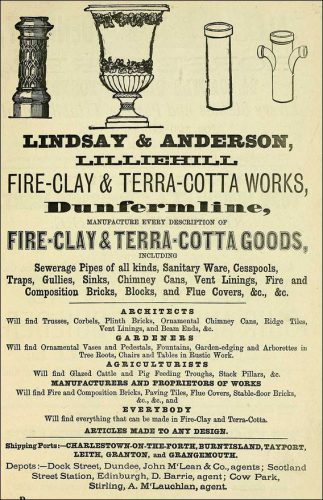 Below – 05/12/1877 – Dundee Courier – Notice to Architects, Builders and Contractors – Lindsay & Anderson, Lilliehill Fire Clay Works, Dunfermline beg to intimate that they have opened their depot at East Dock Street, Dundee (foot of Peep O’Day Lane) where a large stock of goods will be kept, including sewerage pipes, bends, branches and sanitary appliances, vent linings, chimney cans, fire and composition bricks, flue covers, paving tiles, Kinnaird bricks, troughs, mangers, and other fire clay goods. Goods made to order and to any design. All orders are punctually attended to. 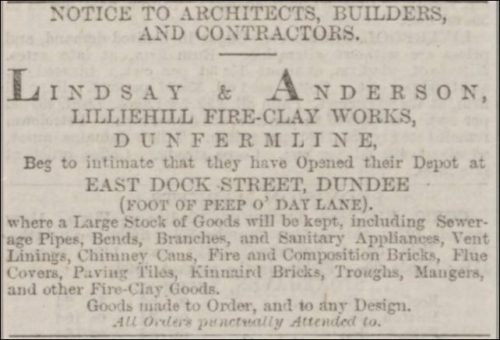 21/11/1878 – Fife Herald – At Lilliehill Brickworks on Monday nearly 25 men were paid off owing to the general dullness of the trade.

29/07/1879 – Dundee Advertiser – Highland Society Show at Perth … Statutory of an artistic character and fireclay work for practical purposes is represented by Messrs Lindsay and Anderson, Dunfermline and Dundee at stand no 122. The collection comprises of ornamental vases, rustic garden chairs and piping of various descriptions and sizes. An imposing vase about 11 feet high surrounded by cupids and dolphins is most attractive in design and beautifully finished. A fireclay pipe of improved construction for conveying water under pressure is exhibited and is apparently a great improvement on the ordinary pipe being much stronger at the joints. It is a 3rd cheaper than lead …

10/01/1882 – Banffshire Journal – The gale which occurred on Friday last did considerable damage to property in the Southern districts of Scotland. At Dunfermline, a chimney stalk at the Lillies’ Hill (Lilliehill) Brickwork was blown down and two men were killed, namely, James Gillespie aged 60 years and William Gillespie, his son, aged 32 years. (The Ayr Advertiser – 12/01/1882 – states Mr James Gillespie was the manager of the brick and tile department) 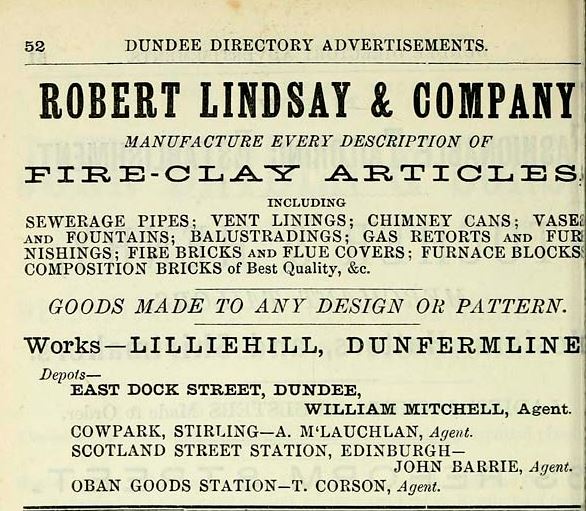 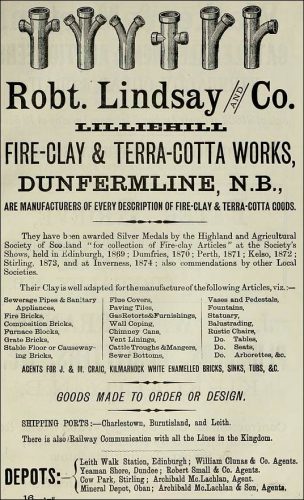 Their enamelled fire clay sinks received Silver Medal at the London International Health Exhibition, 1884 and First Prize Medal from the

And also obtained Highest Awards at Glasgow, 1883 and Newcastle, 1882,

from the Sanitary Institute of Great Britain.

Buchan’s Patent have received highest awards wherever exhibited and are Patronized by the Government Departments, and by the leading Architects,

Physicians, and Sanitarians in the Kingdom; and in use at Balmoral Castle.

None are genuine unless stamped ‘Buchan’s Patent’ and with our names as Sole Makers.

Price Lists and all information on application at Head Office, Kilmarnock.

Offices at Glasgow, Edinburgh and Greenock. Agencies in most of the principal towns in England, Scotland and Ireland. Edinburgh Depot and Office— 3 Canning Street. Dochard and McLean. Agents. 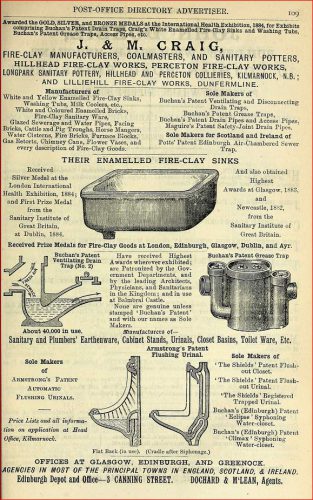 20/04/1888 – Fifeshire Advertiser – Glasgow Exhibition – Lilliehill Fire Clay and Terra Cotta Works – The Messrs J & M Craig, Lilliehill Fire Clay and Terra Cotta Works, Dunfermline, are to be exhibitors at Glasgow of a large assortment of terra cotta statuary and vases.  A good deal of really artistic work will be displayed in the moulding and adjuncts of the figures.  The same firm will also send an arrangement of their Kilmarnock enamelled bricks, washtubs, &c. 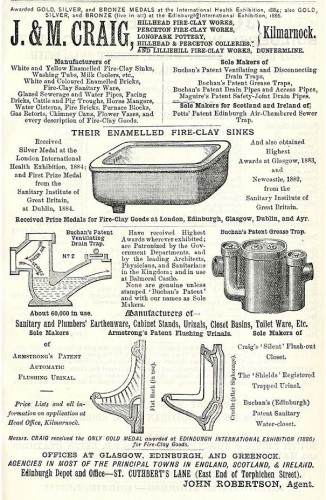 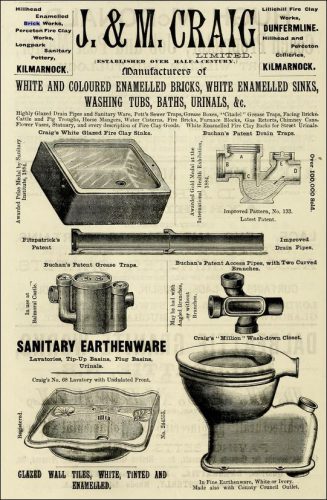 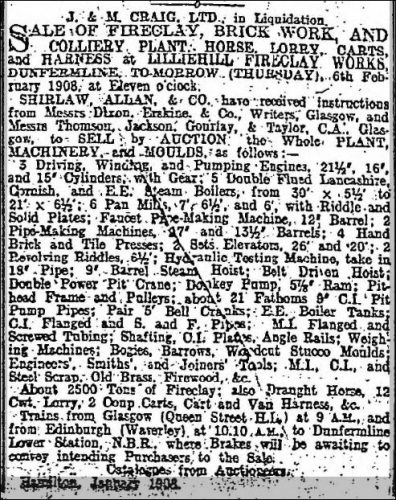 1914 – Kenneth W Sanderson states that the works were disused by this date.

1945 – Some building bricks may have been produced after this date. 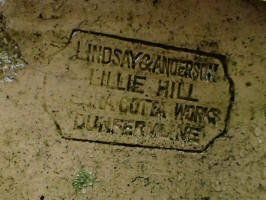 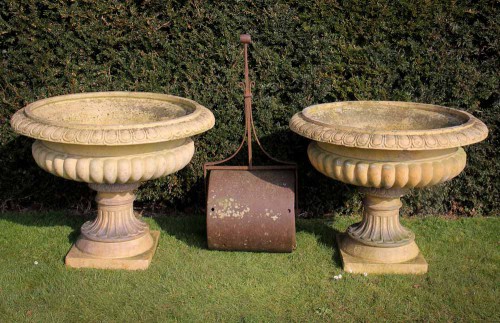 Lot Description  57in. (144.8cm.) high Together with a terracotta pedestal, with impressed stamp Lilliehill Tewrracotta Works, Dunfermline.­­ 19½in. (49.5cm.) high; the figure with pedestal ­­ 76½in. (194.3cm.) overall (2) Special Notice No VAT will be charged on the hammer price, but VAT at 15% will be added to the buyer’s premium which is invoiced on a VAT inclusive basis. This lot is subject to storage and collection charges. **For Furniture and Decorative Objects, storage charges commence 7 days from sale. Please contact the department for further details.** Lot Notes A pair of pedestals of the same design, stamped by J.M.Craig. Ltd and Lillie Hill, sold Christie’s The Seago Collection, 9th June 1999, lot 100. The Lillie Hill Fireclay Works, Townhill, Dunfermline, won the silver medal for fireclay goods from the Highland and Agricultural Society of Scotland in 1869. Craig bought them over in 1896.

Lot Description A pair of English stoneware pedestals By J & M. Craig Ltd, Kilmarnock, Circa 1900 Each with circular platform above an acanthus moulded rim, the cylindrical body with scrolling foliage, on a moulded spreading foot with palmettes, on a circular base inscribed J M. Craig Ltd and Lilliehill Terracotta Works, Dunfermline –  16 in. (42 cm.) wide; 19 in. (50 cm.) high (2) Lot Notes Established in 1831, the Craig factory became the largest firebrick ­maker in Scotland by 1865. The Lilliehill Fireclay Works, Townhill, Dunfermline, were also producing firebricks prior to 1869, the year they won the silver medal for fireclay goods from the Highland and Agricultural Society of Scotland. Craig bought them over in 1896 when the company was incorporated as J. & M. Craig Ltd. The factory ceased in 1914. 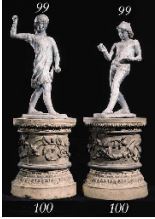 Below – A “Rustic” British Stoneware Plant Stand Naturalistically Modeled as a Tree Trunk, Circa 1880. – Source

This triangular plant stand is modelled naturalistically as a tree trunk with four truncated branches designed for containing potted plants.  The modelling of its bark is extremely similar to that of an English chair stamped, ‘Lindsay & Anderson, Lillie Hill, Terracotta Works, Dunfermline’  Dimensions: 17 1/2 in H x 17 in W (44.5 cm x 43.2 cm) 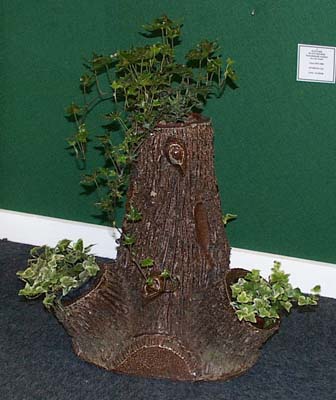 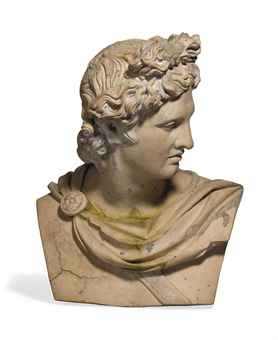