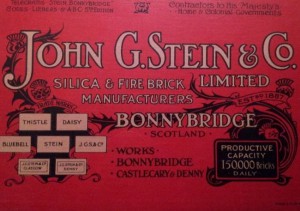 The photographs and information below were forwarded by John Dunlop. I am unaware of the date of the publication. 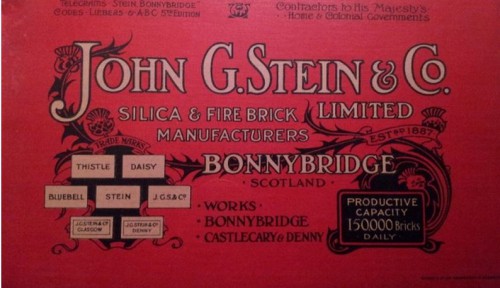 Below is a diagram of a “mixed feed kiln with restricted arch”. Stein has added a list of his refractory bricks and their optimum position within the kiln.  The list also includes the best cement to be used too.  See the attached invoice list which details some of the products. 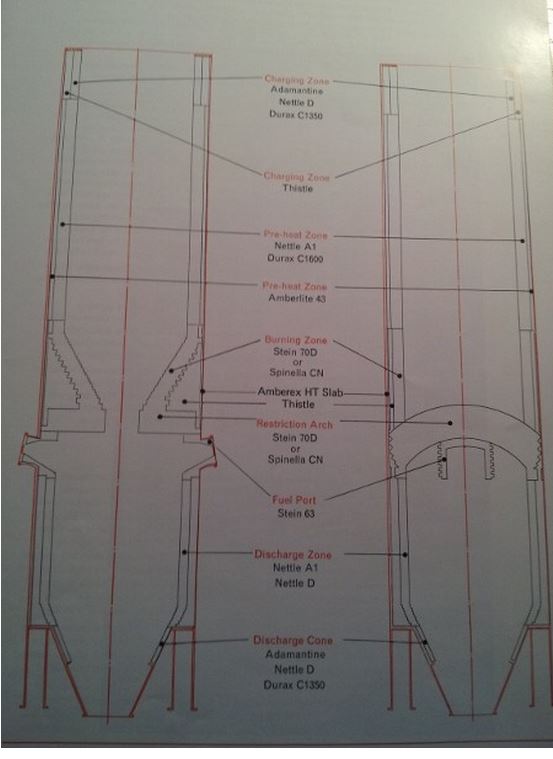 Charging Zone – In this section of the kiln, extending down about ten feet from the top, the lining is subjected to severe impact and abrasion from the incoming stone as it descends into the shaft.  The temperature in this zone may reach a maximum of 500 C., as the materials are being heated by the gases resulting from fuel combustion and stone calcination.  As a result, a lining is required in which refractoriness is only if secondary importance compared with its abrasion resistance and our recommended grade is ADAMANTINE.

Adamantine is very rough and abrasion-resistant firebrick produced from 25% alumina clays and designed for use at temperatures up to 1100 C. Due to its mineral composition it is particularly resistant to potash salts and is successfully used in rotary kiln processes where alkali deposition may be a problem.

In applications where burning conditions are considered to be severe and thermal spalling, due to the induction of wet stone or high burning temperatures, is a possibility, a higher grade firebrick is suggested, NETTLE D.  This is a 42% alumina firebrick which combines high refractoriness with good dimensional stability at high temperatures.  Its chemical composition is controlled to give a low content of fluxing impurities resulting in increased resistance to vitrification and hence high spalling resistance.

Pre Heat Zone – The calcination of the stone commences in this zone where temperatures in the region of 500 C to 700 C may be expected.  In some kilns, however, due to difficulties in controlling the burning conditions, the zone is subjected to wide temperature variations.  These are usually caused when the flame and the hot gasses are channelled through restricted passageways within the charge and between the lining and the raw material.  The result is a “blow torch” effect with extremely high localised temperatures.  Abrasion resistance is still of major importance and for kilns operating under carefully controlled conditions, any spalling tendencies are well within the capabilities of a high-grade firebrick.  For such applications, NETTLE A1 is considered to be of the most suitable grade.

This is a general-purpose 42% alumina firebrick of high refractoriness and good abrasion resistance at working temperatures.

In kilns where there is a possibility of temperature variations and burning conditions are generally more severe, the NETTLE D grade with improved strength is the recommended refractory.

Burning Zone – The most severe conditions in the lime burning process are encountered in the Burning Zone or  Calcining Zone where the possibility of ‘blow torch’ effects could raise the temperature of the material to values in excess of 1350c in localised areas. The conditions, therefore, require a refractory lining which has a combination of the following properties.

In the case of alumina materials, the reaction is dependant on the quantities of the ‘glass’ in the refractory at a given temperature. This is controlled firstly by the impurities in the refractory raw materials and secondly by their firing temperatures. The lime is taken into solution by the alumino – silicate matrix with the resultant formation of low melting, compounds containing anorthite and gehlenite. As a general rule, 42% alumina bricks are chemically resistant to lime in temperatures of up to about 1200c but above this temperature, large quantities of low viscosity liquids are produced which have a slagging effect on the refractory surface. Reactions with higher alumina materials lead to the production of lime-rich liquids at slightly higher temperatures but the quality of 70/80% alumina grades limits their use to temperatures of about 1350c.

Basic refractories such as magnesite/ chrome grades show more resistance to attack by lime. The lime initially attacks the magnesium silicate bonding media to form a complex lime-rich liquid. This, in turn, turns the chrome grains of the refractory into solution. However the initial liquid formed is highly viscous and as a result, any further reaction with the chrome grains is slow and only takes place to any extent at temperatures above 1450c. Even at these temperatures, the liquid is highly viscous and disintegration of the refractory is not evident. The rate of attack by lime on magnesite refractories is very slow, but due to problems regarding thermal conductivity and better spalling resistance of magnesite/chrome grades are more suitable for the lime burning process, where the burning temperatures make the reaction with lime insignificant.

Burning Zone Refractories – In kilns where burning conditions are controlled and generally considered to be relatively easy, a high alumina material may be successfully used throughout the zone. The most suitable grade in such cases is Stein 70D.

Stein 70D is a high alumina refractory designed to give an improved density which is reflected in its excellent resistance to abrasion. The brick is manufactured from high purity materials, resulting in a high refractoriness and resistance to chemical attack, coupled with a carefully selected grain structure to give increased ability to withstand thermal shock.

In kilns operating under more severe burning conditions where temperatures increase the possibility of a chemical attack, Spinella CN is considered to be the most suitable grade. This is a magnesite/chrome refractory specially developed for use in lime and cement kilns where abrasion resistance and the ability to withstand the chemical reaction with lime are of primary importance. The brick has a high mechanical strength and toughness coupled with a good spalling resistance for a basic refractory material. It has been used successfully in vertical lime kilns for several years and is now giving improved lining life and considerable savings due to reduced shutdown times.

Discharge Zone – This section of the kiln is not influenced by any high-temperature conditions, as the stone leaving the burning zone at about 1000c is cooled by air drawn in at the kiln exit. However, the refractory lining is subject to considerable abrasion from descending stone and also fluctuations in temperature from the effects of the induced cold air during drawing of the lime. As a result, the refractory requirements are adequately covered by a 42% alumina firebrick and Nettle A1 is our recommended product.

Discharge cone – general operating conditions here are to the discharge zone, but the taper of the lining in this section of many kilns, exaggerates the abrasive action of the stone. For normal operating conditions, the very tough Adamantine grade is recommended and where temperature fluctuations may lead to spalling problems, the greater thermal shock resistance of the Nettle D would be recommended.

Where problems of abrasion require a thick working lining, a firebrick backing would be necessary to maintain a reasonably low hot face temperature. For this application, we would recommend our Thistle grade of firebrick. This is a 37% alumina, general-purpose firebrick used widely in all sections of the industry for both hot face and backing application. Its properties of strength, thermal stability and refractoriness are more than adequate for lime kiln linings.

In sections of the kiln where reduced abrasion permits the use of a thinner hot face lining, considerable economies can be made by using an insulating brick backing in Amberlite 43. This is a diatomaceous insulating refractory with high strength and good thermal insulating properties and is widely used as a backing lining.

For kilns with a basic burning zone lining of Spinella CN, the high thermal conductivity of this grade compared with high alumina refractories makes the use of an insulating backing essential to maintain the shell temperature at an acceptable level. By using a composite backing of Thistle firebrick and Amberex HT Slab, considerable economies can be made in heat loss from the cold face, whilst any increase in the hot face temperature can be accommodated due to the low chemical reactivity of Spinella CN with lime bearing materials.

Amberex HT Slab is a calcium silicate-based insulating material suitable for backing applications up to temperatures of 1000C. The material is especially suitable for use in positions adjacent to the steel wall shell where any expansion of the hot face lining may be taken up due to the compressible nature of the insulating slab.

From the foregoing comments, it is evident that only general recommendations for backing lining can be made, and each process must be carefully studied with reference to: