The Calder Fireclay Company was founded in 1880 by Robert Fleming & Co with a brickworks at Armadale. The Company was reconstructed in 1892 as the Calder Fireclay Co and passed into the control of the Paine family who erected a brickworks 2 miles south-east of Airdrie near the Carnbroe Iron Works. They also worked the fireclay and had a brickworks at Hareshaw near Shotts from 1907 to 1919. James Paine joined his father in the business after WW1. Their firebricks, branded Calder, won an excellent reputation for service in blast furnaces.  The Calder works used 9 Newcastle type kilns with about a 50-ton capacity each. They used a large number of hand moulders as a 1925 catalogue claims all firebricks were handmade. This lack of brick manufacturing machines and the smallness of the Company made it difficult to compete in the 1930’s so an agreement was signed with the Bonnybridge Silica Company to merge on 18/01/1936. Calder owned a mineral field of about 30 acres at Chapelhall, 2 miles south-east of Airdrie with easy access to a railway siding. The combined company decided to build modern works on this site. By March 1937 the Bonnybridge and Calder Works were reported at full production and the new Chapelhall Works had started to produce saleable fire bricks.  The original intention to close the Calder Works was postponed. The Calder brand continued after the merger with the Calder Fireclay Company and was used mainly for bricks made at the Chapelhill Works.  Octo and Novo brands were introduced in the 1960s for high alumina bricks. Source Kenneth W Sanderson.

13/04/1907 – Airdrie and Coatbridge Advertiser – Contractor (certified), wanted to open up a fireclay mine at Hareshaw Brickworks near Salsburgh. Apply in the first instance to Calder Fireclay Company, Calder Brickworks, Coatbridge. 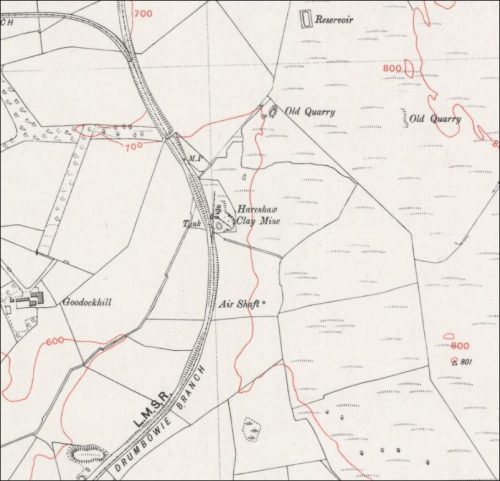 Below – Information – British Geological Survey. Fireclay from the Hareshaw Fireclay, Calder Fireclay Company, Lanarkshire
Black carbonaceous waxy fireclay from the Hareshaw Fireclay, Calder Fireclay Company. The specimen was donated to the Geological Survey of Great Britain in 1916. Scotland has large resources of fireclay that include some of the best high alumina fireclays in Britain.
Fireclays are restricted to the Passage Group and the lower part of the Coal Measures. Most recent production has come from the Central Coalfield, though fireclays were worked in
Ayrshire and reserves are known in the Douglas Coalfield.