30/01/1846 – Montrose, Arbroath and Brechin Review – Bervie. We have before had much pleasure in noticing different instances of public spirit displayed by Mr Farqnhar of Hallgreen in this quarter; and in these days, when so much is required to be done, and really is being done, for agriculture, it particularly gratifying to learn that that gentleman is immediately to erect tilework at Gourdon. Such work was much wanted in the district, as fully shown by the fact that orders for upwards of a million of drain tiles were received within very few hours of its becoming known. We learn that Mr Dickson of Laurencekirk is to take charge of the work: and improvers may rely on having it in their power to procure a supply of tiles of the most recent and approved description.

25/05/1849 – Montrose Standard – Gourdon. On the night of Wednesday week, some evil-disposed person or persons entered the premises occupied the tilework, and destroyed a great number of newly made tiles and damaged a machine used in the work. We sincerely trust that such villainous conduct will not long go unpunished. A reward of one guinea has been offered for such information as may lead to the capture of those who have perpetrated such a depredation.

25/04/1851 – Montrose, Arbroath and Brechin Review – New Traffic – The railway has confessedly damaged and cut up some branches of the coasting trade, but it has opened up quite a new one – the conveyance hither of the manufacture of the Hallgreen Tileworks from Gourdon. A small vessel has been employed to convey the pipes thence to the railway terminus here (Montrose) and strange to say, a portion of its cargoes has already found its way northward to the parishes of Laurencekirk and Arbuthnott, or, after performing a journey of 25 miles by water and rail, to within 6 or 7 miles of the soil whence the tiles were formed.

30/09/1853 – Montrose, Arbroath and Brechin Review – For sale a very superior condensing steam engine of 14 horsepower. The engine will be seen at work at the tilework, Gourdon by Bervie. Apply to Mr Dickson, Laurencekirk.

11/08/1854 – Montrose, Arbroath and Brechin Review – For sale at Gourdon Tilework. Two pipe and tile machines, one by Scraggs and the other by Finlayson; a pug mill; a quantity of dies and moulds; kiln furnaces; about 20,000 feet of ¾ shelving and a great variety of articles in general use at tileworks. Apply to George Matheson at the work or to Mr Dickson, Laurencekirk.

Below – 1864 – Hallgreen Farm where the tileworks are assumed to have been sited but they no longer appear to be in use. 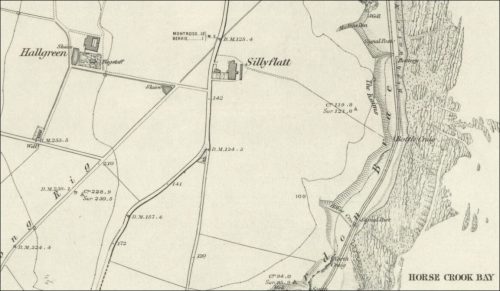