The Aldmere lime kiln is situated beside the Highlands District offices, off Millstream Road, District of Highlands, Vancouver Island, B. C.

Gartcraig Bricks at the Aldermere Lime Kiln. Around the site of the Highlands lime kiln, and among the rubble, can be found yellow firebricks. Probably from the collapsed chimney of the kiln, they can be identified, and add further information about the kiln and its possible dates of use.

Below – A broken brick with the partial embossed name “GARTCRAIG” from the Aldermere (Highlands) limekiln. Photographed September 1, 2016 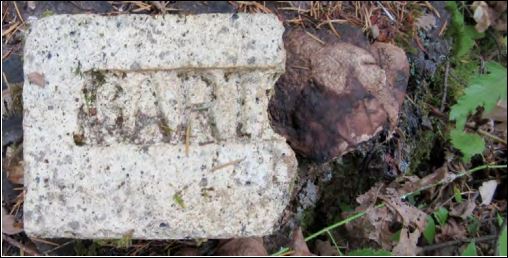 In 1906, the Robert Ward Co. imported a large quantity of ‘Gartcraig’ firebricks and Fireclay from Scotland to the Victoria market. He sold this shipment over a period of
around six months.

It is likely that the ‘Gartcraig’ bricks at the Aldermere (Highlands) limekiln came from this shipment. Although the Gartcraig Fireclay Company existed from 1876 to c1927, the only mention in the Colonist of anyone importing these bricks from Scotland dates from 1906. It is likely that the kiln was refurbished at that time, given the local availability of the bricks, though the kiln appears to have been abandoned before WW I.

Although it is possible that the bricks had been imported at the time of the construction of the Highlands kiln(s) in 1886 – as the bricks were being manufactured in Scotland as
early as 1876 – it is more likely they date from c1906. 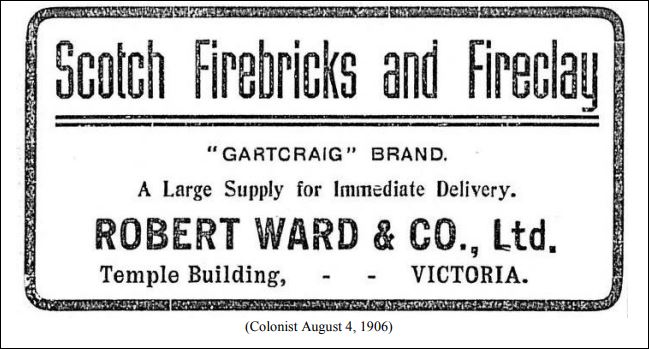