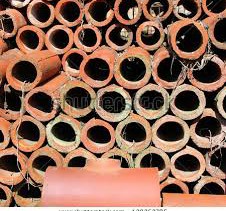 This is a cracking read.

The Museum of English Rural Life has a substantial collection of field drainage tiles and pipes, donated by the Ministry of Agriculture Fisheries and Food Land Drainage and Water Supplies Division. The following text comes from the original catalogue to the collection. Since 1940 the Ministry, through the County Committees, has carried out a considerable amount of under drainage work on behalf of farmers, and it is natural that a great many old drainage tiles of various shapes have been dug out. Some of the more interesting examples have been collected by Headquarters and are described and illustrated in this leaflet. The period when clayware field drains came into use is obscure. The original common form of under drainage channel was clearly the trench, part-filled with faggots or stones and as late as the middle of the 19th century, some drainage experts were still advocating the use of this type of channel in preference to the clayware drain.

On the other hand, S. Johnson reporting on the ‘Elkington’ system of drainage about 1800, and other writings of that period, indicate that the clayware drain was in relatively common use by that date. Nor is it possible to allocate specific dates to a pipe by reason of its design or shape. The manufacture of clayware field drains was mostly a matter for the local or estate brickyards
and developments and improvements occurred locally rather than nationally. The only approach to possible dating of pipes are those stamped with the word ‘DRAIN’. In 1784 a tax was imposed on bricks and other clayware building material, and field drains were included. In 1826 after a great deal of protest and pressure, field drains were exempted from tax provided they had the word ‘drain’ impressed. In 1850 the tax was abolished altogether. Hence this type of drain dates from 1826 to 1850.

Although it is not possible to allocate definite dates to different designs of drains, it is possible to trace an overall pattern of development in design. The old stone filled trenches obviously tended to become overloaded in periods of heavy rain particularly when the drains were becoming old, and the first development was to copy the old bush drains and create an open space below the stones at the bottom of the trench through which the water could flow more freely. This was done by wedging flat slabs of baked clay (roofing tiles probably in the early days) above the trench bottom to support the stones. Hence the possible origin of the name tile drain. Later the flat slabs were used to form sides and bottom to the channel in the cross-sectional shape of an inverted V or diamond.
It logically followed that somebody eventually bent the flat slab into a U shape before burning and laid it, inverted on the floor of the trench, thereby avoiding having to build the channel in
flat slabs. Hence the horseshoe drain. A parallel development was the block of clay with a semi-circular indentation on one side – the draining brick. When the soil floor of the trench became saturated these tiles, particularly the slab horseshoe would tend to sink into the floor due to the weight above. Various attempts were made to overcome this, either by using an inverted tile or brick to form a base and superimposing another to form a roof, or by adding feet to the horseshoe tile, or by resting the tile on a flat base. Other alternatives were flat slabs bent to D or O shapes.
With the invention and use of the extrusion method of brick making it became possible to form complete drains in one piece, and it is natural that first extruded pipes should be in the form of a horseshoe with a flat base, i.e. a D shape. With the passing of time, the centre opening became circular but the flat base remained. Ultimately, the width of the base was gradually reduced until the present round pipe was evolved. 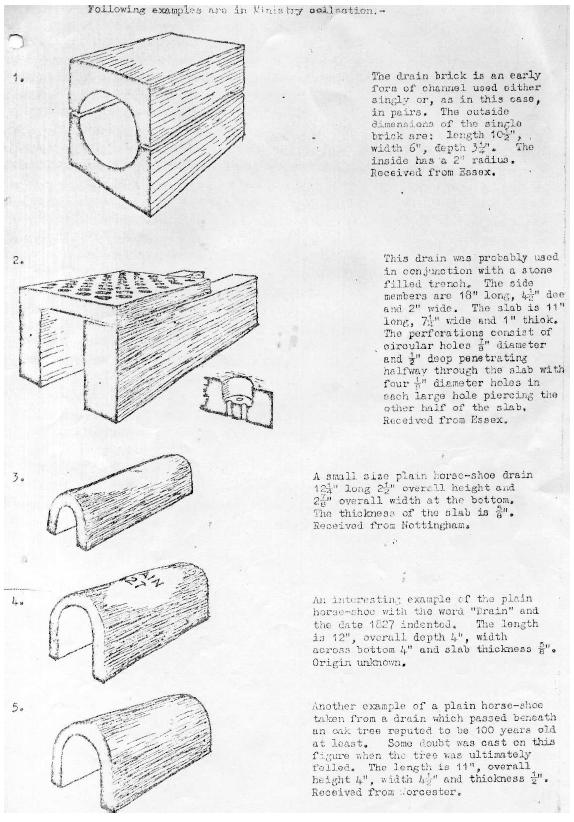 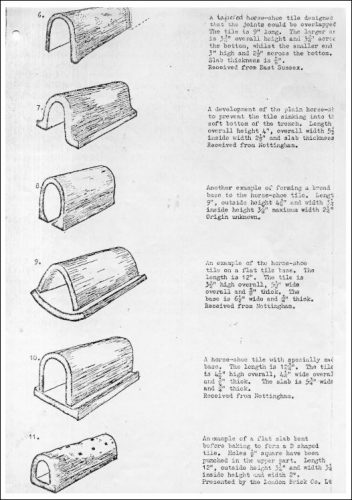 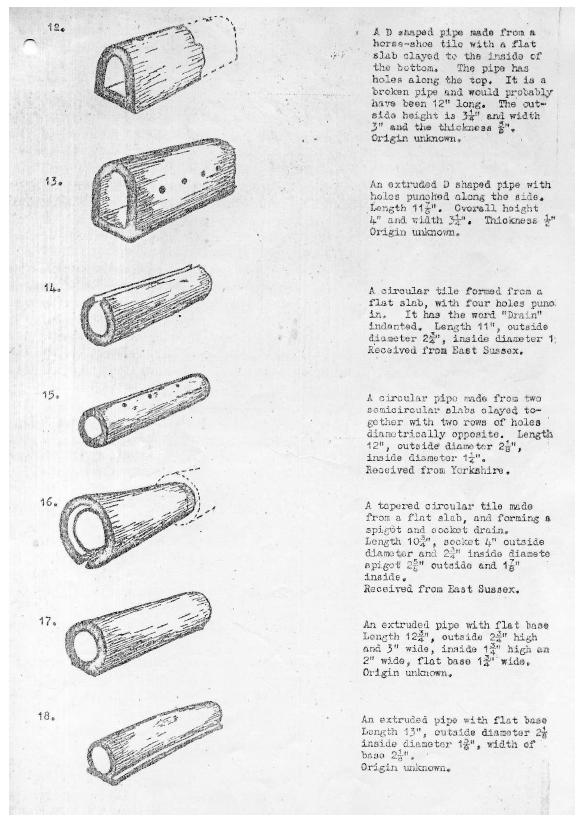 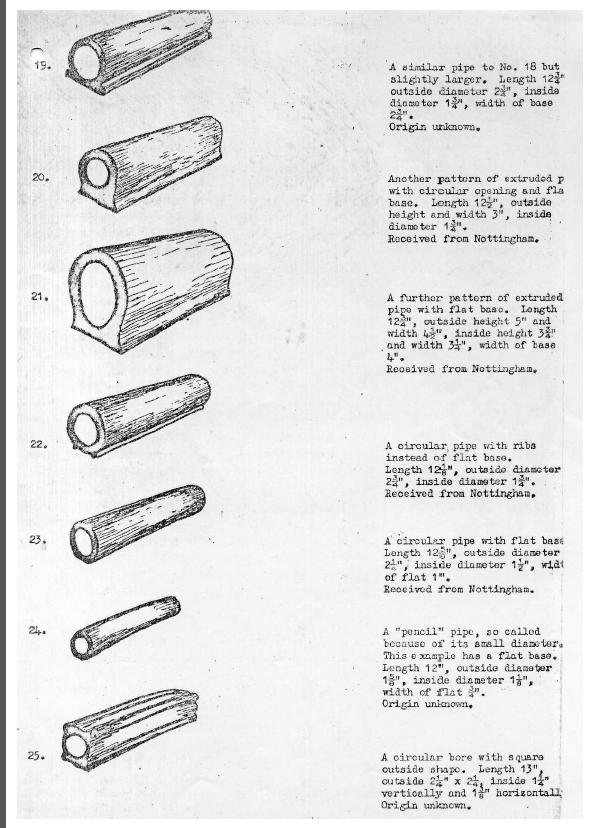 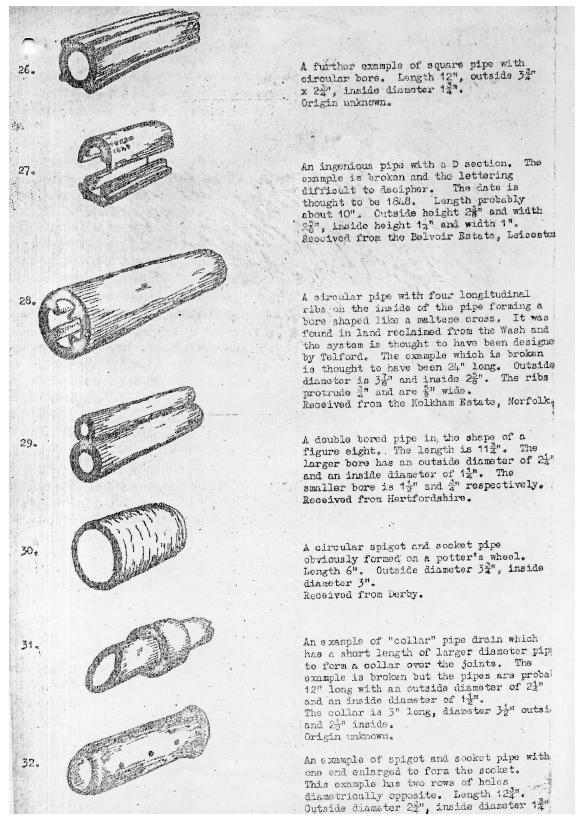 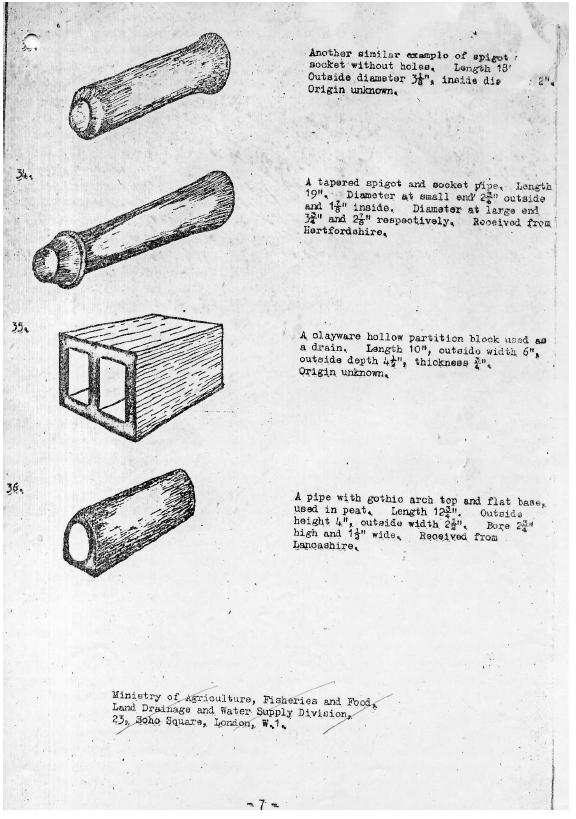