07/08/1848 – Caledonian Mercury – Highland and Agricultural Show for the best collection of drain tiles and pipes – the premium of 4 sovereigns to James Wallace, Eaglescarnie Tileworks, Haddington.

11/12/1848 – Caledonian Mercury  – Highland and Agricultural Society of Scotland. The society’s first monthly meeting of the season … The Secretary read a letter from Mr Wallace, tile manufacturer, Eaglescarnie, East Lothian, relative to pipe tiles, the ends of which were cut in such a form that they fit easily into each other, and are so connected that they cannot shift after being laid in the drain. They were intended to obviate the necessity of using collars when the bottom of the drain is soft. Specimens of the pipes and one of the cutting instruments were exhibited. The peculiarity of the latter consists in having two wires fixed diametrically across an iron tube, of a diameter that receives the end of the pipe which is to be shaped – one of these is the cutter, and the other the director of the cut. The latter being constrained to follow the form and direction of certain slits cut in the iron tube exact counterparts of the form intended to be given to the end of the pipe. The wires are attached to two external arms of an arbor that passes along the centre of the tube and is turned by a gimlet handle. The Secretary, in laying these before the meeting, expressed an apprehension that Mr Wallace had, unconsciously perhaps, interfered with Mr Smith of Deanston’s patent, applicable to a similar process.  Mr Slight said he considered, that in principle the construction of the cutting machine was exactly the same as in Mr Smith’s patent, the result only differing in producing a form, which, in mechanical phraseology, was known as a clutch joint, whereas Mr Smith’s had curved lobes. He, therefore, feared that this was an encroachment on Mr Smith’s patent and until that point was ascertained, he doubted whether Mr Wallace should be advised to proceed further. Professor Low doubted whether the tiles exhibited were an infringement of Mr Smith’s patent, and he thought that this opinion should not go forth as one entertained by the present meeting. The fashioning of the ends of the tile pipes into different forms could scarcely be the subject of a patent. The patent could only apply to the particular mode or kind of machinery employed for performing such operations … 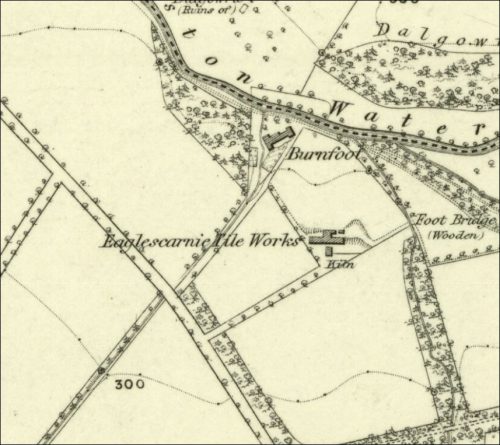 1853 – 1854 – ScotlandsPlaces – A tile manufactory chiefly for making the tiles used for drainage; the property of Gen: [General] Sir P. Stewart of Eaglescarnie.