These drains and collars were found by Ian Suddaby in Fife near to Inverkeithing.

They show evidence of snap lines. At least 3 of these pipes would have been extruded at the same time from the pipe making machine. They would be connected by a thin strip of clay and fired together. After firing they would be snapped apart. The collars also show transverse snap lines at the base of each section. It appears these would be extruded as a whole tile and partially divided up and cut through with a wire leaving them only connected at the base. They would then also be fired and snapped apart when required.

Ian states  – Digging trenches in sunny Fifeshire today and the field drains were the only things of interest. On the one hand, there are the drains filled with millions of small stones, laboriously cleared from the field which nevertheless still contain occasional pieces of pantile and broken bricks.
On the other, there are these small diameter drains with the rarely found collars, between 14½” and 15″ long and internally about 2″ by 1½. All of the four pipes in this bit of drain had the ‘snap lines’ on both sides and must, therefore, have been extruded three abreast at least. However, with three abreast, only one in three has snap lines on both sides so the chances are they were extruded in much greater numbers. Extruding in eights gives six of the eight two snap lines and the chances of finding four the same in a short length of the drain are increased … So if the collars were originally, say, 15″ long pipes and each made 5 of the 3″ collars, there should be 2 of the 5 that have one of the ends cut right through and not snapped off as they would be part of the original pipe  Both pipes and collars could have been brought to the field as an equivalent of an Airfix kit and reduced to individual parts as needed. That would have saved a lot of handling”

Below – 2 pipes and 3 collars laid out as they would have been in the drain trench. 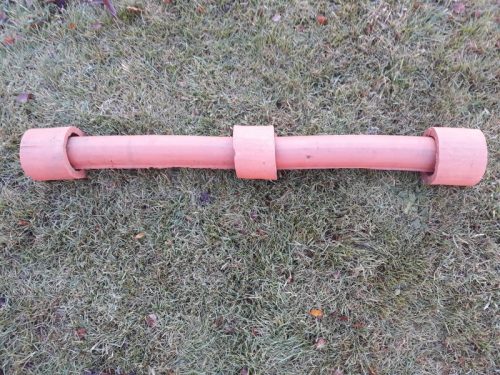 Below – Collar showing the snap line at the base of the tile. 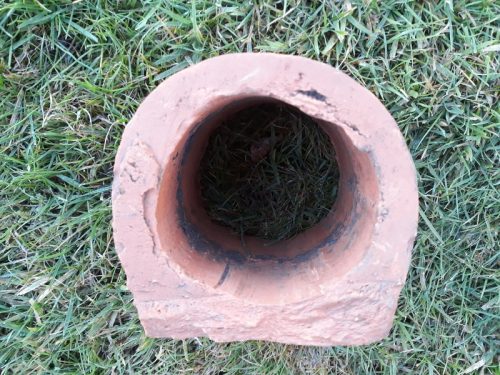 Below – A view showing tiles with snap lines. They would have been joined at this point during firing. 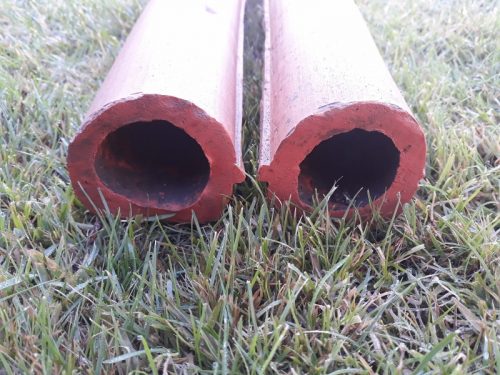 Below – Tile showing a snap line to the left-hand side. 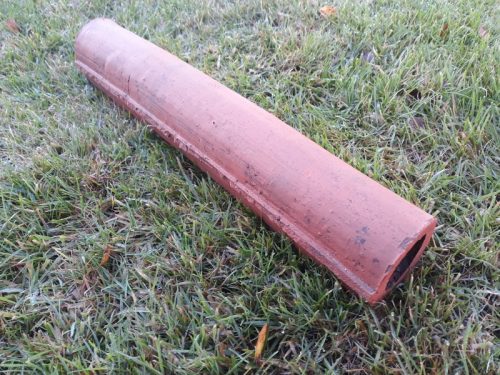 Below – A tile with no snap line to the left-hand side. There is one on the other side so this tile was on the outside of a line of extruded tiles as they were pushed from the tile making machine. 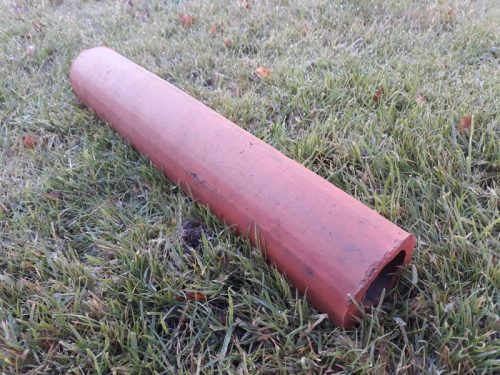