16/07/1864 – Hamilton Advertiser – Alexander Gibson, auctioneer, Biggar has been appointed an agent for the Coltness Brick and Tile Works from whom prices and all particulars may be obtained.

16/07/1869 – Glasgow Herald – Coltness Brick and Tile Works – In consequence of the death of James Smith, one of the partners in the above firm, the work will be in future carried on, under its former designation, for behoof of Mrs Smith, widow of the deceased James Smith and James Lochhead the surviving partner of the old firm of James Smith and Co.

Below – 22/11/1873 – Hamilton Advertiser – Coltness Brick and Tile Works being sold on the instruction of Messrs James Smith and Company … Stewart Street, Carluke. 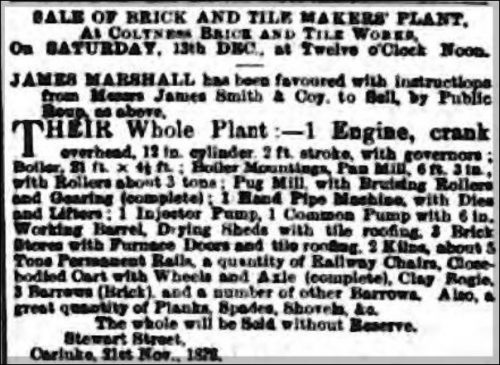 19/09/1891 – Lanarkshire Upper Ward Examiner  – The telephone at collieries – Coltness Iron Company are carrying through a connection by means of the telephone between their works at Coltness and their brickworks at Hallcraig. Poles have been erected along the old road between Carluke and Wishaw and branching off at a point to go through the lands of the general scheme by which the Coltness Iron Company are making their connection by means of the telephone with their principle pits and works throughout Lanarkshire.