Cardross Brickworks and Quarry, Uphall, West Lothian. Can anyone pinpoint these on a map?

01/07/1890 – The Scotsman – Joint-stock companies in Scotland – John McKnight & Co, Binny Quarry, Uphall, Linlithgowshire to acquire the business of McKnight and Marshall, Cardross Brickworks and Binny Brickworks and Quarry. Capital £12,000 in 12,000 shares of £1.

22/12/1891 – Glasgow Herald – Montgomerie v John McKnight and Co Limited – Daniel Montgomerie, 16 Stankard’s Row, Uphall sued John McKnight & Co., Limited, Binny Quarry, Uphall. Pursuer sued for £560, or £78 under the Employers Liability Act, for the death of his daughter Mary Jane, who entered the defender’s employment in Cardross Brick Works,  near Uphall, On 25th May last, and was accidentally killed on 2nd June. He stated that after a few days his daughter was put to work at a moulding machine her duty being to clear away the clay droppings as they fell; that her head was caught by a revolving wheel and crushed against a fixed iron shaft or beam; and that she sustained injuries of which she died a few minutes afterwards. It was averred that the machine was defective, and the mode of working it unnecessarily and unreasonably dangerous. Defenders stated that the girl, unknown to them and Contrary to the terms of her engagement, exchanged places with another girl. She had no business to be there, her proper place being at the railway siding packing bricks. The wheel mentioned by the pursuer revolved very slowly, about one revolution a minute and, without great carelessness, it was impossible that anyone could have been injured by it. Without admitting liability, they tendered £50, with expenses. The evidence had not concluded when the Court rose for the day.

17/06/1892 – Glasgow Herald – Binny Quarry and Brickworks – For sale by public roup unless previously disposed of by private bargain, within Dowalss Rooms, 18 George Street, Edinburgh on 21/06/1892 at 2 o’clock. The Quarry and Brickworks of Binny and Cardross carried on by John McKnight & Company Limited now in liquidation, as follows:-

The brick-making material is of excellent quality and Binny stone has long held the first place for monumental and other purposes. The purchaser will be subject to the approval of the landlords …

Below – 1895 – Binny Brickworks – there is also reference to an ‘old brickworks’ at Carledubs just south of Ecclesmachan and north of Uphall. These may have been the Cardross Brickworks. The works are not referenced on the 1854  or  1913 OS Maps. 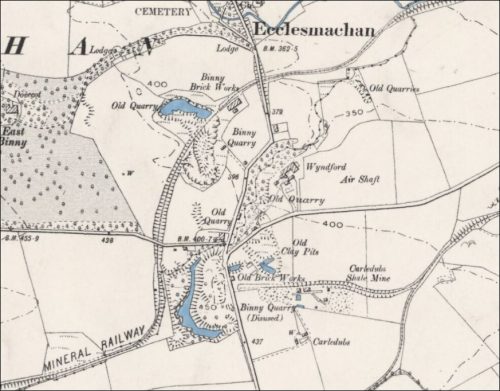