18/07/1902 – Ardrossan and Saltcoats Herald – … In the other action Alexander Kennedy, brickmaker, Lugton sued John Reid & Co., brick makers for compensation at the rate of 8s per week in respect of injuries sustained by him while in the defender’s employment on 25th November 1901. The pursuer had been injured after working in the defender’s employment for six hours, and at the time of the accident had only earned 2s. The question raised was whether the compensation should be 50 per cent, of the weekly wage at which he had been engaged or whether it should be 50 per cent of his actual earnings at the time of the accident. Following a recent decision by the Court of Session, the Sheriff awarded compensation at the rate of one shilling per week.

15/09/1905 – Barrhead News – New Industry – The Caldwell branch of Messrs Reid & Co.’s Lugton and Caldwell Brickworks was opened on Saturday last. By the kind invitation of the firm a goodly company of gentlemen interested attended the opening ceremony, and were afforded the opportunity of inspecting the new work, and witnessing the setting off of the machinery; also noting the method and production of the first bricks to be manufactured by the firm at their new works. The works are situated about half a mile from Caldwell Station of the Glasgow, Barrhead and Kilmarnock Joint Railway, having a direct railway connection, and they are fitted up in the most up to date principle. The motive power is provided by a double flued Lancashire boiler, working at 110lbs pressure to a compound tandem non condensing engine supplied by Messrs Thomas C. Fawcett, Ltd., Whitehouse Engine Works, Leeds. The brick machine is also made by this same firm, being one of their ” Duplex ” machines, capable of turning out 1200 bricks per hour. The kilns are also of the most modern principle. Altogether the works are a complete production of all that is necessary for the manufacturing of bricks of a high-class nature and being so centrally situated, should prove a boon to the building trade. 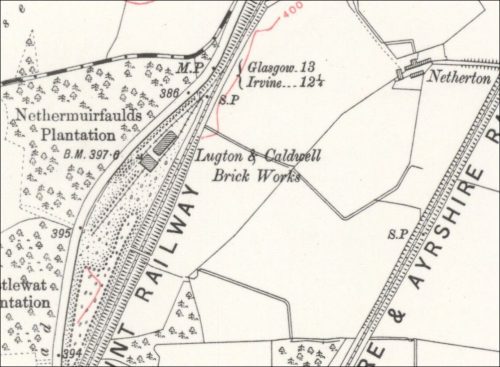 10/08/1921 – Dundee Evening Telegraph – Housing difficulty – Cost of bricks from the continent – Mr James M. Dow, the housing architect for the Upper District of Renfrewshire in his report for the month of July submitted to the Housing Committee, observes that with the exception of the main sewer, no progress was made with the houses in Newton Mearns during the month. The Department of Building Materials Supply has been unable to secure bricks and the Board of Health are unwilling to agree to the high rates being asked by manufacturers for bricks obtained in the open market. “I have obtained consent to the purchase of 10,000 bricks from Caldwell brickworks the rate of 120s per 1000, but I’m obtaining quotations from other sources. Large supplies of Continental bricks will shortly be available, and I have secured an option over 75,000 of the first shipment at a price of 105s per 1000 f.o.r. at Grangemouth. ” I fear, however, that plus the railway carriage the bricks will cost more than if obtained locally and I am endeavouring to arrange through the Board for the bricks being discharged in Glasgow or failing that, for a supply of local bricks being sanctioned. 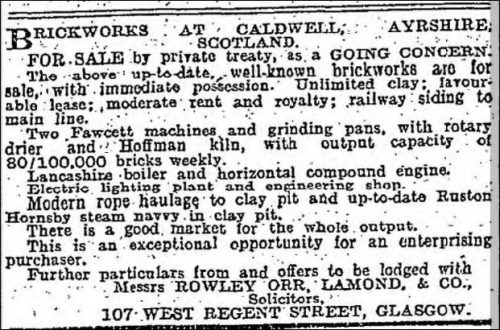 Tagged with: Lugton and Caldwell, Reid and Company