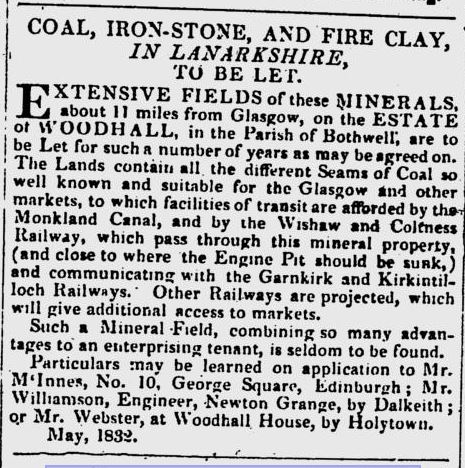 26/11/1853 – The Scotsman – Land and minerals on the Estate of Woodhall, Parish of Bothwell for sale … There are extensive and valuable freestone quarries on the estate and an abundance of clay, well suited for the manufacture of brick and tiles, both of which are in great demand in the neighbourhood … 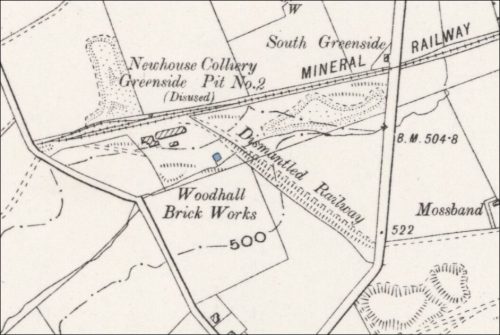 22/03/1899 – Glasgow Herald – The subscriber Thomas Muir, baker, Newarthill retired from business carried on by the whole subscribers under the name of the Woodhall Brickmaking Company, Woodhall Brickworks, Newarthill, as at 31st December 1898 and ceased to have any interest in the said company as from that date. The business will be carried on under the name and style by the remaining partners, the subscribers James Stewart, Tuphall, Hamilton and William Ballantyne residing at Newarthill who will receive all monies due to and discharge all debts and obligations due by the said company. Thomas Muir. James Stewart and William Ballantyne …

22/07/1899 – Airdrie and Coatbridge Advertiser – Damages claimed for the loss of a finger. The first division ordered issued in an action by John Weir, brickworker, Newarthill against the Woodhall Brickmaking Company, Newarthill for £150 damages for personal injuries. The pursuer is sixteen years of age, and on 16th March last while working with the defenders at a revolving machine furnished with revolving knives his left hand was caught by one of the knives and the forefinger taken off at the middle joint. The pursuers deny fault or defect in the machinery and plead contributory negligence.

17/05/1901 – Hamilton Herald  – A young lad named Marshall McCulloch, a pony driver, residing at Co-operative Buildings, Newarthill met with an accident on Tuesday while at work in teh stable at Woodhall Brickworks, Newarthill belonging to United Collieries Co Ltd, by being kicked by a pony he was dressing. The injured lad was attended to by Dr Lithgow, Cleland, who found him suffering from a compound fracture of the lower jaw-bone and ordered his removal to the Royal Infirmary, Glasgow.