1803 – Hillcoat died. The business was taken over by his son and son in law. Roof and drain tile were the initial products.

1825 – 1826 – Alex Guthrie, Brick and Tile Manufacturer, West Bank, Portobello.  Mr Alexander Guthrie, at one time a clerk to the Court of Judiciary. He was also at one time a bookseller in Waterloo Place, Edinburgh, and being in good circumstances he made a considerable addition to Westbank House. After his death, the business was carried on, but with indifferent success, by his son, William Guthrie, who ultimately gave it up, and the works stood idle for some time.

Below – 13/04/1833 – Caledonian Mercury – West Bank Brick and Tile Works belonging to the late Mr Alex Guthrie to let. The Works are at least 30 years old at this time. 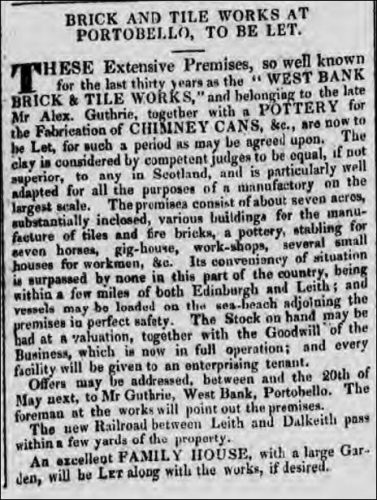 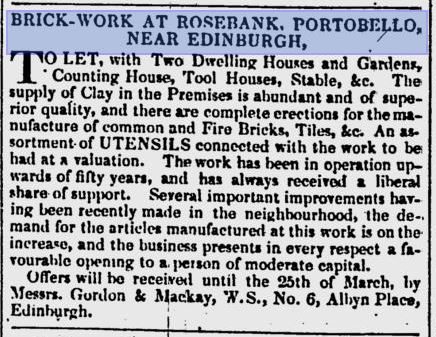 24/09/1842 – Caledonian Mercury – An article regarding some skullduggery by the Conservatives to obtain a majority of voters in the Edinburgh Leith area by creating fictitious votes…..In Portobello a few votes were attempted to be manufactured by Mr Miller of Craigintinny … But only 2 were allowed … Mr Miller’s agent and an advocate … The subjects on which the party claims consist of a tile shed for making tiles, part of West Bank Brick and Tile Works, said shed measuring in length 135 feet by 30 inches breadth … (30 ” breadth !!)

1847 – A lease of the place was acquired by Mr George Ingram who conducted it with great vigour till his death in 1867?  Mr Ingram, who belonged to Selkirk, where he was born in 1810, is described as ”a man of generous sympathies and superior intellectual endowments.” He was a teacher by profession, being a master in the Academy, Davie Street, Edinburgh, which he left in 1837 to be clerk to the Misses Creelman, the then lessees of the Abercom Brick Works, an office which he held for about ten years until he started for himself at Westbank. During this period, the building trade being brisk, and there being a large demand for bricks, the works were highly remunerative, and Mr Ingram amassed a considerable sum of money. On Ingram’s death, the works were carried on under the management of Mr William Hunter for behoof of his son, Alexander Ingram, and eventually on his own account. But a time of depression in the building trade having ensued, and prices not yielding a remunerative return, he renounced the lease of the place in 1880. After standing some years idle Westbank was re-opened by Mrs Brodie Sherriff from Dunbar in 1884. 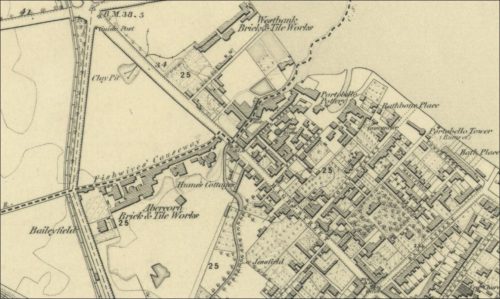 Below – 06/10/1859 – Southern Reporter – Delays in the transport of drain pipes from Ingram’s Tileworks, Portobello to the Borders. Railway at fault. 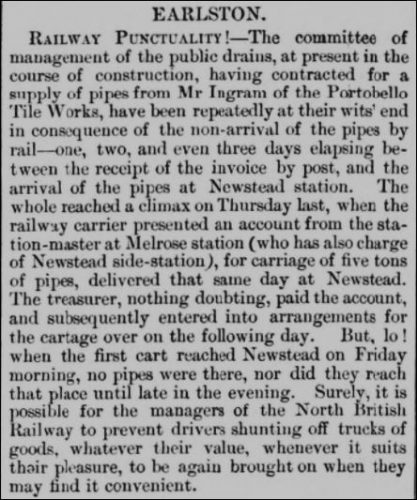 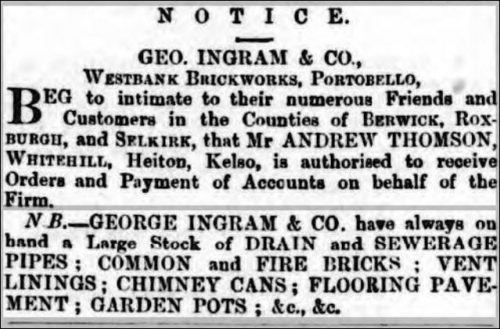 30/08/1873 – The Scotsman – Fatal accident at Portobello – Yesterday morning about ten o’clock, a young man named Thomas Brown was accidentally killed, at Messrs William Hunter & Co’s brick and tile works, West Bank. Brown was engaged in bringing out clay with a ballast waggon for the brick machine, and when near the tunnel under the turnpike road, he was suddenly caught by a passing waggon, and so severely crushed that he died within an hour and a half of the occurrence. Deceased was unmarried

26/06/1873 – Southern Reporter – Messrs William Hunter & Co, brick and tile manufacturers, Westbank, Portobello were charged with illegally employing three young persons under the age of eighteen without having previously entered their names and without having obtained surgical certificates. They pleaded guilty and were fined £6.

02/12/1879 – Edinburgh Evening News – Yesterday afternoon, a boy named William Matthew, about 9 years of age and residing with his parents at Mossbank, Portobello was drowned in an unused claypit near the Westbank Brickworks belonging to Messrs William Hunter & Co, Portobello … The boys were warned by the manager and the workmen in the brickfield during the day that the ice was in a dangerous state and advised to desist.

19/08/1880 – Edinburgh Evening News – Margaret Catlidge, aged 17, a worker at Messrs Hunter & Co’s Brickworks, Portobello and residing at  N0 4 Ramsay Lane had her left hand severely crushed by a brick stamp descending on it while engaged at the works, this forenoon about 11 o’clock. She is under treatment at the Edinburgh Royal Infirmary.

15/09/1885 – The Scotsman – Portobello Valuation Appeal Court – A valuation Appeal Court for the burgh of Portobello was held yesterday – Provost Christian presiding. Miss M.Brodie Sheriff (Sherriff) appealed against an entry of £160 as the assessable value of West Bank Brickwork. It appeared that the works were let for a period of ten years at a rent of £160, a special rent of £120 being charged this year on account of the tenant’s repairs. These were rendered necessary on account of the Works having been 2 years unoccupied. The assessor said the landlord had simply allowed £40 to be deducted from the rent. The appeal was dismissed. 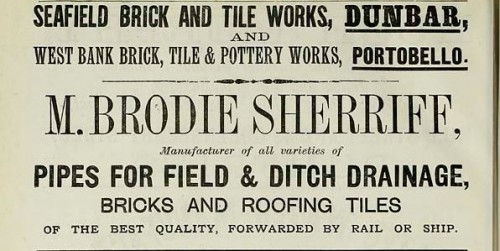 1890 – Peter Mitchell took over the firm – bricks, tiles, drain pipes and terracotta were all manufactured and  are developing the trade on the old lines, bricks, tiles, and drain pipes forming a prominent feature of their manufacture, while pottery ware for gardens, such as flower pots, vases, and ornamental jars in terra cotta are made in considerable quantity. The bricks, as in Abercom Works, are dried by steam undercover. The exhaust steam from the engine, which used to be blown into the air, being utilised for this purpose and in three days they are ready for the kiln instead of taking a month or so by the old process. The works are lighted by electricity, generated by an engine on the premises. Close upon a hundred men are employed. 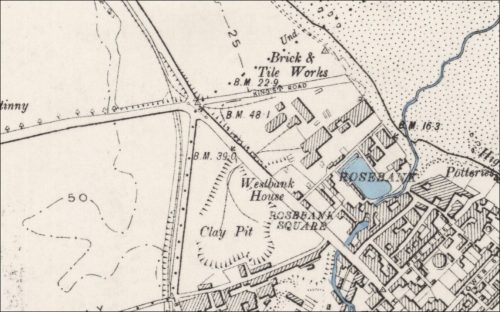 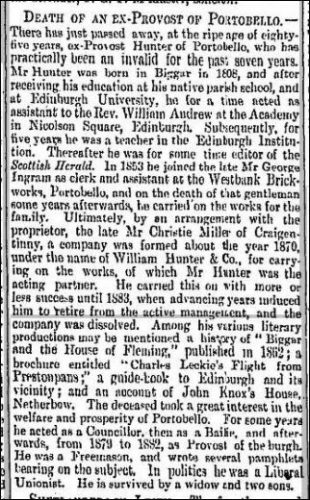 28/02/1896 – Glasgow Herald – In another case in the Valuation Court both the Assessor and Magistrates of Portobello scored.  The Magistrates at the local Court upheld Mr Smart’s decision, that the cost of the new Hoffman kiln for burning bricks which had been erected at Westbank should be treated as a consideration other than rent, and that he was entitled to include the amount of interest – 6 per cent. on it-in his estimate of the annual value of the property.  The proprietor and tenants did not think that it should be included in the valuation of the subjects, and accordingly got a case stated for the higher court.  In upholding the Assessor’s contention and the Magistrates’ decision, both Lord Kyllachy and Lord Moncrieff were very complimentary to the local Magistrates-and, of course, to the Town Clerk who would state the case for them.  Lord Kyllachy said they had taken the right view and expressed their judgement with great precision, while Lord Moncreiff’s observation was that the Magistrates had arrived at a sound decision.

Below – 1905 – Westbank Brick and Tile Works are situated at the top of the map and the new works are bottom left.  (Abercorn Brickworks are shown middle bottom). 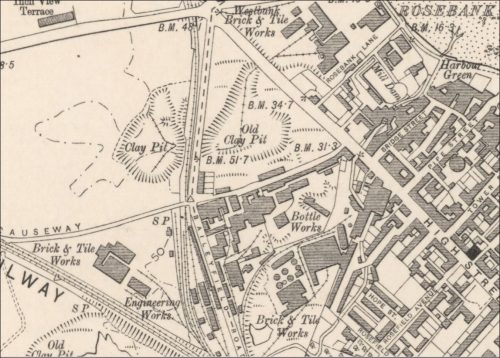 Below – 23/09/1905 – The Scotsman – Peter Mitchell & Sons are engaged in active preparations for the transference of their brick, tile and pottery business from West Bank Brick Works to a site on the Craigentinny Farm near Portobello Railway Station where eight acres will in a few months be covered by a new range of buildings and railway sidings. The site now to be deserted has been a brickworks since the middle of the eighteenth century and will it is expected to be feued for the erection of dwelling houses, the northern boundary abutting on Portobello’s extended promenade. The new works will have modern equipment with seven spacious drying sheds, three of them on two storeys.  There will be a huge fourteen chambered kiln ( Vaughan’s patent) capable of firing 20,000 bricks per day. Steam or electricity will supply the driving power for the potters wheels instead of hand labour. 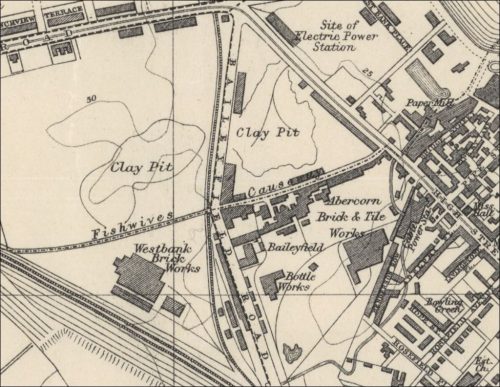 1936 – The works closed as the clay pit was now exhausted.

23/12/1936 – The Scotsman – Brick Works to close – Portobello firms decision  – clay field exhausted. The clay brick industry in Portobello, Edinburgh will come to an end shortly, the well known firm of Peter Mitchell & Sons (Ltd) at West Bank, Baileyfield having announced their intention of closing down before next year. The cessation of work will mean the throwing out of employment, of over 70 workers but they will not all leave at the same time. Some of them will be retained to dismantle the works. Exhaustion of the clay available is the cause of the works closing at a time when there is a shortage of bricks of the type made by the firm. There is still a quantity of clay in Portobello but it cannot be worked owing to the fact that either the railway runs over it or it is built over. The field which is being closed down has lasted about 35 years. Before 1906 the firm worked a clay bed where the Edinburgh Corporation Electric Power Station now stands. They took over the works form the late Mrs Brodie Sherriff in 1890. When they removed to Fishwives Causeway at the back of the Baileyfield Locomotive Works, they erected a new up to date plant.  Since 1750 bricks have been made in the neighbourhood of Portobello and will still be made in the district. They will not, however, be of the clay variety but will be of a composite character. It is expected that the firm responsible for them and other Edinburgh firms will be more or less able to cope with the demand though a representative of Messrs Mitchell & Sons acknowledged yesterday that there was a shortage of bricks and that bricks were being imported into Edinburgh from the West of Scotland despite the additional cost of haulage. Messrs Mitchell & Son made tiles and pottery as well as bricks and their decision to go out of existence will be a decided blow to industrial Portobello. 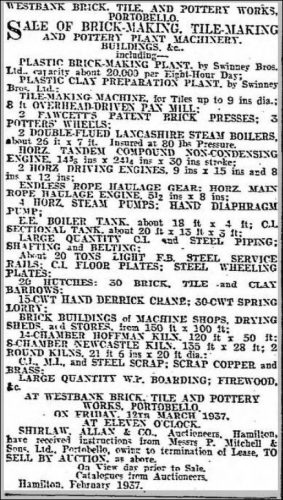 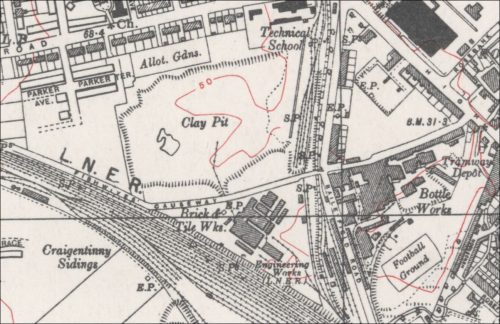