08/01/1844 – Glasgow Herald – Winter Circuit Court of Judiciary  05/01/1844 – Thomas Dollan and Marion King were accused of assaulting and robbing a brick and tile maker in Paisley. From the evidence, it appeared that the assault took place near Nether Common Brickwork and that the party assaulted had been severely handled. The prisoners pleaded not guilty but were found guilty as libelled and sentenced each to seven years transportation. (Note – SBH – I am uncertain whether this entry relates to the Galt Brickworks at Nether Common or the Shortroods Brickworks site).

Below – 29/08/1860 – Glasgow Herald – Land of Shortroods for sale, belonging to the Estate of the late Robert Carswell … The lands contain clay suited for making bricks … 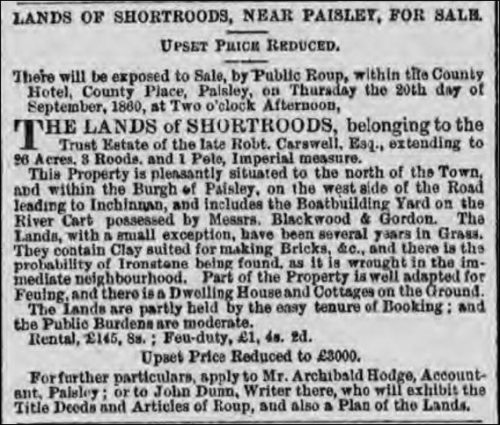 Below – 30/03/1868 – Glasgow Herald – Drain pipes and tiles of all sizes and of the best quality are for sale by the subscribers. Prices are given on application for delivery – at the Railway Station, Paisley; on board vessels, Paisley; at suitable landing places in the River Clyde and Western Highlands; at any of the Stations on the Ayrshire, Caledonian and Greenock Railways &c &c Robert Brown & Son, Caledonian and Shortroods, Brick and Drain Tile Works, Paisley. March 1868.

Below – 19/09/1868 – Paisley Herald – The new buildings and street committee. Messrs Robert Brown & Son, of Shortroods and Caledonia Brick and Tile Works, had submitted to the Committee a ground plan of several buildings to be erected by them for another new work between Inchinnan Road and the River Cart, giving notice that the chimney stalk would be 130 feet in height, and also notifying that they intended to cover and divert Bullfauld Burn. The Committee allowed the erections to proceeded with but agreed to give no opinion as to the height of the stalk, and no sanction in regard to the diversion of Bullfauld Burn, that in case existing rights might be affected, the Messrs Brown alone might be held responsible.

02/08/1869 – Glasgow Herald – A number of horses suitable for light work are for sale at the Shortroods Brickworks, Paisley in consequence of operations being stopped for the season.

Below – 1870 – Advert For Robert Brown Ferguslie Fire Clay Works and Caledonia and Shortroods Brick and Drain Pipe and Tile Works, Paisley and 1875 – 1876 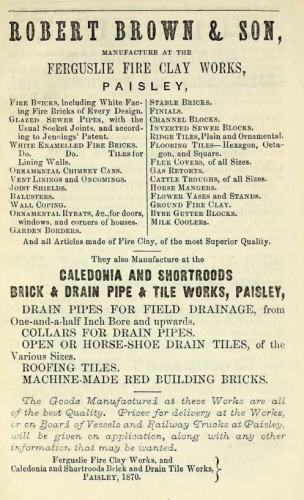 12/02/1870 – Renfrewshire Independent – Paisley – Advantages for the erection of public works in Paisley. Some time since it was agreed to form a branch railway in connection with the burgh lands in the vicinity of the Greenock Road, with the view of encouraging the proprietors of large works to erect their places of manufacture thereon. This railway has now been completed, and has been connected with the extensive brick and tile works of Messrs Brown at Shortroods, and also with the new fireclay works of Messrs Speirs, Gibb, & Young, in that vicinity, and already its advantages are clearly perceptible from the considerable traffic which passed over the railway from these works alone. Ground for public works in connection with this branch railway is offered by the burgh at a feu-duty of 1s 6d per pole only, which of itself is a great inducement, and well worthy of the attention of gentlemen in Glasgow and elsewhere having the erection of public works in contemplation. In addition to the cheapness of the land, and the advantages of a direct communication with the Caledonian Railway, Paisley has now an abundant water supply, and gas at a very cheap rate, while the public burdens are also comparatively low. 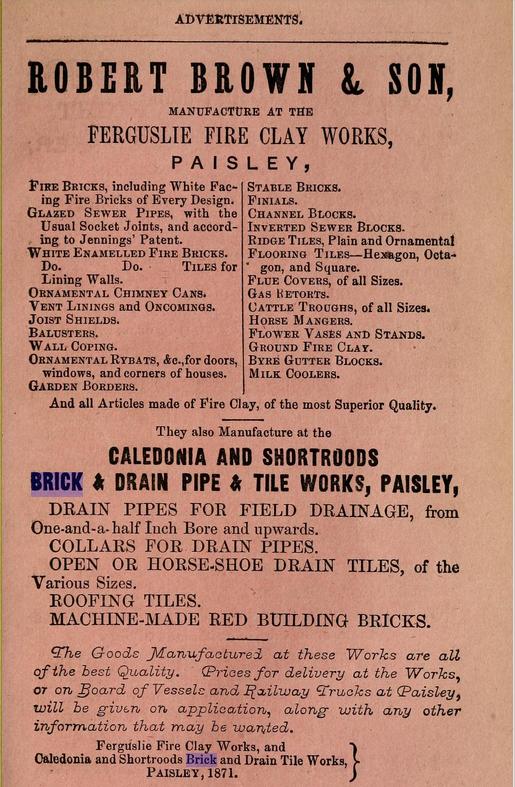 01/07/1871 – Renfrewshire Independent – Excursion – On Saturday last the workers of Messrs Brown & Son, Ferguslie Fireclay Works, Paisley, and Shortroods Brickworks, had their third annual excursion. About 600 workers and friends left for Renfrew by rail and met the steamer Hero, which was especially engaged for the occasion. The excursionists then proceeded to Largs, where they spent a very pleasant day. They were accompanied by the rifle band, which contributed in no small degree to the pleasure of the party.

30/03/1874 – Glasgow Herald – Brick building – We beg to intimate that Messrs Bell and Mclauchlan, brick builders, No 2 Glen Lane, Paisley have taken a lease at a part of the brick works at Shortroods, Paisley and we have therefore ceased to manufacture red building bricks and to execute brick building work. As Messrs Bell and McLauchlan were foremen to us in our brick building department for many years we can with the utmost guarantee recommend them to parties with whom we done business and to the public generally. We also beg to intimate that we still continue to carry on the manufacture of drain pipes and tiles for field drainage at Shortroods and likewise to manufacture glazed sewerage pipes and every class of fire clay goods at the Ferguslie Fire Clay Works, Paisley. – Robert Brown & Son, Paisley 27/03/1874.

01/04/1874 – Glasgow Herald – Going Brick Work to let – A field of clay at Shortroods Brickworks, Paisley along with a brick making machine, a steam engine and every necessary apparatus connected with brick making for such a number of years as may be agreed upon. The clay is of the best quality and the brick making machine is of the newest and most approved description and ready for commencing operations. The brickwork is connected by railway with the Caledonian Railway and also with a wharf close at hand on the side of the River Cart. Apply to Robert Brown, Sneddon Bridges, Paisley. 31/03/1874.

07/03/1877 – Glasgow Herald – Going brickwork to be let. A brickwork at Shortroods, Paisley to be let for a term of years. The clay is of the best quality and teh machinery of the most approved kind. The work is connected with the Caledonian Railway and with a wharf on teh River Cart. Apply to Robert Brown, Sneddon Bridge, Paisley.

21/02/1880 – Paisley and Renfrewshire Gazette – A brickworks at Shortroods, Paisley to be let for a term of years. The clay is of the best quality and the machinery of the most approved kind. The work is connected by a branch railway with the Caledonian Railway and a wharf on the River Cart. Apply to Robert Brown, Sneddon Bridge, Paisley. 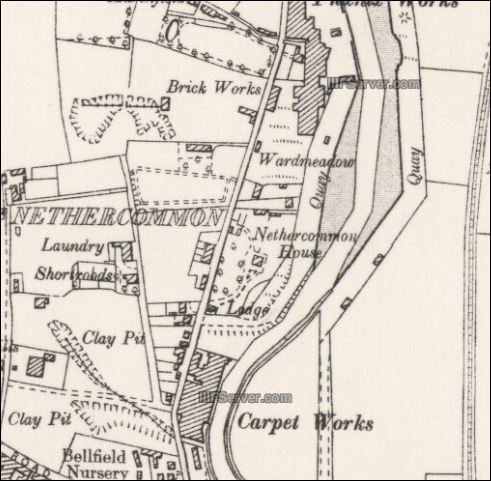 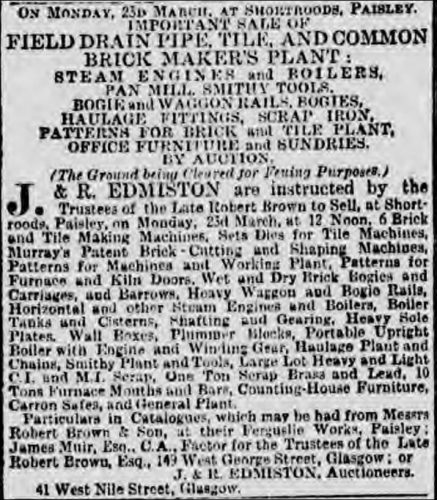 Robert Brown was born at Rainger Home farm, East Kilbride, 15th July 1810. In 1815, his parents moved to Nether Capellie Farm, Neilston, and the boy’s first responsibility was to herd on the braes above Glen Killoch until he reached school age. He was educated at Neilston parish school and showed an aptitude for Latin and Greek and Arithmetic, the intention being that he should proceed to the University.

This intention was departed from, and came to Paisley in 1827 and had built his home ‘Underwood Park’ on Underwood Road. Subsequently going to Glasgow, he acted for a time as reporter and sub-editor of the Chronicle newspaper, which helped to give a literary bias to his inclinations. In 1834, he was appointed Town Chamberlain to the Burgh of Paisley, and in 1845 was an accountant and share broker in Buchanan Street, Glasgow.

Having acquired the property of Ferguslie in 1850, he founded the Ferguslie Fire-clay Works. The firm originally produced fireclay linings for furnaces, garden ornaments and statuary for gardens and by 1876 the business had expanded to the manufacture of white sanitary earthenware, wall tiles and bricks. Browns Brickworks remained a significant manufacturer and employer until the mid-1970s.

In 1854, he entered the Town Council for the Fourth Ward, and two years after, in 1856 was elected Provost of Paisley, as which he served until 1859. Retired from his term in office he turned to literary work, the result being the publication of a series of works: History of the High Church, History of the Grammar School and Academy, History of Burns Clubs, Memoirs of Paisley Poets, and his greatest work, A History of Paisley, he is also believed to be the author of the ‘Paisley Pamphlets’, a collection of ephemera rich in social history covering the period 1739 – 1893