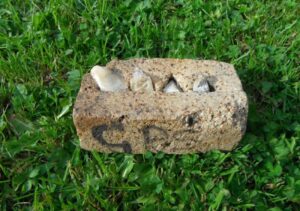 This wonderful example of a set of Seger cones was found by Ian Suddaby on the site of the old Bonnyside Brickworks, Bonnybridge.

Ian states – Found in an almost dry small stream next to a disused brickworks near Falkirk, Central Scotland. Ideal for a detailed search and this was rewarded with the recovery of a used and damaged pyrometric cone block, used for measuring temperatures and time in ceramic kilns. It measures 4″ in length, 2″ in width and 1¼” thick. A three-letter word, probably GAS has been written on the side of the cone block. All of the four cones have been broken to some extent. This is a very rare find and it’s made all the more interesting by the survival of a Staffordshire Knot symbol on the base of one cone. 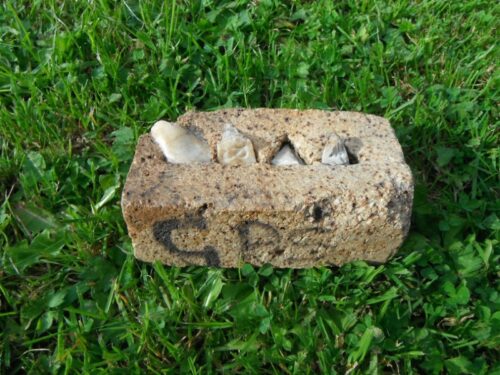 Below – Note the Staffordshire knot design on the 2nd cone from the left. 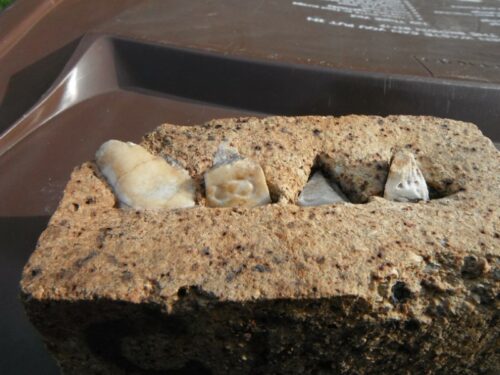 Harry Wilson states – Seger cones were used in the brick industry to check the temperature the bricks had been fired to. And to check the refractories of the brick, the refractories standard for most Scottish firebricks being given as +cone 32. The word ‘gas’ probably refers to the type of kiln it was to be used in. The sample you have was probably used in the gas chambers at Dougalls West works. I made up a lot of them in my young days in the lab. We filled a wooden mould with wet clay pushed in the appropriate numbered cones, supplied by the manufacturer, in increasing refractories from left to right ensuring the back face of the cone was vertical. This was then oven-dried ready for the setters to collect. The block was green when left in the kiln with the other green bricks to fire. If you look at the cone bases in the block, the first two on the left, show that they are completely fused showing that they had been heated to a higher temp than their melting points, while the latter two do not show the same amount of vitrification indicating that their melting point had not been reached.

Below – 11/02/1915 – Staffordshire Sentinel – At the meeting of the governors of the Central School of Science and Technology at Stoke, on Wednesday, there was another reference to the attempt which the school is making to capture a German industry. This is in regard to the manufacture of Seger cones used in standardising and controlling the firing of kilns, ovens and industrial furnaces, and in testing refractory materials. The cones derive their name from a German professor and before the war were manufactured in Charlottenburg, near Berlin. Dr Mellor told the governors on Wednesday that since the Stoke-on-Trent Education Committee had decided to fill the need that had arisen through the strangling of German commerce he had received a very large number of orders. The cones are branded with the Staffordshire knot. 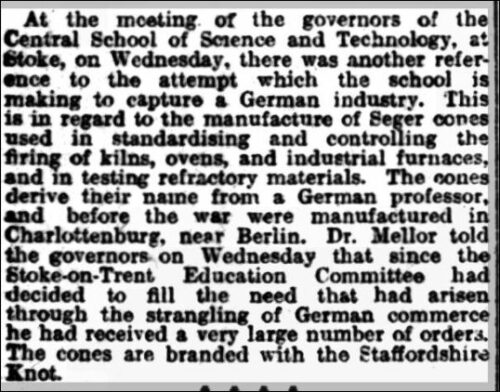 Below – Another 2 sets of Seger cones found by Ian Suddaby. Ian states – Two more blocks of used Seger Cones were found amongst waster bricks and ash at the Bonnyside Brickworks near Falkirk, Central Scotland. That’s three in total now but these two came from a different area of dumping. They’re both better than the first example and the white one is an especially good find. The pinkish cones are set in a carefully made rectangle of fireclay. Like the first find, these were made by The Central School of Science & Technology in Stoke, Staffordshire and they carry the Staffordshire Knot symbol. Datewise, after 1915. The white cones are better preserved and show very well how the cones melted in sequence from left to right. The left one has been transformed into a mass of bubbles whereas the right one is almost intact. The right one also carries a mark, probably H 18. The base block of fireclay is however much more crudely formed. I don’t know who made these. Great finds from an often overlooked part of the brickmaking process. 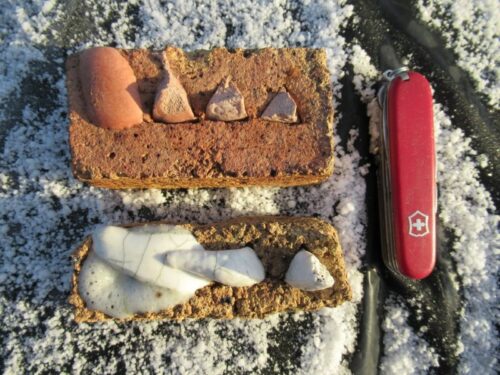 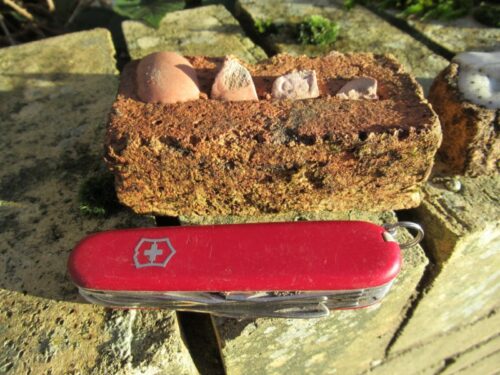 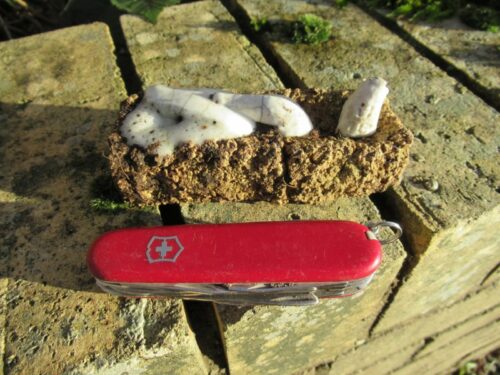