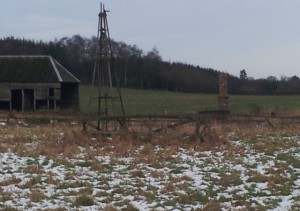 This brick & tile works does not appear on the Muirhouselaw farm plan of 1841 (NT62NW 68, see B78643) although it is shown on the 1st edition OS 6-inch map (Roxburghshire, 1859, sheet XIV) and is described as the “Old Muirhouselaw Tileworks” on the OS 25-inch map (Roxburghshire, 1922, sheet XIV). The site has been cleared except for the SW end of a dwelling range which now includes a byre and a stable. Pieces of over-fired field drain can be found on the site.
Visited by RCAHMS (GJD) 30 March 1993.

1858 – 1860 – ScotlandsPlaces – Brick and Tile Works, Muirhouselaw. William Fleming, brickmaster. William Dodds, Muirhouselaw. John Darling, Muirhouselaw. This name applies to a building used for the purpose of making bricks and tiles, it is on the farm of Muirhouselaw, and the property of John Ord Esqr. 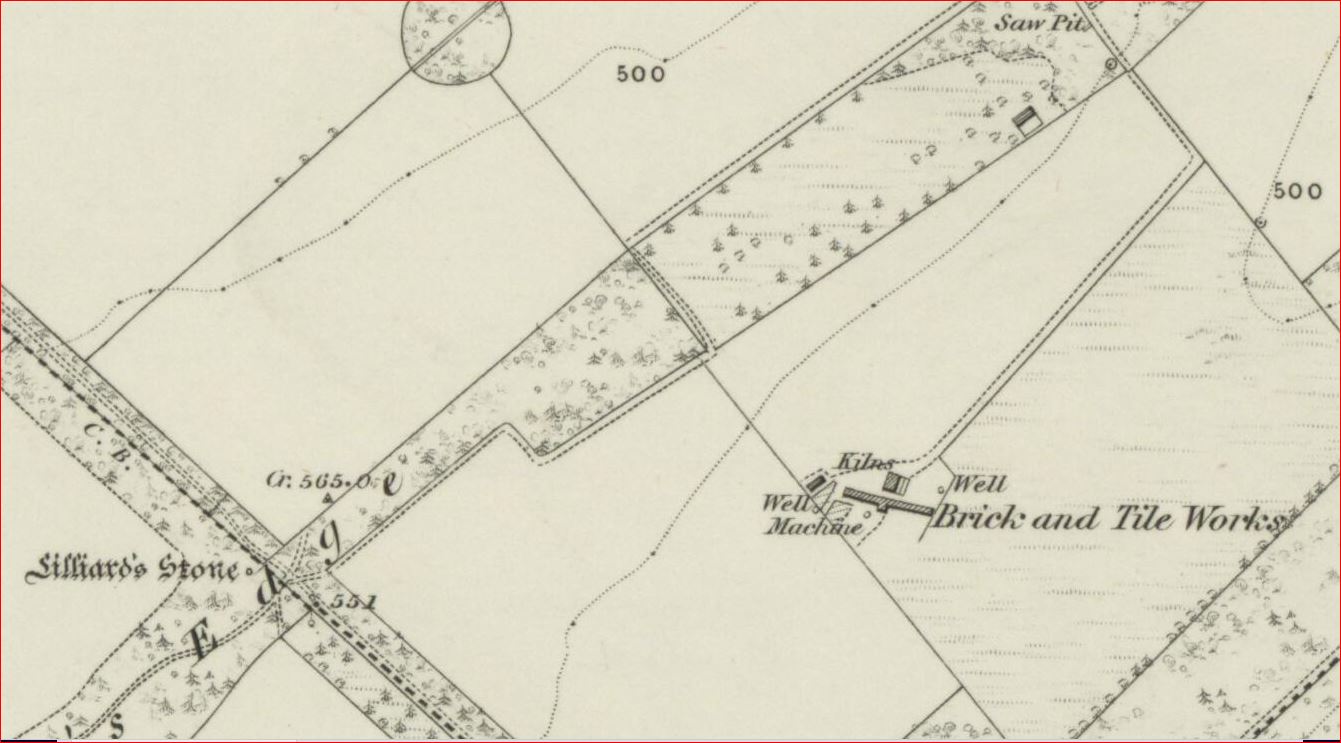 Below – 29/10/1872 – Berwickshire News and General Advertiser – Muirhouselaw Tileworks for rent. 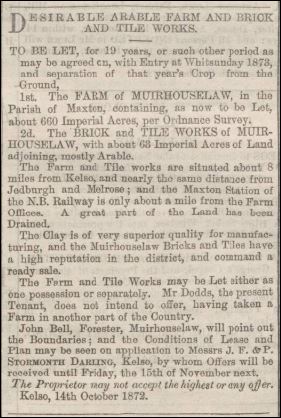 24/05/1873 – Jedburgh Gazette  – Muirhouselaw displenishing sale – On Wednesday the whole farm stock and agricultural utensils in connection with the farm of Muirhouselaw, occupied by Mr Dodds were disposed of by public auction. Dodds was the out going tenant. Mr Ord was the proprietor. At lunchtime, everyone retired for a formal organised meal with toasts and speeches. Mr Dodds proposed the incoming tenants, Messrs Whitson to the tile works and Messrs Ormiston to the farm.

28/06/1873 – Jedburgh Gazette – Estimated wanted for the mason, joiner, slater and plaster works of cottages, stable, barn and byre, proposed to be erected at Muirhouselaw tile works in the Parish of Maxton.

ST Boswells – Accident to a boy.- On Tuesday last, an accident of a serious and painful nature occurred to a boy, eight years of age, son of Mr Whitson, one of the lessees of Muirhouselaw Tileworks.  It appears that the boy’s hand had accidentally come in contact with the bruiser used for crushing the clay at the tile works, which drew in his fingers; and so fearfully were they mutilated that amputation was found necessary.  Unfavourable symptoms, however, began to appear on Monday, when there was no other alternative left but to amputate the whole hand, which was successfully done by Drs Bell, Dewar, and Lundy.  The little sufferer is now doing as well as might be expected 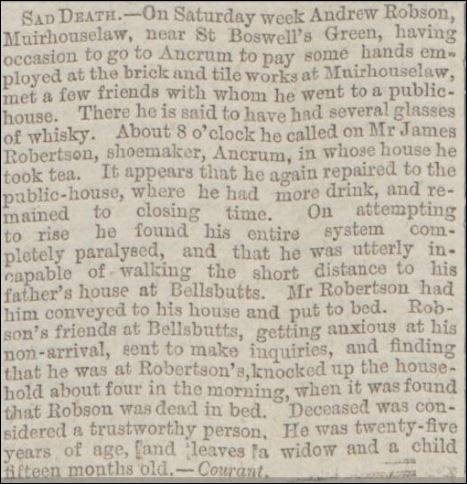 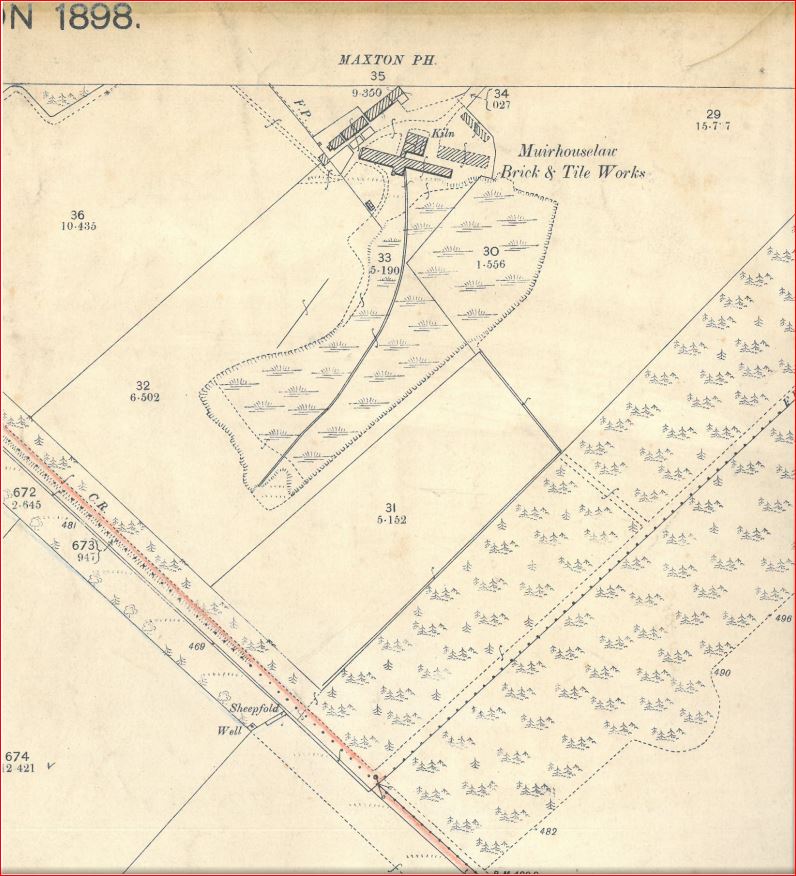 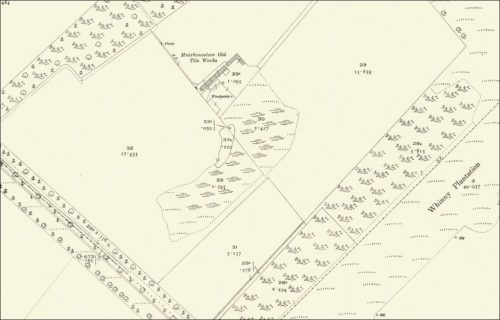 The following bricks were on-site  – Whitehill and Hood were the only marked bricks. The stable fools and the Cottage walls were all made from unmarked red clay bricks and a number of drainage bricks were lying around as well as red clay roofing tiles which were not present on any building roofs, so they were either being made there or they clad the roofs prior to slate. Due to the large number of waste and firing damage bricks, it is a fair assumption to say that the red clay bricks were being made on site.

Below are 3 different ‘drainage’ bricks with end views showing the different style of ‘drain’. The middle and bottom brick appears to have been lifted with a lifting tool. 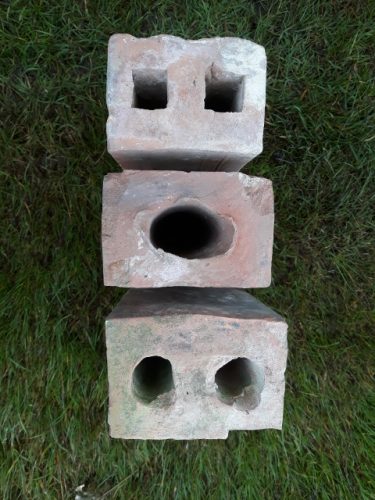 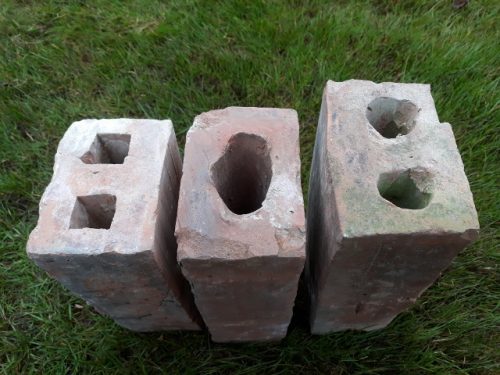 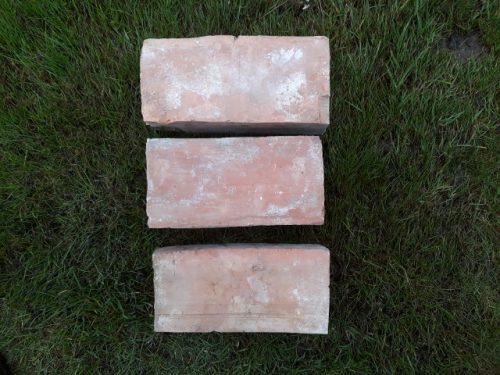 Below – Another brick found on-site with the 2 longitudinal voids but it also shows an unusual ‘serrated’ edges to the brick. It again shows evidence of a lifting tool having been used on this brick. 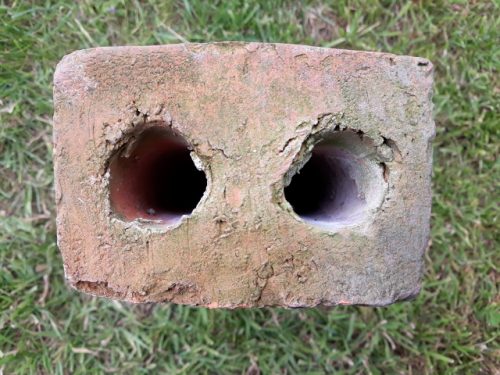 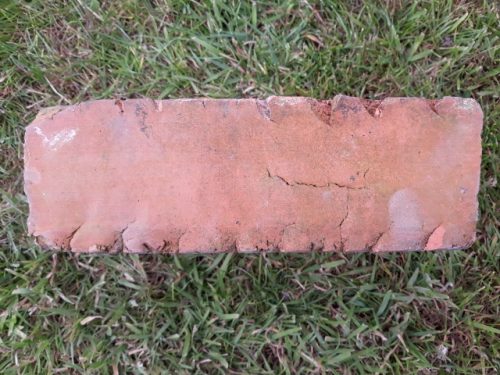 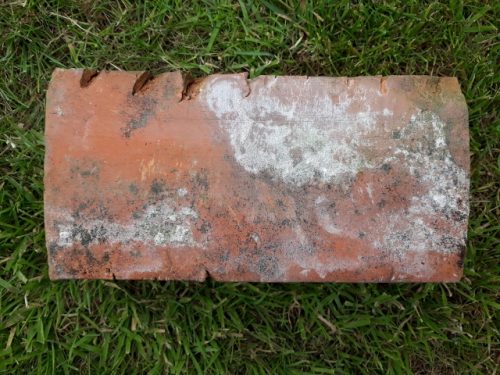 Below –  Broken brick which has ‘blown’ during firing. 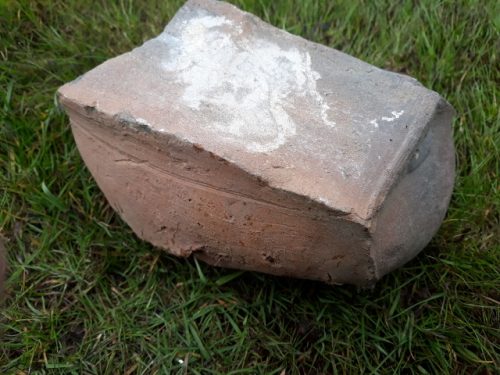 Below – The broken brick is shown with 2 fingerprints. 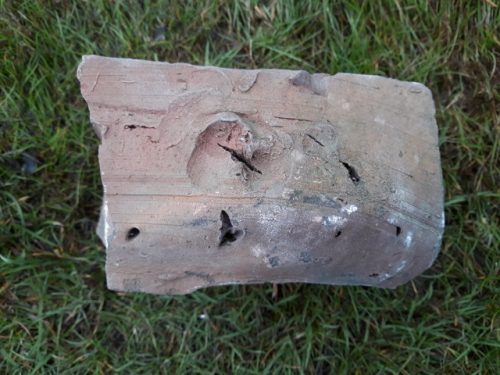 Below – Roofing tile measuring 10″ wide by 15″ long and found on-site and most likely made there. 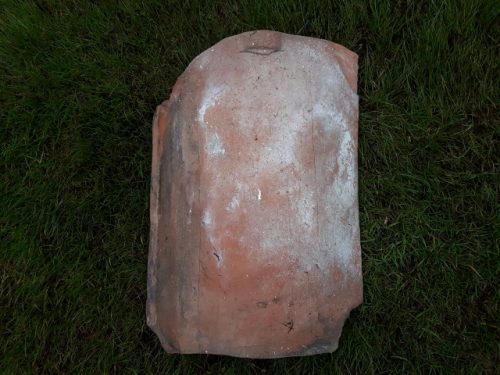 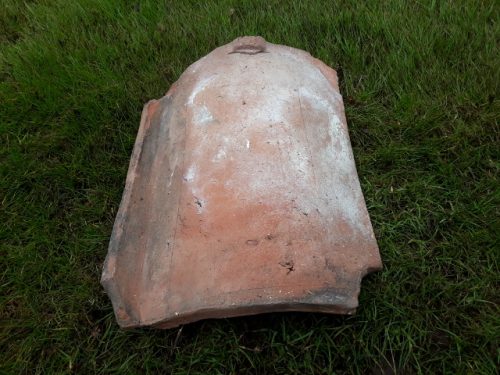 Below – The following views show what is some sort of chimney alongside water tanks perhaps for tempering or pugging the clay? They also show what appears to be the remains of a windmill, possibly for drawing water. There are also inside shots showing a Carron heater, sinks and what appears to be a brick-built oven or boiler. 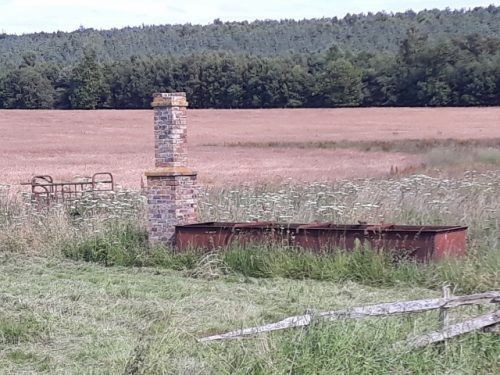 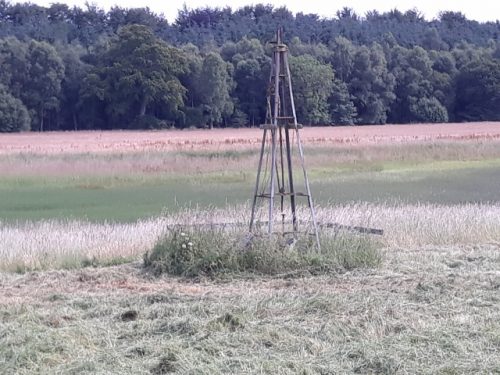 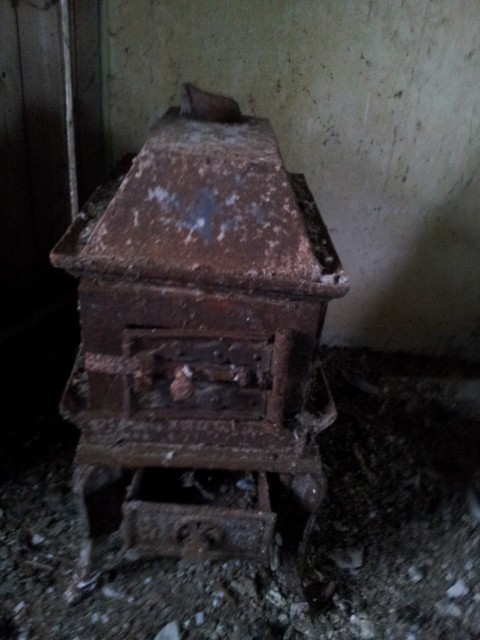 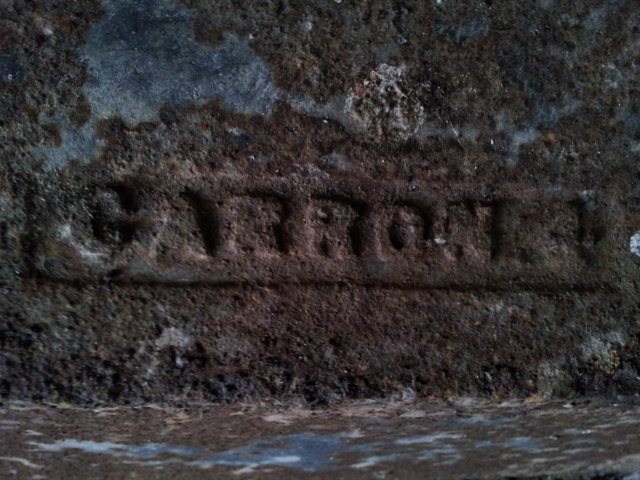 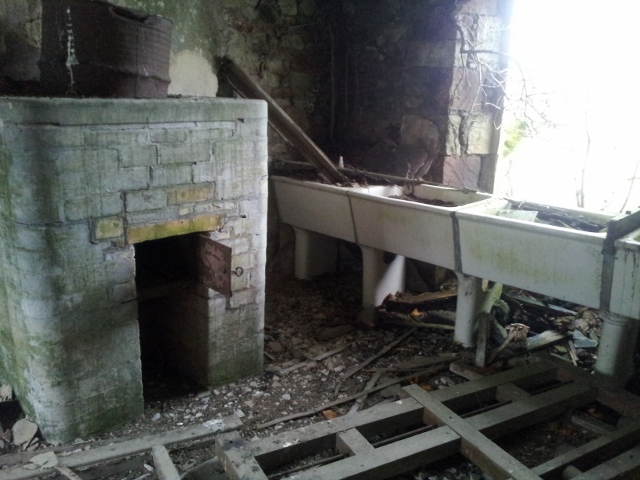 Below – the middle and bottom bricks were kindly donated by David Cain and they were found on site. They show the distinct marks left by the tool the brick workers used to move the bricks about while ‘green’. Brick size  8 3/4″ x 4 1/4″ x 3″. The width of the top row of marks is 3″ and the bottom row is 2″.

You can also see part of the outline of the wood or metal frame that held the 5 spikes or prongs.

The top brick was also found on-site and has the same prong marks on the underside. The brick is photographed as it appears as there are 2 fingerprints to be seen on this side. 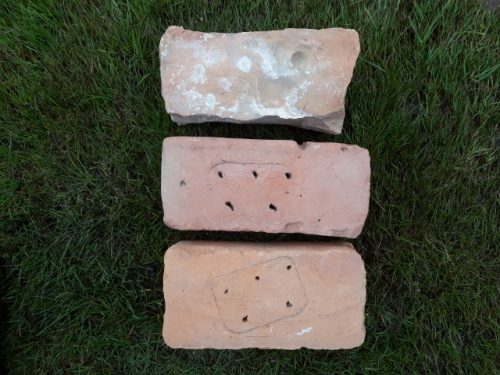 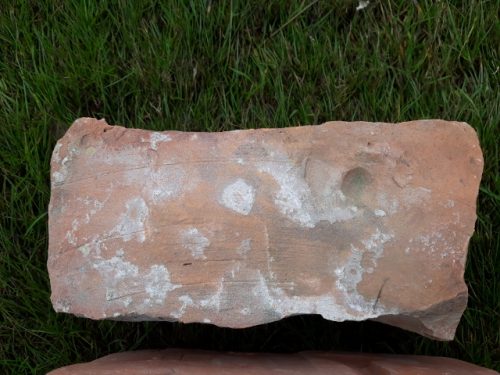 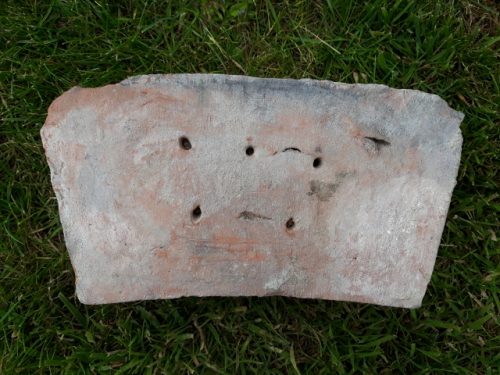