10/05/1892 – The Glasgow Herald  – As everybody knows, bricks are largely used in most buildings, but in Scotland only in partitioning and dividing apartments. Up to a recent period few people in Scotland would have thought of using brick instead of stone in facing their houses: and in such a city as Glasgow, it would have been thought incongruous to erect a brick building of any value or pretension to taste. This was due in great measure to the excellent white freestone we have had in Scotland and to the fact that our clay was not equal to produce such bricks as were manufactured in England. A gradual change is taking place in this respect. White freestone has become nearly exhausted and the red freestone is rapidly taking its place and terracotta is competing with both. A splendid block of buildings was recently erected by the Prudential Insurance Company in Renfield Street of this city, faced with the finest English brick from Ruabon in Wales. In the country, there are springing up a few fine palatial residences, brilliant with the red terracotta brick. And the Fine Art Galleries and the New Conservative Club, both about to be erected in Glasgow are to be built from this terracotta brick. Under these circumstances, it may seem singular that this clay which has been so often sought for and long wanted, has been found and that this terracotta manufacture, which has hitherto been confined to England and Wales, will now be carried on at Braidwood on the Estate of Simon MacDonald Lockhart, Baronet of Lee and the material , it is said, can be produced at a price which will stimulate and encourage the erection of terracotta buildings throughout Scotland. The Omoa Fireclay Company are busy erecting works on the Caledonian Railway near Braidwood, with all the latest machinery improvements and these works will shortly be in operation. (Note – SBH – There is a reference to terracotta manufacture at Braidwood but I am uncertain to which of the Braidwood Brickworks this refers to so I have noted it here to ensure it is not missed) 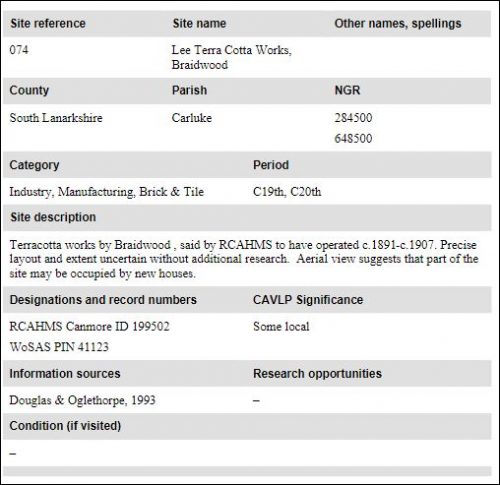